Herstory: Ireland's Epic Women is a six-part documentary series on RTÉ exploring the lives of six remarkable Irish women whose work changed the lives of others, and in many cases, the course of history.

Before Amelia Earhart and Amy Johnson, there was Lady Mary Heath, the original heroine of the skies. Born Sophie Peirce-Evans in Limerick in 1896, she went on to become the first person, woman or man, to fly solo across Africa from South Africa to London, an epic journey she undertook in an openair cockpit.

It was a perilous 10,000-mile journey during which she battled heatstroke in 100 degree heat and crashed in Zimbabwe. At one stage she was reported dead. This extraordinary Irish woman soared above the odds to become the most famous aviator in the world. 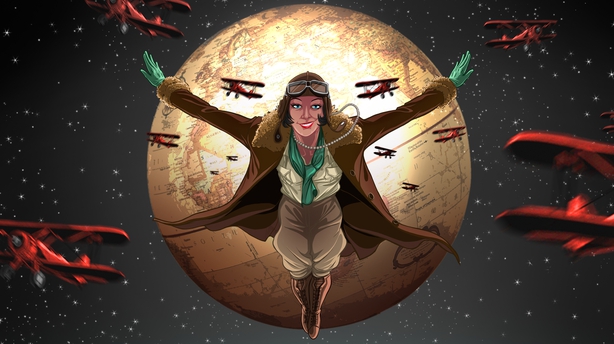 Sophie had a turbulent start to life. When she was only a year old, her father beat her mother to death. The police arrived to find the infant Sophie sitting beside her mother's lifeless body. After a sensational trial which made headlines across Ireland, her father was locked up in a lunatic asylum for the criminally insane. Sophie was reared by her grandparents and went on to study at the Royal College for Science for Ireland in Dublin.

She was a gifted athlete and became a (disputed) high jump world record holder. It was her love of athletics that sparked her adoration for aviation.

In 1925 she undertook her maiden solo flight to Prague to address the Olympic Congress, where she campaigned to have women’s athletics accepted at the Olympic Games. In the early 1920s, women were barred from performing at the Olympics, with the exception of genteel sports such as archery.

Not one to kowtow to the male establishment, she flaunted her femininity, taking to the skies adorned in a mink fur coat, pearls and high heels. In this, the golden age of pioneering aviation, women were allowed to fly for themselves but they were banned from carrying passengers or, heaven forbid, earning a living from their sport. According to the International Commission for Aviation, women’s menstrual cycles were a disability which made them unfit to serve as commercial pilots.

Undeterred she took on the patriarchy and became the first female commercial pilot in the U.K. but not before she was subjected to arduous physical tests whilst on her menstrual cycle. She won her license but no airline was willing to employ her.

As if the extreme sexism wasn't enough, she endured racism when she married her third husband, a handsome Trinidadian jockey called Jack Williams. Jack was referred to as 'the little n****er' in social circles and her advertising endorsements abruptly stopped. True to herself, she ignored them all and enjoyed a long, happy marriage with Jack until her dipsomania drove them apart.

11 years after her world-famous triumph of the skies, she died after years battling a serious alcohol problem when she fell down the stairs of a London tram and suffered severe head injuries.

Herstory: Ireland's Epic Women, RTÉ One, Mondays at 8.30pm from February 3rd - post-broadcast, all episodes will be available for catch-up on RTÉ Player and RTÉ Culture.

Biography: Dr Angela Byrne, for the Irish Embassy exhibition 'Blazing a Trail: Lives and Legacies of Irish Diaspora Women', a collaboration between Herstory, EPIC The Irish Emigration Museum and the Department of Foreign Affairs and Trade.