Via The Journal Of Music : MÁM by Michael Keegan-Dolan and dance company Teaċ Daṁsa, featuring concertina player Cormac Begley and the Berlin-based collective s t a r g a z e, is currently on tour.

The mysterious, mythic MÁM, a work of intimately interwoven music and dance, is finally on tour in Ireland. It follows an acclaimed debut run: premiering in the Dublin Theatre Festival in 2019, it went on to Sadler's Wells in London; it was very well received by the press and was nominated for several prizes, including the 2020 Olivier Award for Best New Production. So its reputation precedes it, and indeed there was a vivid sense of an event in Portarlington on Friday night.

Listen: Cormac Begley talks MÁM on Marty In The Morning

The publicity surrounding MÁM refrains from saying what exactly it is; rightly so, as it is a singular experience. To be sure, one can say this much: it is an evening-length work of contemporary dance choreographed by Michael Keegan-Dolan and danced by his dance company, Teaċ Daṁsa, with live music by Cormac Begley and the Berlin-based collective s t a r g a z e, and with a young girl (Róisín Byrne Dunne) in a white dress at its centre. But this way of putting it obscures some of the key aspects of this work. The work was devised over seven weeks in 2019 in the Kerry Gaeltacht where both Keegan-Dolan and Begley live, and its initial impulse was pure improvisation: Pat Collins’ fascinating documentary The Dance (2021), which charts the slow genesis of the work from the somatic sparks and ideas of Teaċ Daṁsa, shows just how collective a work this is – and indeed the liner notes credit Keegan-Dolan as 'stewarding’ the work ‘in collaboration with’ the company, rather than more straightforwardly as choreographing or directing it. This slow formation did not happen independently of the music, either, and so it’s also misleading to call this work ‘dance’, as if the music is secondary. The Dance also shows us how Begley was present throughout the development of MÁM, and how the music not only accompanies the dance, but how the dance was devised specifically in response to Begley’s playing, which in turn was informed by the development of the dance.

This tight connection of music and dance in the creation of MÁM is evident in the final work. The dancing is vivid, bold and full of rhythm, just as Begley’s concertina playing is; even more particularly, Begley makes his concertina breathe and huff by expanding the bellows without playing any notes, and breath, often violent, is a recurring motif in MÁM. More profoundly than this, though, is how the dance emanates from an Irish musical sensibility. For instance, all the dancers are always on stage: when they are not dancing, they place themselves at ease somewhere on the stage to watch those who are, but they are never entirely unwatched: they are visibly waiting for their next dance. This elision of ‘performer’ and ‘audience’ is common in Irish traditional music, where everyone is, or might be, a dancer in a céilí or set, but at any given moment only a few will be; and where the ‘audience’ is constantly being scanned, and knows itself to be scanned, for potential dance partners.

MÁM is a bold work: its movements are strong, open, passionate. But it can nevertheless refuse interpretation. There are moments where the dancers are forcefully doing something, but whether that something is love or war, jubilant or desperate, is ambiguous. In one scene, one dancer gallops with abandon around the stage, embracing every other dancer as well as most of the musicians – but after each kiss, the other falls down (sated or killed?), and the dance ends with all of the others waking up and pairing off, with only the embracer, that love-full grasshopper, alone. In another scene, two dancers waltz closely together while headbanging with a speed and ferocity that suggests that each wants to kill the other even at the cost of suicide.

War, indeed, is a theme throughout the work. The work opens with the company sitting in a row and uniformed all in black, except for the girl in a white dress in the centre. Begley, in a demonic goat head, gives the beat through the rasping of his concertina’s bellows, and the dancers lilt a tune, but through hammering out the beat with dancing shoes they give it an ominous heaviness. This dark opening is short-lived: Begley’s goat head doesn’t last more than a tune, the dancers gradually shed their heavy shoes and the men strip down to white shirts, but the battle tune ‘O’Neill’s March’ is a recurring tune, even at moments of what might seem to be ebullience.

The international musicians s t a r g a z e only enter the work about halfway through, but make a huge impact. They play a combination of their own contemporary jazz fusion and accompaniment to Begley’s traditional playing, and are equally convincing in both genres. This is particularly exciting in the latter case, and must be the result of the weeks they spent in Dingle honing their collaboration (a testament to how much they have internalised the music is that they perform entirely without scores). Their performances of the melodies are heavier than traditional musicians’ would be, but they use this as an effective contrast to Begley’s interpretations. More commonly, though, they support and complement the tunes. They fill out the harmonies with sophisticated, imaginative and clear textures, or juxtapose the tunes (sometimes violently) with music from their own tradition – whether that’s a Bach sarabande and gigue (classical music’s closest point of contact to airs and jigs) or original cool modern jazz.

But what of the girl in the white dress at the centre of all this? Keegan-Dolan talked in The Dance about how uninterested he was in justifying MÁM by reference to something intellectual, preferring the dance to speak for itself, and I have tried to respect this in this review. But there are parts of MÁM that only make sense as symbols, and the white-dressed girl is the most prominent of these. She looks like she is dressed for her first communion, and is both figuratively and often literally the centre. But she is a centre that is also somehow apart from everything: she only falteringly and occasionally dances, and for all that the dancers seem to perform for her, they just as much talk over her, shout across her, and sideline her. She gradually becomes instrumental to the proceedings. At the very end, she literally conducts the ensemble, but even this is a liminal position: a conductor is not quite a musician in their orchestra. So who is she? Perhaps she is the mám of the title. The Irish word ‘mám’ primarily means ‘mountain pass’. As Manchán Magan observes in the brief programme notes, it is thus an ambivalent word: a route through somewhere otherwise impassable, but still difficult and treacherous. MÁM seems to say that the mám of Irish music is each next generation: something that can carry the music forward, but something which is (as yet) weak, which is on the cusp of collapse from the trauma it receives at the hands of those previous generations whose yoke it inherits (‘yoke’ is another translation of ‘mám’), but something which nevertheless has the final power of controlling how the tradition is carried forward.

No doubt this is just one possible interpretation of this work, which for all its incorporation of love and war and history, as well as things I have not even mentioned (such as rebirth and religion), is a work that stands strongest on its own feet: as a rich, confident, enthralling unity of dance and music.

MÁM is currently on tour through November, and can be seen at Mullahoran Community Centre in Cavan on the 12th and 13th, Lime Tree Theatre in Limerick on the 16th and 17th,The Sports Complex in Boyle on the 19th and 20th, and Black Box Theatre in Galway on the 23rd and 24th. It is sold out in the Pavillion Theatre in Dún Laoghaire on the 26th and 27th. Find out more here.

Read more from the Journal Of Music here. 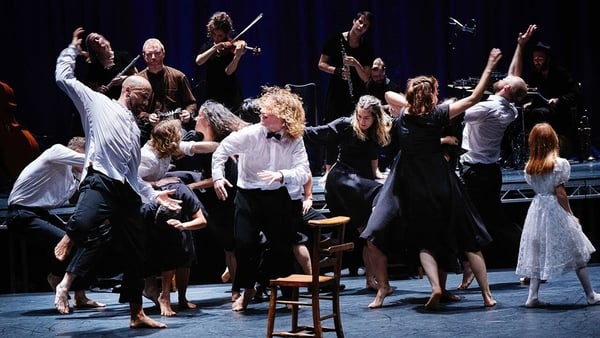 Lord of The Dance - Michael Keegan-Dolan talks to RTÉ Arena