Ahead of his appearance at this year's Galway Comedy Festival, Sínann Fetherston speaks with Belfast comedy clown Paul Currie about his five-star Edinburgh run, mental health and getting support from fellow comics.

"This is all going to sound a bit wanky," Paul Currie admits while explaining the inspiration behind the title of his latest show (The Chorus of Ghosts Living In My Skull Keep Telling Me To Take A S**T In The Fruit Salad).

"Before lockdown I was in New York in a little second hand bookshop in Brooklyn and I saw this book, and there was a quote somewhere and it was something like that but I couldn't remember it fully so it's sort of based on that."

"It fits into a lot of the mental health stuff that I talk about in my comedy in general, the intrusive thoughts and s**t like that. It also fitted the completely surreal side of the comedy I do. A little mish-mash of complete nonsense and complete honesty."

I'm speaking to the non-binary Northern Irish comic (who uses they/them/her/him pronouns) ahead of his appearance at the Galway Comedy Festival this October, fresh from his month run at the Edinburgh Fringe Festival - the world's largest arts and media festival.

Numbers-wise, he says its been his most successful Fringe run to date. What's more impressive is that he didn't spend a cent on advertising. Instead, the success of the show grew by word of mouth, constant flyering, and five-star reviews from both critics and fellow comics.

As someone who prides themselves on being a little bit anti-establishment, Currie seems particularly thrilled with this achievement.

"I know a lot of comedians don't want to or aren't capable of going out to do what I do. I'm very lucky to come from a circus and street performing background so I'm used to being face-to-face and looking audiences in the eye and saying 'come see my show'."

"I use a different technique every year, and this year I was very humble," he laughs. "I very gently invited people."

As well as single handedly selling out a 150-seater venue for 22 nights in a row during the festival, Currie says that earning a five-star review from fellow comedian Stewart Lee will remain a highlight of the year.

"That was a total fluke. He goes around to a lot of shows every year and I just so happened... something clicked with him in this show. That's Edinburgh for you, it's such a gamble."

"I got some weird reviews this year. I read one review, I don't know who the guy was, but he just did not want to enjoy it. It was a horrible review, so it's swings and roundabout. It's great to have Stewart Lee giving it a bit of gravitas."

"I was worried because my stand-up is not Stewart Lee stand-up," he adds, "I was worried people were going to come along and expect quite clever, high-brow, witty, microphone stand-up - and that is not what I do."

Stepping far away from traditional stand-up, the performer describes his comedy as a "fusion" of his many passions and varied influences including the likes of George Carlin, Maria Bamford and The Mighty Boosh.

Billed as an "existential genre-defying rollercoaster ride of rule-breaking stand-up comedy", Chorus of Ghosts remains true to form for Currie, exposing vulnerability through the absurd, and looking into serious topics like gender, religion and the patriarchy through the lens of a clown.

"I like to ride that fence of just complete absurdity and complete honesty," he continues. "I like luring people in to childlike nonsense and then pulling the rug from under the seat and throwing topics like gender or denouncing religion in a quick slap to the face, and then moving on to more complete nonsense."

"It's like a kid's show for adults. You lure them in with all the bells and whistles of advertising. I did work in advertising, for my sins, for a very short period of time, so I know you have to get them quick. Hit them within 10 seconds with what you're selling."

"Essentially, I'm just trying to sell them a bit of fun while taking about the big issues, but in a very succinct way."

You can catch Paul Currie at the Galway Comedy Festival on Friday October 28th - click here for more info. 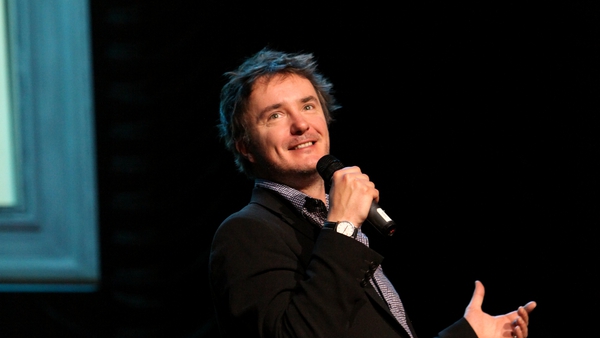