We present an extract from Girls Who Slay Monsters: Daring Tales of Ireland's Forgotten Goddesses, the new book for young readers by Ellen Ryan, with iillustrations by Shona Shirley Macdonald.

Have you heard of Eithne the supernatural scholar or Fand the shape-shifting ecowarrior? What about Bé Mannair, a gender-fluid spy who challenges an entire army, or Bé Binn, a giantess who overcomes the bullies who body shamed her? From mermaids and fashionistas to athletes and farmers, meet goddesses of all shapes and sizes from Ireland's ancient myths. Stand by their sides as they wield magic, fight monsters, and protect the powerless – and you might discover that you, too, are a force of nature.

Bé Mannair (Bay Man-air) was a beautiful goddess known for her pretty freckles and butterscotch-coloured hair. But she wasn't happy with how she looked because she didn’t feel like a girl inside and wondered if she’d be more comfortable as a boy. The goddess felt trapped in her body – and sometimes felt like scratching her way out of her skin.

To distract from such sadness, Bé Mannair focused on becoming a great soldier and general like her mother, Áincel. They both lived in the Otherworld army barracks, a towering gold fortress guarded by swarms of bright pink bees. Here, legions of soldiers trained in huge golden halls that echoed with the ring of striking swords and the steady clap of marching feet.

But Bé Mannair wasn’t as strong as the boy soldiers or as skilful a fighter as her mother. Being different was lonely. One day at training, she got so frustrated that she screamed aloud, 'I wish I were a bird so I could fly away!’

At once the goddess doubled up in pain. She felt as though invisible needles were trying to puncture her skin. After a few excruciating seconds, fluffy red feathers sprouted on her arms – just like wings. She had transformed into a bird! Painful though it was, Bé Mannair was delighted – she was able to shapeshift and was no longer trapped in her girlish body.

The goddess spent months practising her new skill until soon she could change into any animal, whether it slithered, swam, or crawled. She loved the freedom of switching from one form to another and was soon one of the most talented shapeshifters in the Otherworld. 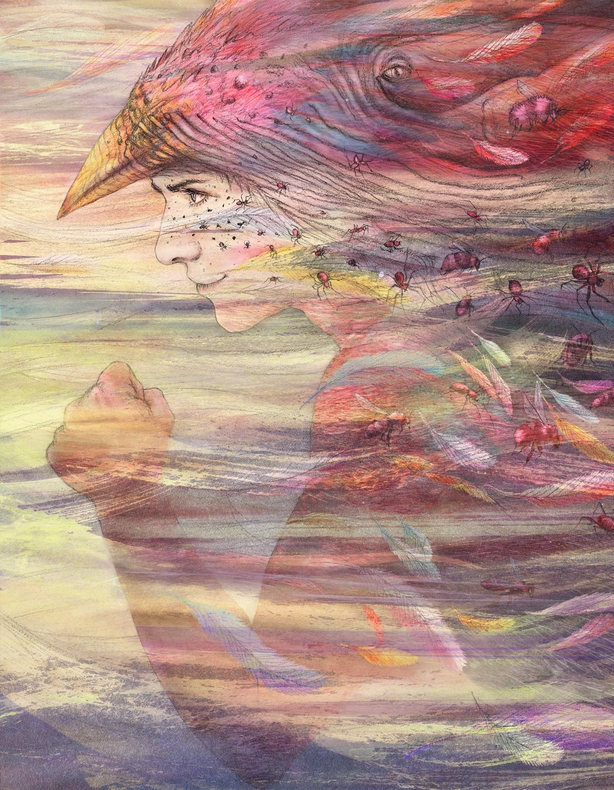 Thanks to Bé Mannair’s power, Áincel proudly selected her daughter to be an army secret agent.

‘Soldier,’ she told Bé Mannair, ‘your mission is to go to Ireland and spy on a band of mortal warrior men known as the Fianna. They are rumoured to be plotting against the gods. We need you to root out their secrets and report back to the barracks.’

Bé Mannair was thrilled to be of use to her people and felt she had found her true purpose. ‘They’ll never see me coming, Mamaí – I mean, General! I won’t let you down.’

Immediately, Bé Mannair used her special skill. One by one, her freckles darkened in colour and lifted off her skin. Each freckle grew delicate little legs that crawled all over her. Then in a sudden burst, Bé Mannair’s body erupted into a cluster of tiny black spiders that scuttled to the ground in different directions. The spiders spread across the Celtic lands and into hundreds of homes so Bé Mannair could spy everywhere at once. She spun webs and perched in dark corners until no secret was unknown to her.

She soon learned the Fianna headquarters was in the Irish harbour town of Howth. There, they held secret meetings on an offshore ship, away from prying ears.

Every tiny spider scuttled its way to the rocky cliffs of Howth Head. They clustered together, bringing Bé Mannair back to her goddess form. Without delay, she dove from a cliff and plunged into the cold waters of Dublin Bay. As the goddess swam deep into the ocean, her body grew bigger; thickening and turning blue. This time, her freckles rose into white barnacles as she transformed into a giant humpback whale.

Bé Mannair swam on until she arrived at the hull of the warrior ship, where she broke through the surface and sprayed great gushes of saltwater through her blowhole. The men on board didn’t pay her any attention, as they often saw whales in these waters. So the goddess swam around the ship, listening in on their conversation.

‘I can barely believe we found a secret entrance to the Otherworld!’ one warrior said.

‘And after so many years of searching,’ said another. ‘To think it was in a local cave, right under our noses.’

‘Well, our search is over, lads,’ said a third man. ‘We must be brave when we storm the Otherworld tonight. If anyone can fight the gods and steal their magical treasure, it’s us!’

Bé Mannair was shocked. The Fianna were to attack that very day!

As she watched the men leave the ship and take a boat back to shore, the goddess knew there wasn’t enough time to warn her army. She would have to fix this herself. But should she transform into a stampeding bull or a swarm of stinging bees? She guessed no ordinary animal could stop these fierce warriors.

Then again, Bé Mannair was no ordinary shapeshifter, and a bright idea came to her. She swam fast to reach the shore and, using all her power, Bé Mannair turned herself into a young mortal man!

As a boy, he ran to catch up with the warriors. ‘Men,’ he called out, ‘where will I find the legendary Fianna warriors? I have travelled a long way to join their ranks.’

‘We are the Fianna,’ they replied. ‘But we are not recruiting. Go home, boy!’

‘You can’t be the heroes I’ve heard about,’ Bé Mannair said, puffing out his boyish chest. ‘I’ve heard Fianna warriors are nine feet tall and stronger than Irish elk. Half of you are smaller than me, with stumpy legs and beer bellies. I could beat every one of you in a running race around Ireland!’

The men were surprised by this cheeky stranger but couldn’t resist accepting the challenge.

With that, Bé Mannair began to run so fast the wind rushed in his ears and the trees and mountains were nothing but a blur of colour. The men gave chase across every county. As they reached the beaches of Derry, Finn McCumhaill, a Fianna warrior twice his size, overtook the god. By now, Bé Mannair felt as though his muscles were on fire and his legs might seize up, but he wasn’t about to let his army down. So he pushed himself harder, and by the time they reached Donegal, he had left Finn in his dust.

In Mayo, Finn’s talented son, Oisín, barged into the god and almost ran him off a cliff. But Bé Mannair shoved Oisín away and sped ahead, racing on through Clare to Cork, and Wexford to Wicklow. In just three hours, Bé Mannair arrived back to Howth beach. He had beaten every one of the warriors by more than a mile!

By the time the men finally caught up, they knew this was no ordinary boy before them. They had come across gods before and realised Bé Mannair was from the Otherworld. So they knelt before him as if in worship.

The god told them they needn’t pretend to show respect.

‘I know your plan to steal from my people,’ he said. ‘And I warn you, your loss against me today is nothing compared with what will happen if you face my mother in battle!’

Beaten before their attack had even begun, the men sheepishly returned to their ship.

Back home, Bé Mannair returned to female form and reflected on her transformation. She enjoyed being a boy but being stuck in that body all the time wouldn’t make her any happier than being stuck as a girl. Instead, she was happy to know she had the freedom to be both, or neither at all. The gender-fluid goddess was finally comfortable in her many skins and happy to protect her people in her own special way.

Soon, the talented and quick-thinking Bé Mannair became the stuff of legend – as the shapeshifter spy who saved the Otherworld. 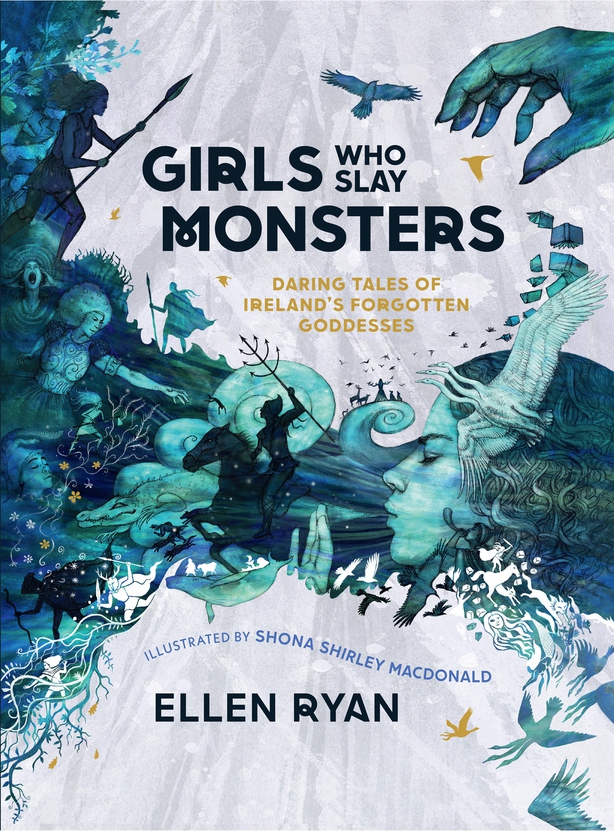 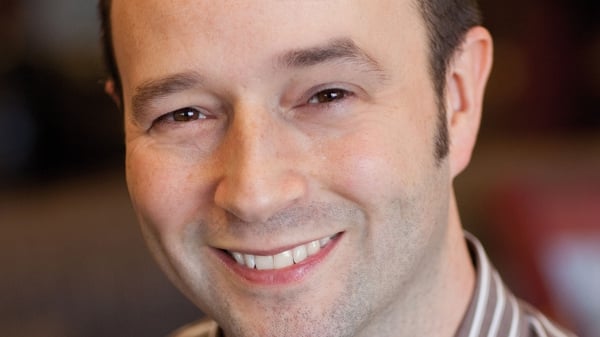 The Sackville Street Caper by Alan Nolan - read an extract