Derrinlough factory is so hidden that the only sign of its existence are the plumes of smoke that rise above the fortress of evergreens. Even some of the locals do not realise they live in proximity to the last surviving briquette factory operated by Bord na Móna. Its staff get to appreciate its honey-coloured brickwork, red and yellow floors, and blue and green painted machinery. This factory that extracted a material that kept the fires going in the hearths of our homes for generations plays an important part in the hearts of the local community. 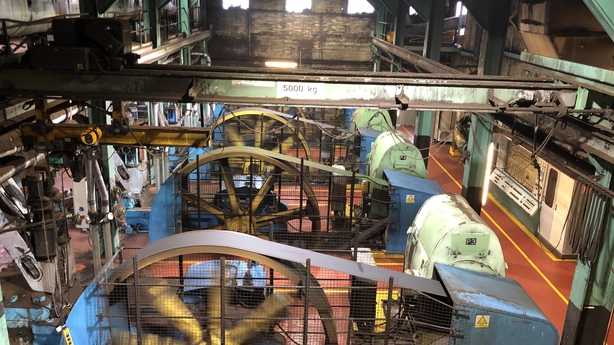 The idea of a second briquette factory in Ireland was raised in the 1950s to supplement Lullymore in County Kildare, built in 1935 and modified extensively in 1957-8, producing at the time over 50,000 tons of briquettes a year. With the ever-increasing demand for the product, rationing was introduced. With this in mind, Bord na Móna decided to build more factories in the midlands. 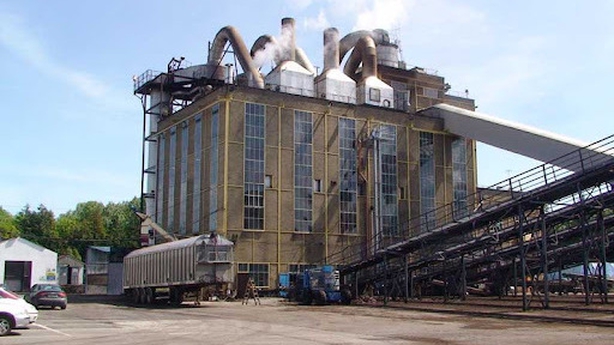 The Derrinlough Briquette Factory complex is situated on the Cloghan to Birr Road in Offaly. Derrinlough sits more or less centrally between Birr, Banagher, Cloghan, Ferbane and Kilcormac, with the majority of its employees coming from this catchment area. It is now the last surviving briquette factory of four operated by Bord na Móna, the others being Lullymore in County Kildare, Croghan in County Offaly and Littleton in County Tipperary. It is also the last of the large peat-dependent plants in the Midlands built between 1945 and 1965. Others included, along with the above briquette factories, the ESB power-generating plants at Allenwood, Lanesboro, Portarlington, Rhode, Ferbane and Shannonbridge. 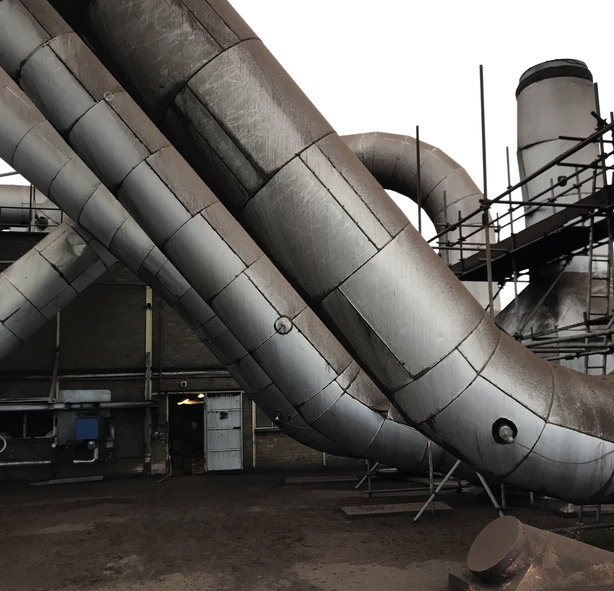 Work began on the construction of Derrinlough in 1957 and was completed in 1959. The factory, which cost £1.25 million to complete, produced its first briquettes in December 1959. Many of the people who worked on its construction would later find employment with Bord na Móna in the factory. The official opening of Derrinlough did not take place until October 1960. The honour was performed by the then Minister for Transport and Power under the Fianna Fáil-led government and future President of Ireland, Erskine Childers TD. The factory stands on approximately thirty-three acres adjacent to Boora Bog, where much of the raw material for its 135,000 tons/ annum of briquettes is sourced. 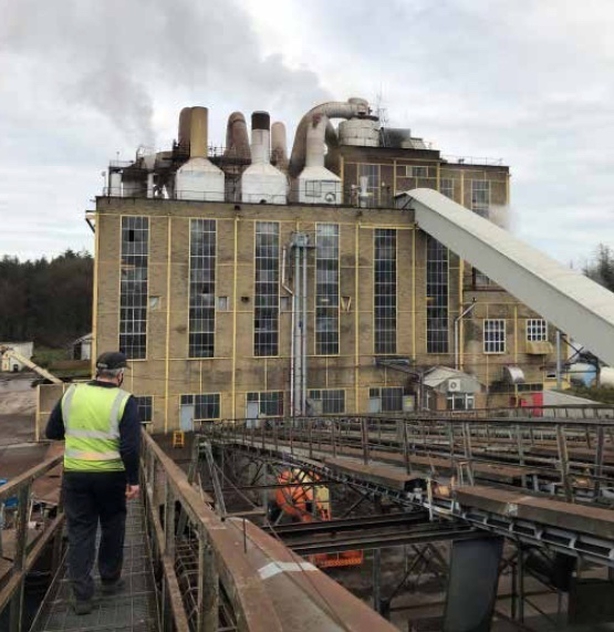 The Maschinenfabrik Buckau R. Wolf AG (Buckau Wolf, in short), then in West Germany, designed the factory in conjunction with Bord na Móna engineers. AEG were the electrical contractors, while Thompsons of Carlow erected the steelwork. It was originally meant to be one factory but split into two smaller factories built to identical designs; Derrinlough and its sister plant Croghan in east Offaly located between Daingean and Edenberry and completed in 1961. Croghan Briquette factory closed in 2018 in line with the termination of peat harvesting in Ireland and was demolished in 2021. 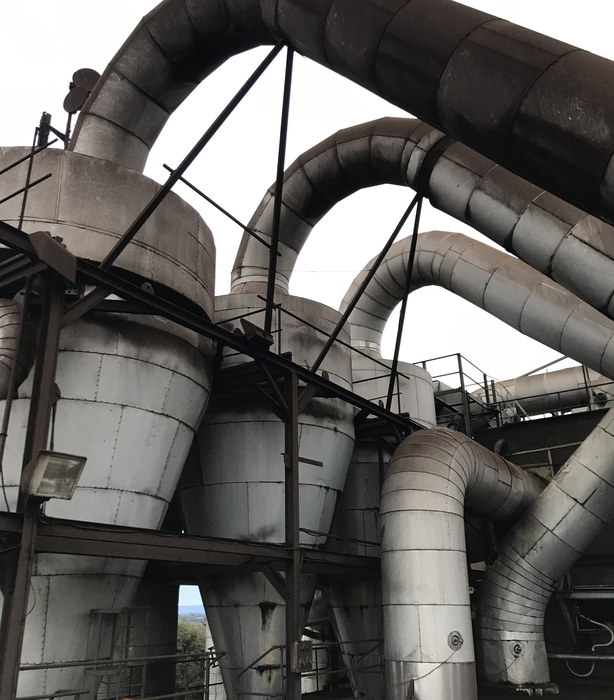 The factory is modernist in style as seen in the flat roof and longitudinal lines of the structure emphasises by the glazing and strong vertical detailing in bold yellow. Its industrial function is evident with its full-height steel pipes and covered conveyor belt from the factory to the storage shed. The factory is main predominantly in brink and is six storeys in height, with the second floor an open gallery overlooking the huge press wheels on the ground floor. On site, there is also a detached seven-bay two-storey office building, again with a flat roof. Together with the unusual gate piers at the entrance, the former briquette factory represents one of Offaly's finest examples of modern architecture. 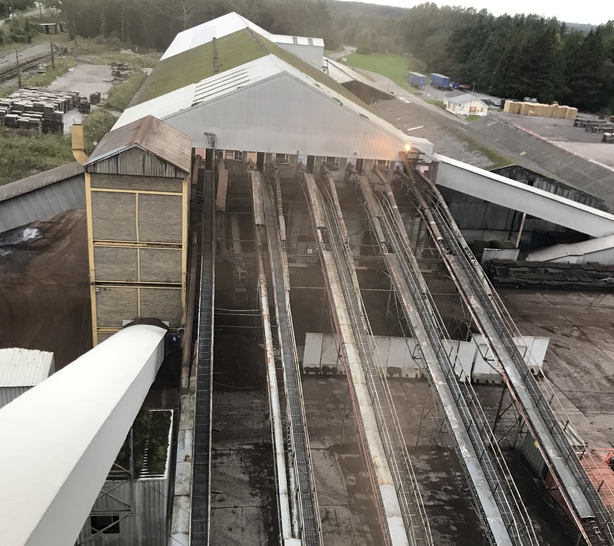 The peat is drawn in by locomotive and wagons from the bogs. It is blended in order to achieve suitable moisture and density for the production process. The peat is then fed by conveyors into the factory, where it is screened, with a small percentage fed to the boiler in order to generate steam. The steam is used in the drying process, and it also drives the turbine. The turbine allows the factory to be self-sufficient as it generates ample power to drive all electrical requirements on the site. Following the screening process the peat passes through the driers, where the moisture levels are further reduced to prepare it for pressing. As it passes through the presses the peat is compressed, and the briquettes take on the familiar shape that we all recognise. From the presshouse the briquettes travel to the baling station, where they are strapped into bales. The bales are then fed by conveyor belt to the palletiser to be palleted and put into storage, ready for sale. 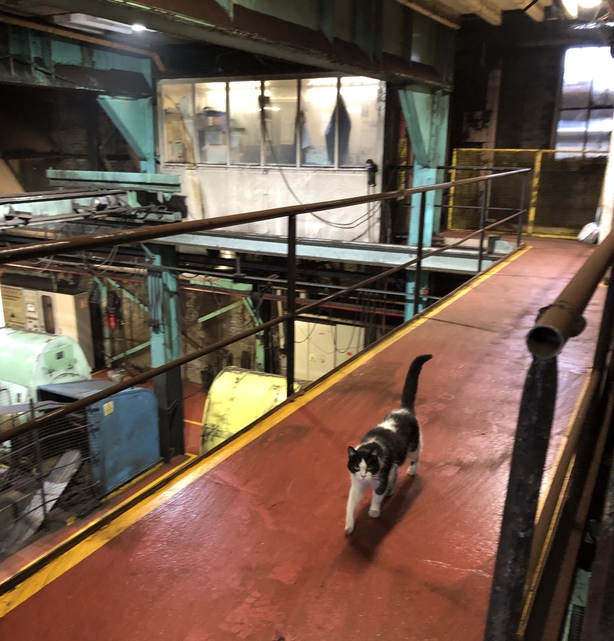 The principle of the production process has changed little, but the factory itself has always kept abreast of the latest technology. It now runs on programmable supervisory control and data acquisition systems.

Derrinlough briquette factory is due to remain in production until 2024. But what will happen to the site after the factory is decommissioned? It is not on Offaly's Record of Protected Structures, so it could meet the same fate as the other briquette factories. Derrinlough tells the story of the change in Ireland’s fuel sources and its ambitions for self-sufficiency and as it nears the end of its life, we might wonder how the factory will be repurposed for a new use like an industrial heritage museum, for instance, to introduce visitors to the importance of peatlands, our industrial heritage and climate change. One such example is the German Mining Museum in Bochum, on the site of a former coal mine, giving visitors insights into material extraction not just of coal but salt, gold, silver, copper, lithium and molybdenum, while also participating in re-grassing and biodiversity initiatives. It could bring new and sustainable economic activity to the Derrinlough area while revealing this building, and its history, to the public.

Thank you to Jamie Rohu, Shift Foreman Jimmy Shortt, Heritage Officer for County Offaly Amanda Pedlow and Emily O’Brien for use of her images. 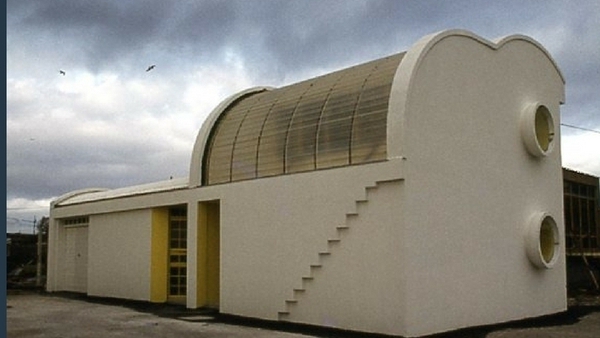