We present an extract from There's Been a Little Incident, the debut novel by Alice Ryan - read our review here.

Molly Black has disappeared. She's been a bit flighty since her parents died (sure, hadn't she run off with a tree surgeon that time?) but this time, or so says her hastily written leaving note, she's gone for good.

That's why the whole Black clan – from Granny perched on the printer all the way through to Killian on Zoom from Sydney – is huddled together in the back room of Uncle John's semi-D in the Dublin suburbs, arguing over what to do. Cousin Bobby's having a hard enough time of it as it is, convincing his family he's happy single and childless. Lady V reckons this is all much too much fuss over a thirty year old. And Uncle Danny knows all too well how it feels to be lost with no one trying to find you. But Uncle John is determined never to lose anyone again. Especially not his niece, who is more like her mum than she realises.

B stubbed a half-smoked cigarette out on the bench. He hated the taste. He hated the fuzzy feeling it left on his teeth. He hated how sick it made him the next day. He only liked the feeling it gave him when that guy in his year offered it to him, giving him a friendly nod of recognition that he’d never give him at school.

Molly’s badly plucked eyebrows rose in surprise. B didn’t think this was news, but a nervous smile appeared between her overly applied cherry lip gloss. He must not laugh at her. If it was hard for him to fit in, he knew it must be ten times harder for a girl. But she looked utterly ridiculous. In the glaring lights of the rugby pitch, her fake-tanned arms glowed jaundice. She was wearing a tank top with the word SASSY spelt out in faux diamonds. Pink glitter was scrawled across her cheeks. The glitter had started out at her temples but had formed two long paw prints down her face from when she was screaming the words to t.A.T.u.’s ‘All the Things She Said’ on the dancefloor earlier.

‘Should we go home?’

Her face was scrunched up in concern like she had done something wrong. Like she was the one out of place, not the girls who at fourteen had gotten spray tans and blow-drys for the rugby club disco. Behind them, the music ramped up, blaring out of the emergency exit. A group of blue shirts and chinos started singing along. Their voices hadn’t broken yet, so they squawked like provoked crows as they imitated 50 Cent, yelling across the yard about taking drugs and harassing women. B looked on morosely, but Molly was bent double. He wasn’t sure what to think until she swayed back again, and her laughing face was caught by the floodlights.

‘This is priceless. I’m going to liven things up.’

B panicked at the thought that she was going to accost the blue shirts and chinos, but she disappeared inside, slipping into the throng on the dancefloor.

Around him, the rugby stand was empty. Earlier, intertwined limbs had been dotted on alternating benches, but the cold had chased away couples once insulated by thimbles of vodka. B shivered himself now and pulled his forest green cord jacket tighter around him.

He knew he looked different, but he also knew that it wasn’t a bad thing. A few people had complimented him on the jacket and a guy on the St Michael’s Junior Cup team had crossed the dancefloor to ask him where he’d gotten his brown leather loafers (Arnotts). But still he felt outside it all. It wasn’t just the clothes. It was what they found funny. It was the music they liked. It was who they wanted to be around, who they wanted to be. Everybody seemed to want the same things. B didn’t want to be the exact same. But he didn’t want to be the only one who was different either.

Then he thought of Molly. Molly wasn’t the exact same. And when she tried to be, going on the bus into town to buy fake tan and squeezing her feet into heels that made her toes turn blue, she didn’t care that she got it wrong. Molly was the last thing a fourteen year old boy seemed to want. She wasn’t contained or sweet or compliant. Molly gave them piggy-backs through crowds at concerts. She challenged them to arm wrestles. She did an impression of Bill Clinton playing the saxophone while Hillary told him to shut up and bake cookies.

He knew that the boys in blue shirts would grow into the Mollys of this world. That one day they would wake up and see how funny and smart she was, but either way she didn’t seem to care. How did she feel so OK just by being herself? Where did that come from? But he knew the answer even before he’d started wondering. The best part of the night would be piling into the Toyota at half eleven to tell Molly’s mum Annabelle all the news. She always felt sorry for the chinos and fake tans. She became teary eyed at the thought of the normal lives they would go on to live. Molly and B, on the other hand, would light the world on fire. Annabelle saw B in a way that others, even others he knew loved him, couldn’t quite see. When he was with Molly and Annabelle, it was like he was already that person. He was already lighting the world on fire.

B looked out across the pitch. It was such a peaceful sight that from this vantage point it’d almost be enough to make you take up rugby. There was a pause in the music so his laugh at the prospect was louder than he expected. Into the brief silence, the first few notes of ‘Dancing Queen’ rang out. He knew immediately what Molly had done. Dread filled him even before he heard the DJ call his name.

B didn’t have to go inside. He could be proud of Molly for being eccentric without losing face himself. He sat still, holding his breath like a crime had been committed and he was about to be identified as a co-conspirator, until he realized the yard was empty. The blue shirts had disappeared into the sweaty mix, presumably looking for someone to rub up against.

On the short walk to the emergency exit, B imagined a clearing where only Molly stood manically trying to encourage people to dance to cringeworthy 1970s disco, but, as always, he had underestimated her. As he stood in the door he watched as girls in heels sprinted from the bathroom and from the hatch serving Club Orange. They made long human chains, handbags dangling on their elbows as they swarmed the dancefloor. The blue shirts and chinos were lined up against the walls, but they were tapping their feet too. The braver ones were even moving onto the floor and getting rewarded by fake-tanned arms looping around their crew cuts.

When Bobby walked onto the floor it was like a dam broke. It had just been announced that he would be the captain of the Junior Cup team next year. That made him a genuine celebrity. Jack Gleeson, the team’s star kicker, was right behind him. They weren’t just taller than the other blue shirts, they were bigger in every sense. Light brown hair flopped into Bobby’s blue eyes and Jack Gleeson’s smile was contagious. Things were easy for people like them. The world moulded around them, not the other way around. And this dancefloor was their empire. The dirty sweaty room elevated into euphoria and it was intoxicating. Jack was shy but everyone knew he could dance. All eyes were on him as he moved seamlessly, twirling Molly and digging Bobby in the ribs, slagging him for his tame shuffle. Molly had taken off her shoes. The floor could not be dirtier. It wasn’t just the cigarettes and spilt soft drinks. It was years of sweat and grit and broken bottles. B would have to talk to her about it. She could genuinely get sepsis. But with her shoes off, she was spinning. She was twirling and bouncing. She radiated happiness. He felt a wave of love for her so strong he momentarily worried that it would burst out of him in some visible way.

B didn’t move from the doorway. Molly knew that he couldn’t join her. She knew that he cared too much what others thought of him to throw his hands up in the air and dance like he did with her and Annabelle around their kitchen. But that was OK. Molly looked up and caught his eye. She had spoken to him in a private language. It wasn’t the language of fake tan and handbags or rugby and chinos. It was one that only they spoke. And it was better than any short-lived romance on the rugby stands. It was everything. 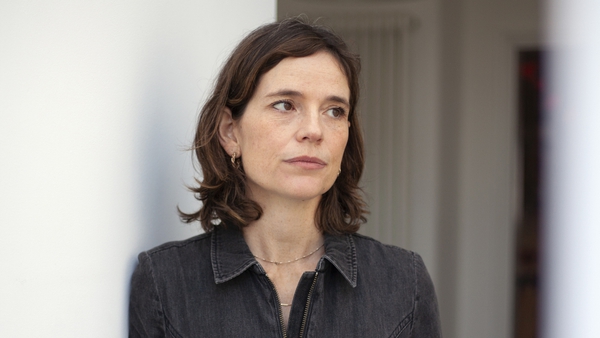 Hearts and Bones by Niamh Mulvey - read an extract