It was evident from my preview of episode one that the audio series Tiger Roll: The People's Horse caught my attention. The production captures the life of Irish thoroughbred Tiger Roll, the Cheltenham darling who made horse racing history in 2019 when he won the Grand National for the second year on the trot.

The story takes listeners from Tiger’s conception right up to the recent announcement of his retirement. It's a 12-year adventure that spans four homes, 45 races, and 1.8 million euros of winnings. Oh, and there might be a couple of international equine scandals and a global pandemic thrown in for good measure.

All seven episodes are available from anywhere you get podcasts (and it aired on RTÉ 2FM as part of the Game On programme all this week). There’s also an exclusive bonus interview with Tiger’s owner Michael O’Leary that delves into what lies ahead for Tiger Roll when his racing career concludes.

The first episode is about establishing expectations; it opens with the words of Jockey Davy Russell as he scoops up that second Grand National. However, instead of skipping straight to the good bit, it pulls back and brings us back to the beginning.

We fly through the sales ring into the training yard of Godolphin, one of the largest racing operations in the world. We briefly land in the home of the Hawke's until Tiger is sold to current owner Ryanair CEO Michael O’Leary. That only takes us to episode three. There are still four episodes of Cheltenham wins, Grand Nationals, and year-long stretches without a win in sight.

It feels like audio whiplash at times, one second he’s a champion, the next he is out of action for nearly 18 months. But that’s the beauty of Tiger and the series, they keep you guessing. Each episode follows a simple formula that usually consists of a major life challenge for Tiger followed by a cliffhanger ending.

The success of the previous Documentary On One series like The Nobody Zone and GunPlot makes the quality of this production no surprise. However, the level of detail that went into this biopic is astounding. It took over two years, 50 interviews, and 60 hours of footage to create. Phew, and I thought this article took a lot of work.

The narrative magnificently straddles storytelling, equine education, and reality checks. It delves into the relationship between homosapiens and these 56 million-year-old animals without overlooking the dangers and ethical grey spots of the sport.

My major concern was that the series would alienate listeners who know little to nothing about racing.

But to its credit, Tiger Roll: The People’s Horse effortlessly unpacks technical jargon in an accessible, yet enjoyable fashion. For instance, jockey Peter Gunn takes us through the process of breaking a horse, using Tiger as an example. By the time he concludes, you’d almost be tempted to try it at home. Side note: please do not do that.

For every intricate detail about the equine world, the series gives listeners a dash of whimsy. For example, the history behind Tiger’s name. He went from being named Harry at birth, to lot 975 in the sale catalogue, only to be dubbed Sausage Roll and later Sausage by the riders at Godolphin. Until finally (thank God) Godolphin office manager Jan Gardner settled on the inspired choice of Tiger Roll.

That being said, there were moments when the cynic in me came out to play. Nearly every person, including those who sent Tiger packing, said they always knew he would be a champion. When Godolphin sold Tiger he was "slow to come to hand". Yet, despite this, former trainer Mahmood Al Zarooni said he felt "he would be a very good horse". Hindsight is quite something, isn’t it?

Listen: Tiger Roll: The People's Horse, Episode 2: Up and Over

It is hard to emphasise enough how powerful the musical arrangement is to this production. Each episode works hard to make the listener feel a part of the action. The decision to allow jockeys like Davy Russell and Lisa O'Neill to narrate their big wins, alongside snippets of old news footage is an inspired choice. This cacophony of sounds that includes the screams of spectators helps to build tension. And while not comparable to the real thing it comes in at a pretty close second. When Russell describes Tiger pausing at the last stretch of his first Grand National you may find yourself screaming in protest.

Three deaths rock the production, proving that no amount of classical music or barnyard anecdotes can offset the darker truths of horse racing and everyday life.

Mick Buckley, the man who arranged the foal share that led to Tiger Roll, dies in episode one. Later we learn of the death of JT (John Thomas) McNamara, a young man paralysed after a fall at the 2013 Cheltenham festival. Tiger wins not one but two races named in his honour. In the sixth episode, Davy Russell dedicates his Grand National win to rider Pat Smullen. By the series finale, Smullen has died of pancreatic cancer.

Yes, this production is stacked with notable names from the ruler of Dubai to the ruler of the Irish sky, but they pale in comparison to the side characters we meet, from the grooms and the auctioneers to the numerous jockeys. If it takes a village to raise a child, it takes a metropolis to raise a champion.

Producer Liam O'Brien reminds us that "Fate and destiny are words that are thrown around a lot in sport, but in the story of Tiger Roll they matter". It’s a story of Hollywood-level coincidences. Throughout each episode, there are little breadcrumbs leading us towards Tiger’s big finish at Aintree. Tommy Stack, the trainer of SwissRoll, won the Grand National in the ’70s. And his former owner Nigel Hawke clinched the same victory in 1991. There’s also Tiger’s penchant for winning races on his birthday, March 14th.

After listening to the series it’s difficult to imagine Tiger’s life without the influence of jockey Keith Donoghue. He rode Tiger in his first cross country race and helped prepare him for nearly every Cheltenham festival and Aintree win since.

While Tiger is often considered to be too small for the industry, the 6ft tall Donoghue has the opposite problem. Before the pair joined forces Donoghue had almost quit racing due to weight issues, and Tiger was on the verge of being sold.

Sadly, Donoghue was ruled out of racing Tiger in his first Grand National, because he couldn’t meet the weight requirements. This issue leaves a sour aftertaste, a reminder of some of the more toxic aspects attached to this sport. Donoghue has since left Tiger’s trainer Gordon Elliott’s yard.

For those who seek more of the nitty-gritty behind-the-scenes information, this series is full of it.

From feeding routines and race day prep to titbits from Elliott's yard, it won’t disappoint the racing aficionados out there.

Each episode has a running time of between 29-40 minutes, with the final instalment being the longest. At first, I questioned this decision, how much more is there to tell? In the first half of the episode, Tiger secures his second Grand National win. But there’s a lot more to come, like Brexit, a pandemic, major surgery, and an international scandal just for good measure. As I said, expect the unexpected.

Now, about that scandal. In 2021 a photo surfaced of Elliott sitting on a dead horse. The image led to a 12 month ban from racing with six months suspended. Thankfully the producers bypass sensationalism, while still relaying all the facts. They ask the hard questions but maintain that this is the story of Tiger Roll, not Gordon Elliott.

To give credit, Elliott does agree to another interview post-ban but, in the spirit of keeping things Tiger-focused, you’ll need to listen to find out what he said.

After two years of global hardship, this hopeful tale of the ultimate underdog is a welcome reprieve. Sometimes, you really do just need a true story with a happy ending.

Listen to more from Tiger Roll: The People's Horse here. 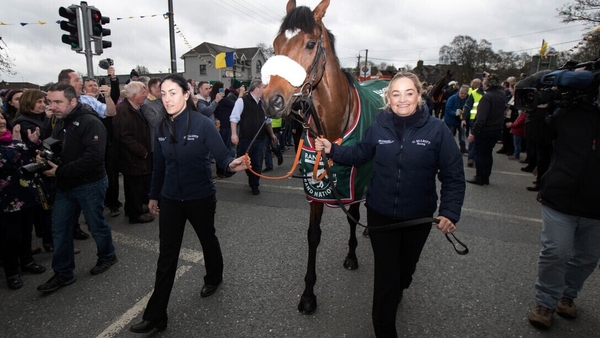