The Eason Novel of the Year Award was won by Sally Rooney for Beautiful World, Where Are You, while the RTÉ Audience Choice Award went to Maureen Gaffney's Your One Wild And Precious Life.

First awarded in 2006, the An Post Irish Book Awards are Ireland's biggest literary celebration, showcasing a diverse mix of exceptional writing from new and established writers across 20 categories - championing everything from novels and non-fiction to poetry, short stories and the Irish language.

In one of a number of new categories announced this year, Kenny's Bookshop and Art Gallery in Galway claimed the An Post Bookshop of the Year award prize, while Marian Keyes was named Library Association of Ireland Author of the Year.

The 2021 Sunday Independent Newcomer of the Year prize went to Snowflake author Louise Nealon, while another debut author Séamas O'Reilly, received the Odgers Berndtson Non-Fiction Book of the Year for his memoir Did Ye Hear Mammy Died?

This year, Sebastian Barry joins a host of other distinguished recipients of the Bob Hughes Lifetime Achievement Award, amongst them the likes of John McGahern, Seamus Heaney, and Edna O'Brien.

"For forty years I have been the grateful citizen of a properly mysterious village called the Irish book trade," Barry said in his acceptance speech. "You are all wonderful, dedicated, unusual people. I salute your alchemy and your startling powers."

"An award like this makes a writer feel that their efforts over the many years have been worth the candle.. those boxes, and boxes of candles burnt at both ends. That's a joyous feeling. The best feeling!"

This year’s Awards attracted a record number of votes from the Irish public, with audiences around the world were able to watch the An Post Irish Book Awards ceremony live via RTÉ Culture.

Voting opens tomorrow (November 24th) for the overall An Post Irish Book of the Year, which will be announced on RTE television on December 8th.

An Post Irish Book Awards 2021 - the winners in full

Eason Novel of the Year

· Beautiful World, Where Are You – Sally Rooney

Eason Sport book of the Year in Association with Ireland AM

· Fight Or Flight: My Life, My Choices – Keith Earls, with Tommy Conlon

· We Don't Know Ourselves: A Personal History of Ireland Since 1958 – Fintan O’Toole

Dubray Biography of the Year

Bookselling Ireland Cookbook of the Year

· Aisling and the City – Emer McLysaght and Sarah Breen

Bookstation Lifestyle Book of the Year

· A Hug for You – David King, illustrated by Rhiannon Archard

· The Summer I Robbed a Bank – David O’Doherty, illustrated by Chris Judge

Teen and Young Adult Book of the Year

· Your One Wild And Precious Life - Maureen Gaffney

Library Association of Ireland Author of the Year

Writing.ie Short Story of the Year

The Love Leabhar Gaeilge Irish Language Book of the Year 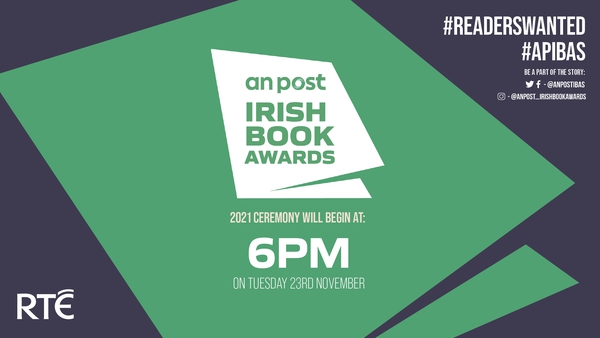