Rónán: Sometimes in a collaboration there is a magical synchronicity, a telepathy. All the Ducks gather in a row and all the lights stay green. That's how it felt to record this album with my friend Myles . A chance evening in December, a chance recording of a fresh song and the feeling of warmth in the collaboration.

It started when my partner Sarah Glennane (Screen Composers Guild) heard our song Tá'n tÁdh Liom. She urged and helped us release it. It became a viral hit within weeks and then we decided to pursue this partnership and set about recording the album.

After a year of lockdowns, and a lot of time to write songs about feelings brought to the surface due to having so much time on my hands, this album project felt incredibly worthy and liberating to create. With each idea I had, Myles had another. With each song I sang, he could find a pertinent sound to compliment the sentiment.

Brian Mac Gloinn ( Ye Vagabonds ) offered his home studio for us to do some early preparation when we needed somewhere to record. The two of us took some time to work out what worked best for which song . Another blessing then came through from Conor and Stephen Mallaghan when they offered us a few weeks to record in their family owned Shell Cottage in Maynooth. We loaded a car with instruments. Electric and acoustic instruments, mics, cables, speakers. preamps, everything a recording studio needs, and we immersed ourselves in music, tackling a new song each day, one by one until they were done. Our working relationship grew as we trusted each other to make the right call.

In the middle of recording some songs, we changed the key and started again. Sliabh Gan Anam was in D and Myles suggested a more comfortable key to sing in, which became B. I had originally written every song on the guitar, but to let new instrumentation on the songs breathe we ended up dropping whole guitar parts. Cad A Tugfadh Dom is one such song, where surprisingly a wooden hang drum became the lead instrument. We played subtle polyrhythms to lift songs, like in Ar Ár Son which was more of a classical guitar piece. We quickly dropped a song if we felt it wasn't working, like if the tempo felt wrong, and immediately started recording the song from scratch again until we were satisfied. Nothing was sacred unless it proved itself to be. The process was fast. We were able to capture and retain a mood that runs through every song, because we always kept the recording process quick and exciting, It's a lovely thing to do, to not be precious and not to linger on anything that wasn't feeling right.

We immersed ourselves in music, tackling a new song each day, one by one until they were done.

In just 9 days we recorded the 9 songs on the album. Myles then had time to mix the album in the same space, during which time Rhob Cunningham gifted some songs with vocal harmonies. In the past year Myles had released three ambient albums under the moniker (Indistinct Chatter), with a great team of people. He recommended Seán McErlane (This Is How We Fly) to master this album. The inimitable Louise Barker to help with PR. In just 4 weeks the album was recorded, mixed, mastered and a plan was in motion for it's release. It's great to work with people who really excel in their work. It always makes your own work better. So far so good for Tá Go Maith. I feel enormous gratitude.

Myles: I've always been surrounded by music. Totally immersed and distracted by music. It literally ruined my chances of completing a leaving cert. My mother didn't mind. She promoted the idea that I do whatever made me happy. Luckily I was offered a place in art college but I dropped out after 3 months because I joined a band. Finally I knew what made me most happy when I hit 21. To be able to record my own music. Then followed perhaps the only education I ever took seriously, a degree course in studio sound engineering in Temple Bar Music Centre. I only ever used the expertise I gained in that field to record my own band Blotooth, then Juno Falls. After a massively disappointing liaison with a major label in 2008, I stopped playing all together, and began filming my musician friends and uploading them to YouTube, beginning with Rónán, then Lisa Hannigan. This soon became a full time career. I was still being fed by music, literally... but despite having so much of it in my life, my ability to engineer, produce and even write music was put on hold. So when lockdown occurred, and the live music sector crashed, it didn't take me long to revert back to younger me. I dusted off all the old studio equipment in my attic, which hadn't been plugged in for a decade, and started recording again.

I've always been surrounded by music. Totally immersed and distracted by music. It literally ruined my chances of completing a leaving cert.

When Rónán called to my house one evening during lighter Covid restrictions in December of last year, he may as well have walked into a recording studio. I made him a cup of tea, and he left with a fully recorded (and filmed) version of his song Tá'n t'Ádh Liom. I can't thank him enough for trusting me to play electronic ambient electronic textures all over it. The reactions from audiences online were so encouraging that we knew we had to record more. I've always been a huge fan of the mobile recording studio set-up, ever since learning of record producer Daniel Lanois, and how he would transport his studio equipment to different beautiful spaces, most notably for the U2 albums he produced. His ethos is simple. If a room is comfortable and sounds beautiful, he can create a bubble, and hold a mood within that room, capturing the mood throughout an album. I finally had an opportunity to exercise a lifelong ambition to produce an album for someone in the same way.

On our first day in Shell Cottage we immediately captured a mood that we knew would work for every song. Because Rónán is such a Jedi at performing live, we were able to jam the whole time, keep the mood alive, keep driving and pushing the songs in the right direction, informed largely by the atmosphere we created, and Rónán's generous wealth of patience, trust, confidence and expertise. There was a huge inglenook. The fire kept burning the whole time. A large stag head presided over us. There was an ancient timelessness about the space that fired our imaginations, inspired and encouraged us. We went in with one song, and left with an album. I perhaps left with a new job description of Record Producer, and I hope to do a lot more of it. 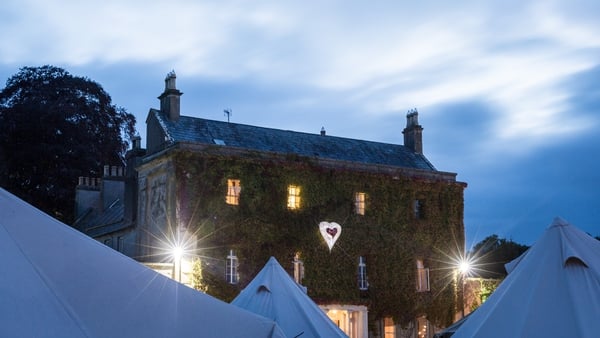 Stranger things: Emmet Condon on the return of Another Love Story