Saving the State - Fine Gael from Collins to Varadkar charts the chequered history of the party from its origins in the 1920s to the end of civil war politics as Fine Gael formed a coalition with Fianna Fáil and the Green Party.

Over recent decades, Fine Gael leaders have shown a marked inclination to position themselves as the political descendents of Michael Collins. However, the truth is rather more nuanced.

The party's first president was Eoin O’Duffy, who also led the 'para-fascist' Blueshirts, which reflected movements spearheaded by Mussolini and Franco in the 1930s. He encouraged calls of "Hoch O’Duffy" in deliberate imitation of the German "Heil Hitler" greeting.

As O’Duffy’s extremism grew, he was removed from the Fine Gael leadership by more moderate figures. Unsurprisingly, when the party marked its 75th anniversary in 2008, then leader Enda Kenny declared he felt "privileged to follow the noble tradition set down by Collins, Griffith and Cosgrave."

Claiming continuity with Collins was "a convenient way for Fine Gael to sidestep any need to confront the reality that Eoin O’Duffy – the man indelibly linked with the Blueshirts – was the party’s first president," declare journalist Stephen Collins and academic Ciara Meehan in their sweeping history of the party.

Saving the State gives the unvarnished truth about the party’s murky beginnings and mixed political fortunes. It is an accessible and engaging account of one hundred years of politics told through the Fine Gael prism.

The book succeeds in condensing complicated episodes without glossing over key facts and affords readers insights without overwhelming them with unnecessary details.

It charts the party’s transformation from the most conservative political group in the Oireachtas to being the senior coalition partner in governments which introduced divorce in 1995, marriage equality in 2015 and abortion reform in 2018.

It tells the story of the party’s formation from the merger of Cumann na nGaedheal, the National Centre Party and the Blueshirts in 1933. Morally dubious actions by its founders are outlined, notably when the Provisional Government "stepped outside the rule of law in 1922 when it authorised the execution of four republican prisoners as a message to those who refused to accept the legitimacy of the Free State." Despite those origins, Fine Gael moved to become the party of law and order.

Under John A Costello as Taoiseach, the Fine Gael government withdrew Ireland from the Commonwealth and made it a Republic in 1949. The party spent most of its life in opposition. By 1969 it had lost four elections in a row. During those times of repeated electoral failures, it turned on its leaders as it struggled to find a clear identity.

At one low point in 1992, its press officer Peter White told TDs and senators that "outside of the early 1980s Fine Gael has pursued a policy of trying to offend nobody. The screamingly obvious fact is that there is not and never was, and never will be, a market for the broadly sensible but invisible party. Our policies are grand, but it is on issues where blood, mud and swords swirl that character is defined."

In 2002, when Enda Kenny took over, he became its third leader in sixteen months. "Fine Gael had been in power for a paltry two-and-a-half years out of the previous fifteen, and that short interval had happened by a fluke," the authors note. 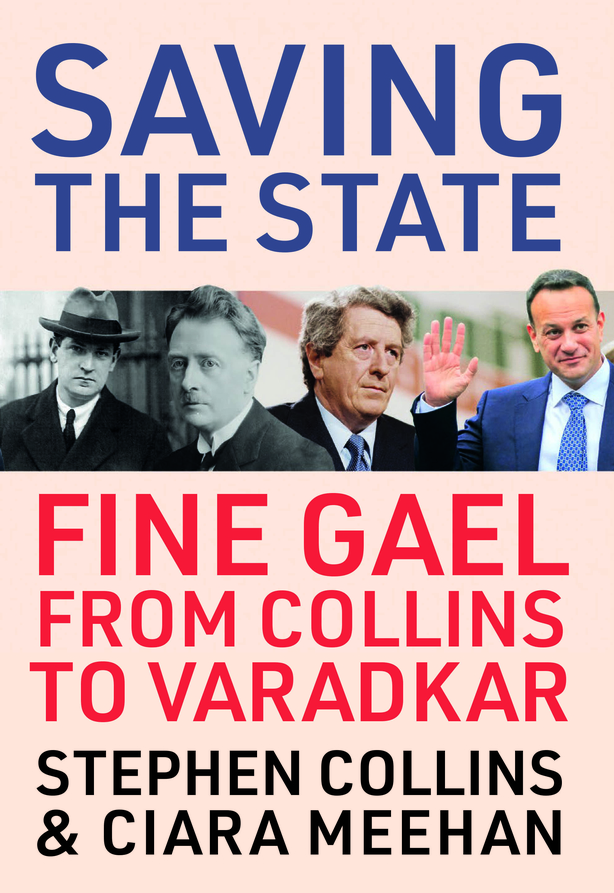 The book’s format is to tell the Fine Gael story through each of the party’s leaders, which provides insights into how they grappled with shifting political sands. WT Cosgrave was a "first among equals rather than a charismatic leader" who did a hasty deal with his British counterparts to suppress the Boundary Commission report in 1925, which recommended a redrawing of the Border. The settlement included debt forgiveness by Britain.

The running battles between Garret FitzGerald and Charlie Haughey dominate the chaotic political environment of the 1980s as the State grappled with abortion, the Troubles and terrible economic conditions.

"What was truly galling for Fine Gael was that Haughey and Fianna Fáil showed not the slightest shame in perpetrating a fraudulent budget on the Irish people," write the authors.

Alan Dukes facilitated a climate where then Fianna Fáil Finance Minister Ray MacSharry could rectify mistakes of the past. However, within Fine Gael, Dukes’s leadership was "marked by a period of instability and infighting."

John Bruton, despite bringing Fine Gael into government as part of the Rainbow coalition, grappled with three internal no-confidence motions and was followed by Michael Noonan who "never had a chance to find his feet."

Enda Kenny’s steady rebuilding of the party marked a turning point. Then came the 2008 economic crash which upended the political system. The 2011 election saw Fine Gael become the largest party in the Dáil as he led the country out of the mire of the EU-IMF bailout.

He was the first of the party’s leaders to retain power after an election following a period in government  – but he also lost 26 seats, sowing the seeds of discontent with his leadership.

The authors argue that choosing an openly gay man and the son of an Indian immigrant to lead the party, when Leo Varadkar replaced Kenny, "showed how far Fine Gael and the country had come." However, Varadkar conceded he lost the 2020 general election.

That disappointing electoral result brought an end to civil war politics as Fine Gael formed a coalition with Fianna Fáil and the Green Party. Such an agreement would have been "unthinkable" to the party’s forebears.