Damien Dempsey, Aoife Nessa Frances, alt country musician CMAT, and Mark Lanegan are among the artists taking part in a virtual Other Voices over the next six nights in Dingle and you can watch all the shows live on RTÉ Culture at 7.00pm each evening. 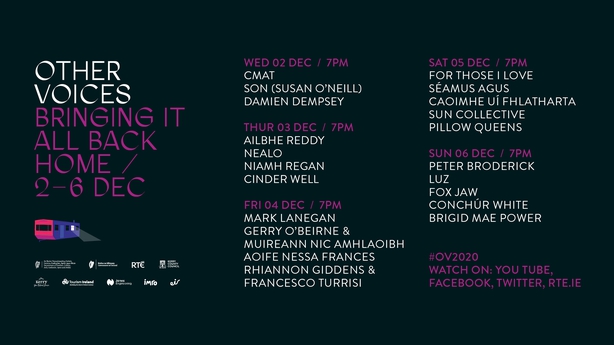 While all the Other Voices live streams will be publicly available for free, limited supporter tickets to support the organisation during the unprecedented crisis within the arts industry are available.

Other Voices say that by buying one of their tiered digital supporter tickets, viewers will be supporting artists and crew, who are facing immeasurable difficulty, with plenty of perks and prizes thrown in for good measure. You can purchase tickets here.

Other Voices founder Philip King said: 'We are absolutely delighted that Other Voices will be going ahead in Dingle again this year, streamed live, from the West of Ireland to the world.

"Thankfully, with the support of Minister Catherine Martin and her Department, our artists and crew are able to be in Dingle to produce an extended Other Voices festival - Bringing It All Back Home - that will be streamed live over five nights.

"We will collapse distance between the Church of St James here in Dingle, in the Gaeltacht of West Kerry and homes all around the island of Ireland and across the whole wide world. It will be an experience like no other, in a year like no other. You are invited to take the best seat in the house."

Executive Producer at RTÉ Justin Healy said: "This year more than ever supporting Irish artists couldn’t be more important to us, and in Other Voices we have a unique opportunity to bring their work and the magic of Dingle to a worldwide audience.

"We are delighted to continue to support Other Voices and look forward to bringing this year’s special series to our audience on multiple platforms. "