Almost sixty years on from his first appearance with the Raidio Éireann Symphony Orchestra, Proinnsías Ó Duinn returns this Friday to conduct RTÉ National Symphony Orchestra LIVE in works including that from his debut with the orchestra in 1962, Schubert's Symphony No. 5. He talks to Michael Quinn about 'been fortunate and lucky’, being used to having no audience and about being optimistic that audiences will come back.

When Proinnsías Ó Duinn steps onto the National Concert Hall’s podium this Friday, it will bring the Dublin-born conductor and composer one step closer to marking the 60th anniversary of his first appearance with the RTÉ National Symphony Orchestra.

Fittingly, the finale of his wide-ranging programme will be Schubert’s youthful Fifth Symphony, the work with which Ó Duinn recalls he made his debut with the Raidio Éireann Symphony Orchestra (as it was then known) in June 1962.

"I've had a great time but I’ve been fortunate and lucky. If you don’t have loads of money and political connections, you better have good luck. I’ve known lots of people who are very talented but haven’t had the luck or been in the right place at the right time."

In the intervening years, Ó Duinn’s career has flourished, seeing him fronting orchestras in Iceland and Ecuador before returning to Ireland to lead the RTÉ Singers and subsequently, from 1978 to 2003, the RTÉ Concert Orchestra, where he remains its conductor laureate (Ireland’s first-ever such appointment). This year, he began his fifth decade as music director of Dublin’shighly respected Our Lady’s Choral Society.

Running parallel to all of that has been a composing career – "Composing is a bit like having the flu, you have to get it off your chest" – including his acclaimed score for the 1980 television adaptation of James Plunkett’s Strumpet City. It has been, he says, a good life.

"I’ve had a great time but I’ve been fortunate and lucky. If you don’t have loads of money and political connections, you better have good luck. I’ve known lots of people who are very talented but haven’t had the luck or been in the right place at the right time. I’m glad to say it worked out for me."

"Fauré and Schubert were both great songwriters and that shows in their music. They knew how to write a melody or two."

As a child, Ó Duinn’s interest in music was encouraged by his older, clarinet-playing brother, and quickened when a childhood illness confined him to bed for a protracted period, a situation he took gainful advantage of: "Instead of doing the things I should have been doing at that age, I had a piano beside the bed and studied scores."

More formal studies at the Royal Irish Academy of Music duly followed, before, aged 18, he had his first encounter with luck. As a cellist in the Gaiety Theatre’s orchestra, he was well-placed to step in for an indisposed conductor to make his podium debut for Donal Giltinan’s musical portrait of Percy French, The Golden Years, in 1959.

A lifetime later, as he prepares to conduct in Covid-confined circumstances, Ó Duinn is taking the prospect of performing to an empty hall in his stride.

"An audience can make a huge difference to a concert, you feel it as soon as you walk on stage. But a lot of my work has been recording in studios, so I’m used to having no audience. It’s not something that will unsettle me."

Which is not to say that he is unaware of the peculiar situation the orchestral players will find themselves in.

"It’s a challenge for everyone when musicians are separated. They’re trained to listen, to make connections with each other and to blend as they play. When they’re sitting apart from each other, it can make them feel like they ought to be giving solo performances."

Accentuating the positive, he says that a reduced orchestra size has unexpected benefits for viewers watching streamed concerts.

"It has the advantage that the director can get closer to individual musicians at key moments in the score. You can see more clearly what it is they’re doing. For young players at home especially it’s very helpful to get that focus, to be able to see what each musician is doing."

For Friday’s concert, Ó Duinn has put together a programme of contrasts that make a virtue out of the reduced orchestra currently permitted on stage.

"There’s a lot you can do with a classical-sized orchestra. So, we have Rossini’s L’italiana in Algeri Overture firing away to start, Fauré’s Pavane elegant and relaxed, and then extracts from Mendelssohn’s A Midsummer Night’s Dream with wonderful orchestrations that bring to life magical characters with all the skill of a painter. And it’s good fun. We need a bit of that now."

Completing the concert is Schubert’s Symphony No.5 with which Ó Duinn began his lifetime’s association with the RTÉ National Symphony Orchestra.

"Fauré and Schubert were both great songwriters and that shows in their music. They knew how to write a melody or two. There are some wonderful singing lines for woodwinds in the Schubert and it’s a piece that makes you feel and makes you smile – something he inherited from Haydn. Never negative, never pessimistic, even in sorrow."

An observation that prompts from the thoughtful Ó Duinn in these troubled times a reflection on what the future might hold.

This week with Proinnsías Ó Duinn conducting, music inspired by the ridiculous and the sublime, music by great song writers, music which is great fun and music which brings magical characters beautifully to life! @RTE_Culture @RTElyricfm @rte SEE https://t.co/MGR8Od1OzS pic.twitter.com/9XyP8rXqia

"I think for the time being we’ll see shorter concerts online with no audiences, but we have to be optimistic that audiences will come back. And they will. We have CDs and streaming and Zoom, but you just can’t beat live music with an audience there in the room with you."

RTÉ National Symphony Orchestra LIVE will be streamed across RTÉ Culture and broadcast on RTÉ lyric fm this Friday, October 30th from 7pm. 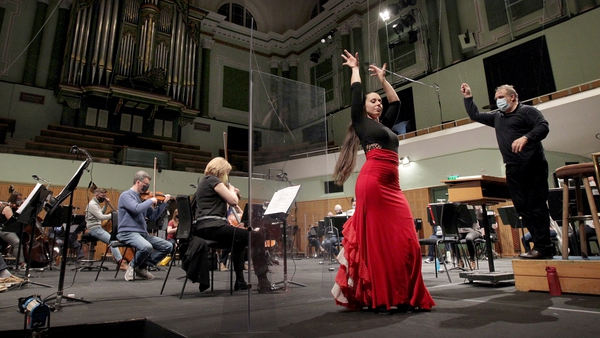