Cian Ó Cíobháin pays a personal tribute to British DJ and producer Andrew Weatherall, a frequent visitor to Ireland, who has passed away aged 56 after a pulmonary embolism.

I've just learned the unbearably sad news that one of my biggest influences and total heroes in my life, the mighty Andrew Weatherall has passed.

The DJ and producer Andrew Weatherall, has died aged 56. In this clip, he talks about his first meeting with Bobby Gillespie from Primal Scream and his work on Screamadelica. pic.twitter.com/mIBamTJ6Uf

Apart from his untouchable music legacy in the studio, he's left me with some of my favourite memories of clubbing and dancing. I recall how on a trip to Galway to play at the city’s legendary 091 party in the GPO, he almost blew the roof off (I mean, he almost seriously did!), when he dropped Alter Ego’s Rocker. One of the most raucous techno sets I ever heard.

Later, he became a regular at 110th Street, the club night I ran with Cyril Briscoe. He was a warm and hilarious man and never short of le mot juste. Once I was apologising to him for only being able to afford a grand for his services. He looked me in the eye and said 'Cian, a grand is not to be sniffed at’.

So sad to hear about Andrew Weatherall. I was only listening to his mix of 'World in Motion' in the gym this morning and thinking how amazing it was. I worked with him many times - he was a truly nice, kind man who shared many, many words of wisdom. RIP. X

The very first time he played at 110th Street in The Vic, he was so bowled over by the reception he got from the city’s clubbers. Before he played his last tune, we were crouched down behind the back of the decks and he said "Wow, that was unreal, when can we do this again?" "Wanna do the club’s birthday party this year?" "Yes please!"

Another time, we were sharing a cig outside a restaurant in Galway and I was fanboying him and I said "Do you mind if I pay you a compliment?" "Not at all.' ‘I think that you’re the master of tension-and-release on the dancefloor. I haven’t heard another DJ who does it quite as well as you" "Why thank you, young man, nobody has ever told me that before."

I couldn’t quite tell if he was joking or not.

Another night, I was warming up for him in Dolan’s in Limerick and he was nowhere to be seen. I was doing my best to ‘stay’ in warm-up mode as the crowd were getting impatient and keen to be let off the shackles, but he was conspicuous by his absence. I kept turning around, wondering when he’d appear and eventually spotted him lurking behind a curtain. "Hey Andrew, how long have you been there, wanna start?" "I’ve been here for ages, keep going, you’re doing a great job".

I remember reading an interview once where a young man from west Cork picked him up from the airport to drive him to his hotel, pre-gig and was excitedly asking him questions about his life as a DJ. Instead, Andrew turned the conversation around and asked him what he did for a living. The Corkman told him that he was a fisherman, who worked on boats to which Andrew retorted: "Nevermind what I do, it’s bullshit, it’s discos... tell me tales of the sea".

The last time I met Andrew was last weekend in Manchester. My friends and I rocked up to The White Hotel in Salford after Homoelectric and were overjoyed that we could still get in at 4 am. We caught the last two hours of his A Love From Outer Space set with Sean Johnston. The word ‘epic’ wouldn’t come close to doing justice to the second last tune they played that night and the rogue in Weatherall would’ve been delighted that one of our phones ID’d it as Avicci and another as some weird ambient tune that I hadn’t heard before! Of course it was neither, it was Andrew Weatherall, playing something absolutely f**king wonderful that probably only he knew (perhaps one of his new tunes: he was scheduled to release a single per month this year).

I finally got to briefly chat to him, stooped on a step on the side of the DJ box at 6am.‘What the hell are you doing here?" "It’s my birthday, we’re here in Manchester having the craic, we were at Homoelectric earlier, how are you?" "Truth be told, I’m feeling rather poorly, I almost didn’t make it tonight".Then someone else caught his attention and I bade him farewell. Just before I walked away into the stormy night he shouted: "Happy birthday!"

Andrew Weatherall, you have been one of the biggest influences on my life as a DJ and lover of music. I can’t believe that you’re gone. You were one in a billion, a true trailblazer who did what you always believed in and couldn’t give a f**k what anyone thought. But the thing is - so many of us gave a f**k. And everything you did, you did it with panache. And you did it with integrity. I’m crying, I miss you but I’ll do my best to keep your spirit alive in everything I do. 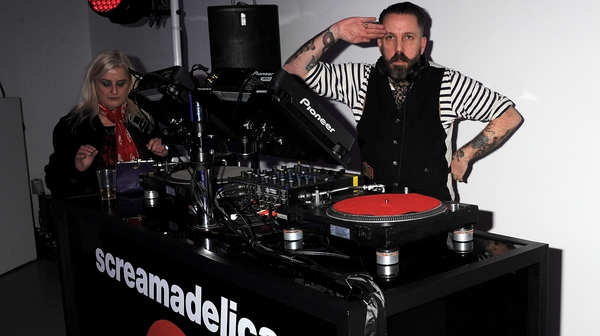