Theatre Lovett Co-Directors Muireann Ahern and Louis Lovett write for Culture about their production of Humperdinck's Hansel and Gretel for Irish National Opera, which premieres at the Abbey Theatre this month, ahead of a nationwide tour.

When Irish National Opera's artistic director, Fergus Sheil, invited us to direct Hansel and Gretel, our first opera, we said: "Yes! Of course!" Thank you very much! We’ll do it! Goodbye!" Then we put the proverbial phone down and had a cry. Because we were frightened… an opera!?

We supposed he had asked us because of our track record making theatre for audiences, young and old. Also, music is integral to our work, usually original and often performed live. We also had experience working with orchestras. So far, so okay. But a full-length opera?

We have now emerged from the other side of the planning, pre-production and rehearsal process. If we are no longer complete scaredy pants, it is only because of the wonderful team that Irish National Opera, assembled around us, plus the outstanding support of the Abbey staff.

There is only one thing scarier than a witch: an unpredictable witch.

Without doubt top of that list is our conductor Richard Peirson. Richard’s talent, his operatic experience, his generosity of spirit, his stamina, his willingness to play and his all-round goodness made this a very happy experience. Then of course our superb singers. We watched and listened to them every day and we are richer for it. Our musicians who joined in on our play. Our talented design team. Our two young actors Amelie Metcalfe and Ronan Millar and, of course, Mr Raymond Keane, our hotel porter who helped glue this entire production together. Hats off to all.

This opera originated as a little play written for her family by the composer's sister Frau Adelheid Wette. The original performers were her daughters. Their uncle, Professor Humperdinck, was so taken by it that, with his sister’s help, he added to the four songs he originally wrote for it, and eventually turned it into a full-blown opera.

Therefore, keep a keen eye on children’s playmaking. Masterpieces may be brewing. Keep an ear open for Humperdinck’s use of children’s nursery songs. "Greedy little mousey, who’s nibbling at my housey" may remind us of "Ring around a rosy." It was a mark of his humour and his treatment of the darker forces within the tale that Humperdinck put such a tune into the mouth of The Witch, at her first appearance, a moment of terror in the play. Indeed, the Witch’s music in this opera has befuddled both of us directors. If we are honest it annoyed us at first! Especially when compared to the gorgeously lush tunes of earlier characters. But then a witch is neither a sweet child nor a good fairy. We also comforted ourselves with the thought that the composer wished not to terrify his audience. He was creating a musical portrait of a shapeshifter, mercurial and unpredictable. There is only one thing scarier than a witch: an unpredictable witch.

One of the driving principles behind our work is to strive not to cause our audience undue anxiety. Yet here we are, potentially causing great anxiety by moving from the traditional forest setting to a… hotel!? Why the move? Firstly, because when the idea to set it in a hotel came along we just couldn’t let go of it. (Ideas are precious, even the bad ones.) Secondly, we were reluctant to embrace the traditional version with all its potential for Tweeness (sorry).

We got a sneak peak into the #HanselandGretel props room from Eimer Murphy at the @AbbeyTheatre. Don't they look good enough to eat? #MondayMotivation #INOHansel @TheatreLovett 🍬🍭🍰 pic.twitter.com/E9SKchygwD

And lastly, because we have heard all too often the line that the original tales were so very cruel, bleak and impoverished. But, someone shouts, that was because times were different then, weren’t they? It depends on your perspective. Do we really need to conjure an imagined path through medieval woods to see the brutality of the Grimm’s world?

Open your front door and then, dare we say it, open your eyes. Times are still hard. Children grow up in confined spaces, eat their dinner off streets paved with gold and spiral downwards while the wickedly rich cook their books. Plus ça change…

Whether you are a child, an adult who remembers what it was like to be a child, or anyone curious and open-minded who wishes to engage with opera that can amuse, involve and sometimes scare, Theatre Lovett aim to offer you opera as adventure.

We strive to create work that engages young and old in the one sitting. To misquote Mr. Wilde, to bore an adult may be regarded as a misfortune; to bore both the child and adult looks like carelessness. It doubles our workload but we try our best. It is always our hope that sharing a Theatre Lovett piece empowers children and their adults to embrace life, with all its light and shadow.

Theatre Lovett first addressed the story of Hansel and Gretel in 2015 when The True Story of Hansel and Gretel had a run at the Dublin Theatre Festival. Two people who saw that show were Abbey Directors Neil Murray and Graham McLaren. They have been supporters of our work since and have in the past invited two of our shows, They Called Her Vivaldi and FRNKNSTN, onto the Peacock Stage.

We are proud that, along with this being our debut main stage show at the Abbey, our National Theatre has a place for work conceived, designed and specifically directed to engage both young and old, in the one sitting. And an opera at that!

Hansel and Gretel is at the Abbey Theatre from February 8th - 15th, then tours nationwide through March - more details here. 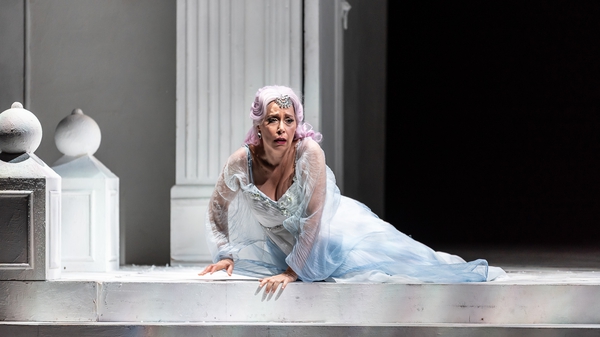