Choreographer Liz Roche writes for Culture about dance, Brexit, boundaries and belonging, and her latest work, The Here Trio, which premieres in Belfast this February.

It’s an interesting time and place to be making a dance about boundaries and belonging.

I'm working with three dancers, Ryan O'Neill, Gloria Ros Abellana and Sarah Cerneaux. In the piece, the dancers' movements convey bodies that are slightly 'outside' of themselves, bodies that are agitated and driven, even stressed. They displace and replace each other in space, forming unstable agreements and testing the limits of their cooperation. The sound score features drums only, from drummer Bryan O'Connell and there is lighting design by Stephen Dodd and sound design and visuals by Luca Truffarelli.

Dance captures the body; its patterns, movements, expressions and energies. A person can say a thing but if their body isn't behind it, it doesn't have any weight or conviction.

Maiden Voyage Dance are co-producing The Here Trio with my company, and we are thrilled to be actively engaged in a cross-border collaboration at a time when there has been so much confusion around our shared future on the island of Ireland. It is definitely the right moment to come together as artists and reaffirm our position of openness and interconnectivity. I've been lucky over the years to collaborate, tour and perform with many northern Irish artists and companies. I hope that Brexit won't have any long-lasting negative effects on North/South relationships between artists and arts organisations. In the last three years, I've seen how the arts sector in the North has been negatively impacted by the lack of government so my hope is that Brexit won't further the difficult situation making it harder for collaborations of this nature to be realised in the future.

The Here Trio itself has a curious energy, as it's goal is to separate and disembody, working against the natural organic flows of energy in the body. Voices are separated from mouths, silences become deafening, images fracture and reform in different places. The senses are independent of each other, stuck in over-exaggerated comparisons and from there, often jumping to the wrong conclusions. Time doesn't flow, but hiccups along, with memories and imagined histories erupting from time to time. The body is a source of sound, as the beating heart emanates and the drum overtakes and accelerates the pace.

In making the piece I thought first about the history of the actual site of The MAC Theatre in Belfast where we will premiere on February 7. I read up on the previous street names for Exchange Street West, and found a few unsettling and darker moments in the streets' history. I thought about all of the traffic of life that passes through a particular point in space – a 'here' - over years and years. I thought about how physical scars are indelible and act as triggers of memory in contrast to a site, where a new building can alter the map, and quickly erase the memory.

Childhood images of the North came back to me. I remember being scared crossing the border, with all of the graffiti on approach and then the soldiers everywhere, and further up the road armoured cars through the streets. Years later, when living in London, I remember being careful not to speak too loud on public transport. Making sure not to draw unnecessary attention, even with a Dublin accent. Maybe it was unnecessary fear, who knows.

It is definitely the right moment to come together as artists and reaffirm our position of openness and interconnectivity.

Dance captures the body; its patterns, movements, expressions and energies. A person can say a thing but if their body isn't behind it, it doesn't have any weight or conviction. In dance, we highlight what the body does before words are formed. We explore instinct, and gut reaction before the thinking mind has too much time to get in the way. In The Here Trio we have really tried to trust that unstable place and locate the piece there. It can be unsettling but mostly invigorating.

The Here Trio is part of a double bill of new work, performing alongside Brink by Eileen McClory – it premieres at The Mac, Belfast on Feb 7 & 8, with performances at The Market Place Theatre, Armagh (Feb 12), Dance Limerick 2020 (April 23) and the Live Collision International Festival at the Samuel Beckett Theatre, Dublin (25 & 26 April) - find out more here. 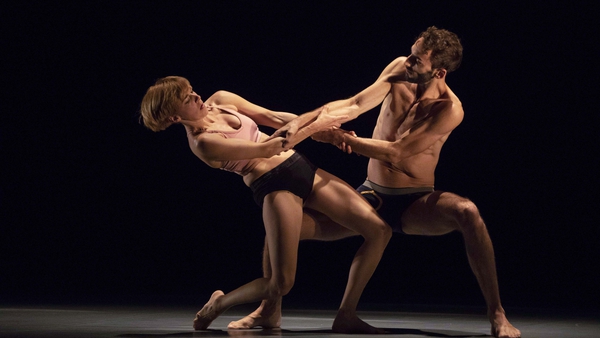