We spoke with Ross Noble ahead of the Galway Comedy Carnival to discuss his new show, Humornoid, and his 28 years (!) in comedy.

In old science fiction movies, depictions of the 21st century went one of two ways; the world was full of incredible technology - the hoverboard and self-lacing shoes of Back To The Future: Part II - or it was transformed into a dystopian wasteland ruled by humanoids - Arnold Schwarzenegger in The Terminator.

In the latter, a humanoid was something that resembled a human without actually being one - but why does it have to stop there? With the title of his new show Humournoid, comedian Ross Noble poses the question: What happens when pure comedy takes human form?

"In sci-fi, you always hear about humanoids and I just thought, what if, instead of a humanoid you had a humournoid - a thing that is purely about being funny," Ross told RTÉ Culture.

"I came up with that and thought I was being very clever...Then I realised it just sounds like hemorrhoids."

Right. So maybe the future of humanity and comedy won't be discussed in the show but, then again, you just never know with Ross. The Englishman is renowned for his improvisational skills and high energy performances, both on and off the stage - remember when he tackled Jonathan Ross during an interview?

In fact, after 28 years of stand-up with countless gigs to his name and 17 nationwide comedy tours under his belt, we would say the 43-year-old has a knack for this whole comedy thing.

"Yeah, it's working out! I'll have been doing it for thirty years in two years' time. I've been doing it since I was 15 so if it hasn't clicked by now, I'd be a bit sad," he laughs.

"I do get a different enjoyment out of it now though," he admits. "When you first start, the venues that you're playing are so varied and the audiences are not quite sure what they're going to get. Whereas now, the more you do it, the more the audiences know what to expect. There's a short-hand now."

On Instagram, Noble has a respectable 14.8k followers; on Facebook, his fan page has a whopping 175k likes; on Twitter, he has a jaw-dropping 852.8k (and rising) followers. More than just a fan-base though, the performer has amassed a community of loyal followers who keep an eagle eye on his career, for better or worse.

"One side of it gets easier and the other side gets harder," he explains. "It becomes easier because people kind of know what you're about, but it becomes harder because people come to the show and they're comparing what you're doing that night to everything they've seen before. You're constantly competing against yourself."

Not only does the funnyman have to compete with his own material but he has to deal with unhappy fans who now have direct access to his inbox, thanks to social media. The day before I phone Ross, I look through his Twitter feed and spot one such message.

Calling him "Mr. America", the disgruntled fan questioned the comedian as to why Billingham - a small town in County Durham in England - didn't make the cut for his new tour. Surprisingly, Noble took the time to reply to the man, explaining the situation and promising that his upcoming projects would make up for it.

"The funny thing is, I haven't needed to play Billingham for about twenty years," says Ross. "The theatre holds about 600 people, something like, so before I do a tour I go up there to do a run-through. I don't advertise it, we just do a few nights to test out the lights and the set.

"I think that person was complaining that I'm too much of a big shot to go out of my way to Billingham - it is really out of the way - but I always go because the crowds are great and they're so happy to see you going back. But that's the dilemma."

"I can play everywhere and do 150 dates or I can do the big cities and do 10 dates. It's tricky because there's only so much time in a year and I've got three other projects that I'm trying to work on. I try to keep everyone happy."

Is it just me, or is that exactly what a Humornoid would say?

If you do want to see Ross, you'll have your chance this weekend at the Galway Comedy Carnival and across the globe in 2020 when he brings Humournoid on tour.

For more information on the Galway Comedy Carnival - click here. 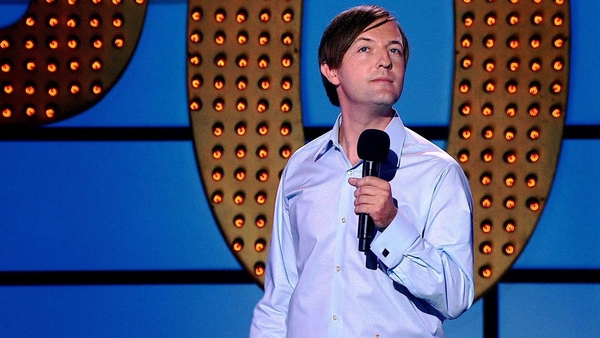