In an exciting new development this year, Wexford Festival Opera and RTÉ have partnered with Classical Arts Ireland (promoters of classical music, theatre and ballet in Ireland) to broadcast Wexford’s stunning production of the Baroque opera, Dorilla in Tempe by Antonio Vivaldi in the Lighthouse Cinema, Dublin, Pálás Cinema, Galway and Century Cinema, Letterkenny on Saturday 2nd November at 8pm. This marks the first time that an Irish-produced opera will be broadcast live in cinemas – a welcome Irish addition to the popular screenings of live international opera and theatre regularly on offer in cinemas nationwide.

Audiences across the country and the globe who can’t make it to either the festival or the cinema screenings will also be able to tune in, from the comfort of their own homes, to the worldwide live-stream of this sold-out production - in full HD vision and RTÉ lyric fm broadcast sound - online at RTÉ Culture and on the RTÉ Player from 8pm on Saturday 2nd November.

In addition, radio listeners can enjoy the opera in glorious stereo sound on Opera Night with Paul Herriott on RTÉ lyric fm on Saturday 2nd November from 7pm-11pm. The production will also be offered to radio broadcasters across Europe as part of RTÉ lyric fm's partnership with the European Broadcasting Union (EBU).

Famous for being one of the most productive composers in music history, Antonio Vivaldi wrote over 50 operas, though he is probably best remembered for his orchestral works. Dorilla in Tempe was reputedly one of Vivaldi's own favourite compositions, and the score, notably the opening chorus, there includes a reworking of part of the Spring movement from his celebrated The Four Seasons, published just shortly before the premiere of this opera in 1726. It tells the story of the obstacles faced to the blissful union of Dorilla (a princess) and Elmiro (a shepherd), whose rival Nomio turns out to be the disguised god Apollo.

Wexford Festival Opera was born out of the community back in 1951 and that support is just as strong now as it was back then. Local Wexford audiences are invited to the Jerome Hynes Theatre in the National Opera House to enjoy the local atmosphere while watching the live-streamed event in a free ticketed screening hosted by RTÉ lyric fm - tickets are available from the National Opera House box-office. Doors open from 7.30pm; and the opera broadcast begins at 8pm – with RTÉ lyric fm goodie bags for the first 100 to arrive!

So if you can’t make it to Wexford, let Wexford come to you! 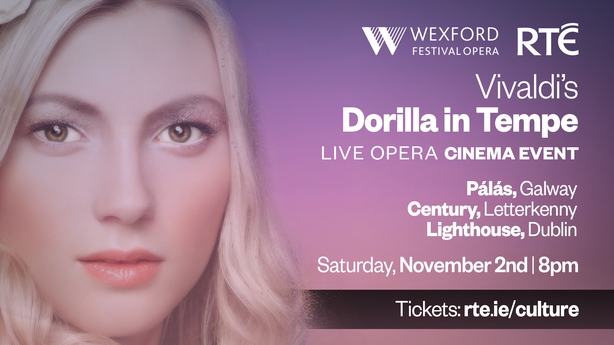 For more information and to purchase tickets for the cinema screenings, go here: