Producer Trevor Birney writes for Culture about No Stone Unturned, his controversial documentary on the 1994 Loughinisland massacre, which receives its Irish TV premiere on RTÉ One on Wednesday 2nd October at 9.35pm - watch No Stone Unturned now, via RTÉ Player.

New Year 2012 began with a long email. It was from a solicitor representing the families of the victims of the 1994 Loughinisland massacre. In it, Niall Murphy, set out the background to their search for truth and the hope that we would consider making a documentary about the events of 18th June, 1994.

Looking back on that summer evening 25-years ago, many will be forgiven if their first thoughts are of a soccer game and one of the greatest victories in Irish sporting history.

But for the families who still live in and around what's little more than a crossroads in south Down, it will be forever associated with the horror visited upon them when a gunman stepped through the door of their local pub shortly after half-time and opened fire with an automatic rifle.

In the blink of an eye,  six men died and five others were injured. The gunman only stopped when he emptied his magazine into a packed bar room that would struggle to house a family-sized car.

Clare Rogan heard there had been a shooting at the Height’s Bar but her first thoughts were that it was an accident. The Troubles had never reached this part of the world.

But what she saw when she opened the door of the bar still haunts her.

Bodies were piled up underneath the cloud of smoke caused by the gunfire.

Her husband, Adrian "Frosty" Rogan was among the dead. He’d only gone into the bar to pick up tickets for the Ulster senior semi-final match between Down and Monaghan the following day.

Aidan O’Toole’s life changed forever that night. His family owned the bar and he was serving drinks when the gunman struck. They were short-handed that night as his father Hugh along with other villagers were on a trip to Romania to help build an orphanage.

Aidan survived but the bullet lodged in his kidney serves as a reminder of that night.

He says he is one of the lucky ones.

Eamon Byrne and Patsy O’Hare also died that night. Eamon’s widow Marie provided police with pictures of her husband and their new-born son, Declan, but the RUC somehow managed to lose them.

Malcolm Jenkinson had been taken to the pub by his son’s best friend, Colm Smyth. Malcolm died, Colm survived.

When the gunman came through the door, Barney Green was sitting just inside, smoking on his pipe. At 87-years-old he was the oldest person to die in the Troubles.

As soccer supporters throughout the island celebrated the famous win in New Jersey, the Loughinisland families prepared for six funerals with the same quiet dignity and grace they’ve maintained throughout the past 25-years.

The RUC, having found the getaway car, the boiler suits worn by the killers and even the weapons they’d used, promised to leave no stone unturned. The families were patient, hoping that they would one day see justice for their dead loved ones.

Ceasefires came and went, the Good Friday Agreement marked the beginning of a new dawn. In time, the people of Loughinisland came to the realisation that the killers would never be caught.

But that only led to the question: Why?

Why, despite the "treasure trove" of evidence, had the police failed to bring the killers to justice?

Almost 18-years on, in his New Year email, Niall Murphy urged us to help find the answers.

That is now almost eight years ago. Barry McCaffrey led our investigation into the attack, going back over every scrap of information he could find, over and over again.

I met Alex Gibney in a pub in Galway after he’d given a masterclass in storytelling. He’d just won an Oscar for his film, Taxi To the Darkside which examined the case of a taxi driver tortured and killed by American soldiers in Afghanistan. We worked together on a film, Mea Maxima Culpa.

On a hot afternoon in New York, I told Alex about the Loughinisland attack. He lived only a few miles away from Giants’ Stadium and remembered the Irish win over Italy.

That afternoon he agreed to direct the documentary.

By the time it premiered in October 2017, the Police Ombudsman for Northern Ireland, Dr. Michael Maguire, had filed his report on the attack.

Collusion was the simple answer to the families’ burning question.

Alex was determined to go further; to help audiences around the world understand and appreciate what collusion looked like when every stone was turned over.

There had been many, many emotional moments during the production of this film but none like the night it was shown to an audience of 400 back in the village of Loughinisland. With Barry McCaffrey and the other members of the team in the audience, the families said they now had their truth.  They only wished that the thousands of other victims in Northern Ireland could have theirs.

For reasons that remain unexplained, the PSNI watched No Stone Unturned and responded not by going after the killers, but by arresting Barry McCaffrey and myself. They accused us of breaching the British Official Secrets Act by using leaked documents in the film.

In May this year, the Lord Chief Justice in Northern Ireland ruled that the police had acted unlawfully. 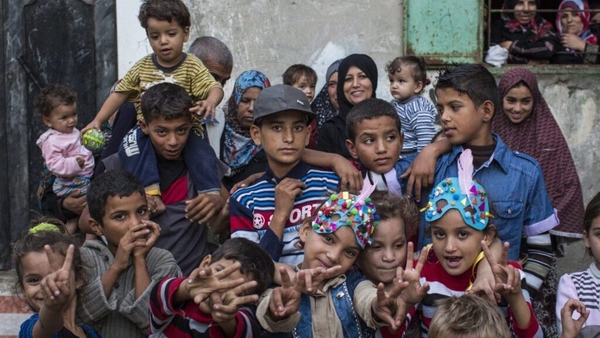