Dubbed 'a play without performers', Dead Centre's new production Beckett's Room tells the story of the apartment in Paris where Samuel Beckett lived with his partner Suzanne during the Second World War.

Dead Centre founder Ben Kidd writes for Culture about creating 'a small story about real people amidst big events', and how the 'urge to re-create historical figures is an itch that will not stay scratched'.

Nothing sells tickets like real people. Biographical stories are perennially popular, especially onscreen; each era decides which events from their history should be simulacrised and re-presented: in 2017, just after the Brexit vote, Gary Oldman wore a fat suit and a prosthetic chin to play Winston Churchill in a film deliciously titled The Darkest Hour. He won an Oscar, of course, because this kind of work – pretending to be a real person – is deemed to be the zenith of the actor's craft: Nicole Kidman is Virginia Woolf; she won an Oscar. Ben Kingsley is Ghandi; he also won an Oscar. Liam Neeson was deprived of the Oscar, but he was Michael Collins.

Before we even get to the slightly queasy way in which biopics perhaps cheapen and exploit the actions and struggle of, say, Nelson Mandela, it’s worth noting that these kind of feats of acting in themselves present a strange, somehow uncanny proposition. Because, however closely Will Smith can be made to resemble Mohammed Ali, we know full well that he’s not Mohammed Ali. Everyone in the audience knows exactly what Mohammed Ali looks like; if they didn’t, they likely wouldn’t be at the movie. So regardless of how detailed the design, how expensive the prosthetics, these projects often have at their very heart an advertisement of the artifice they are trying to escape.

But the urge to re-create historical figures is an itch that will not stay scratched. Possibly it is just a very lucrative manifestation of a human need: to share in the ritual of watching our own history back, to better understand why the great figures of our times did what they did; to guarantee we don’t make the same mistakes again. This was the driving force behind the early Greek drama - which represented the wars of mythological history from various angles - and of Shakespeare’s History plays.

It is generally understood that Beckett chose to answer the question about how an artist should respond to tragedy by turning away completely from realism, showing characters seemingly unrooted from social reality, adrift in strange, abstract stage spaces.

In both of those cases, and in the case of Gary Oldman’s chin, the artists portrayed momentous moments, junctures in which the world was reconstituted. European writers, painters and composers were at one such moment in the years after World War Two. The idea that art reached an impasse at this moment is an old one, and best expressed in that line from every student philosopher’s favourite aphorist Theodor Adorno: "To write poetry after Auschwitz is barbaric… it has become impossible to write poetry today". But even if we aren’t quite as hardline as Teddy, and decide that we must go on, great tragedy does present a challenge to the artist: how can we represent this rift that has been torn? How to show the faces and bodies of those who suffered, and those who caused suffering? Who has the right to tell these stories? How can the artist avoid the charge of exploiting people’s suffering; what should art aim to do? In the immediate aftermath of World War 2, both Bertolt Brecht and Charlie Chaplin answered this question by using comedy, creating characters based clearly on Hitler. Arthur Miller, whose family were Polish Jews, wrote several plays dealing directly and solemnly with the Holocaust, despite the fact that he was never there.

Sam Beckett was there. Or at least, he was in Paris when the Germans arrived. He and his partner Suzanne were living in a small drafty apartment, with an old sofa given to them by James Joyce. They were eking out a living, surviving on handouts from back home, because the literary career hadn’t yet exactly taken off (in 1941, he sold 7 books). They were there when the chance arose to take part in history and they took it, joining a Resistance cell. But after a close friend was arrested they left Paris, trudging for days through the countryside, sleeping by the side of roads, scavenging for food. They spent the rest of the war in the relative safety of the village of Rousillon. By the time they returned, the world had changed; the friend, Alfred Péron, had died in a concentration camp.

It is generally understood that Beckett chose to answer the question about how an artist should respond to tragedy by turning away completely from realism, showing characters seemingly unrooted from social reality, adrift in strange, abstract stage spaces. These formal choices have seen his work understood largely as something universal, which speaks not to a particular historical situation, but to the whole of humanity: in the words of the critic Maurice Nadau in 1951, Waiting for Godot speaks to "the absurdity of the world and the meaninglessness of our condition."

But the more closely one looks at his work, the less universal it starts to feel. The opening stage direction in Waiting for Godot ("a country road, a tree") can start to seem like it refers to something quite specific: the landscape that he and Suzanne trudged through on their way out of Paris. In the early drafts of that play the character of Vladimir was called "Levi" – a name which would have been instantly recognizable as Jewish, and would have fixed the play to the most notable event in recent world history. Through his refinements, Beckett chose to remove that detail. But even after this "vaguening", we still see beneath the skin of the universal a very particular skull: two French tramps in dusty aristocratic clothing, on their way somewhere, sleeping in ditches, being beaten whilst somewhere else, the world is falling apart.

Perhaps this "vaguening" was not a search for universality. Perhaps, since there was so much of the war for which Beckett was not "there" he had to invent a new way of bearing witness. He had to make things less clear, more obscure. Perhaps he was in fact desperate to try to represent history directly, but had to account for the fact that he was not present, and nobody is ever present, for all of it. As Fintan O’Toole writes, "his work is ultimately defined by the things that nearly happened to him but did not. He escaped the worst but never got over it. Vladimir’s questions — 'Was I sleeping, while the others suffered? Am I sleeping now?’ — haunted Beckett himself."

In all likelihood, Sam Beckett would have detested the idea of seeing an actor pretending to be him on stage. And besides, we could never afford the prosthetics. So, in Beckett’s Room, we have tried to tell a small story about real people amidst big events, but we have removed their bodies entirely. We are accepting the artifice that always lingers over biographical stories, and trying to think of a new way to represent the real.

Beckett's Room in a coproduction between Dead Centre with Mark O'Halloran and The Gate Theatre runs from 24th September, as part of this year's Dublin Theatre Festival - find out more here. 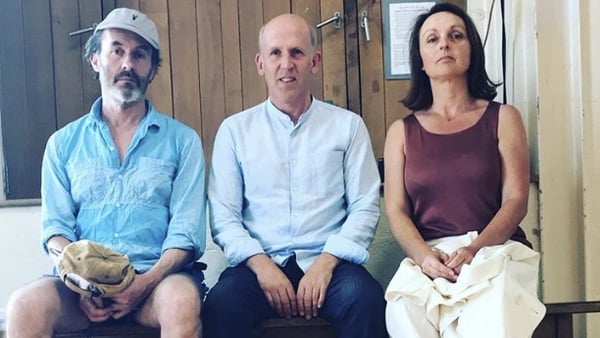 How It Is - Gare St Lazare's further adventures in Beckett