From Monday 16th to Friday 27th September, you can hear one story every weeknight at 11.20pm on RTÉ Radio 1 from the shortlist of this year's Francis MacManus Short Story Competition.

A widowed man, surrounded by the clutter and detritus of his life, loses a precious companion...

I leave him on a dreary, blowy Tuesday afternoon, a little while after lunch, when he is solid asleep in the armchair. Three ticks of the second hand on the clock on the mantelpiece. I am with him and then I am not.
That night he has three dreams. In the first he is a child of six, flying a kite with his brother in a storm. In the second a woman he doesn't recognise insists she’s his wife. The dream wakes him up unnerved and needing to pee. He drifts back to sleep, and in the third dream he realises something isn’t right. He groans awake.
He turns on the lamp and looks at his hands. His ring finger has a slightly pale mark. He rubs at it and shivers. He remains in bed for several more minutes, then gets up and pads the carpet carefully. He bends down, looks under the bed, on the nightstand. He goes into the bathroom. Many of the tiles are cracked and the grout is blackened and mouldy in spots. The black and white pattern was her choice. He always thinks it’s too hectic in spite of its geometry. He’d prefer bigger tiles. Standing in the bathroom feels like being lost in an infinite set of chessboards.

He returns to the bedroom and sits on the bed. His trousers are hanging as usual on the back of a chair by the window. He checks the pockets. There’s some change, a crumpled hankie and the stub of a train ticket to Skerries.

His wife’s voice is a slumbering grunt.
"Come back to bed."

The lights in the kitchen are too dim to see the floor properly. He gets a torch from the pantry and spends fifteen minutes pacing the room. There is nothing except dirt in the corners and on top of the skirting board. He is surprised at how filthy it is. Honestly, what’s going on? The bathroom tiles, now this. He’ll clean it tomorrow, and give the floor a good mop.

He looks on the kitchen counter. He looks by the sink and by the cooker and in the presses. He checks all the drawers, even the bottom one which hasn’t been opened in so long he has to wrench and jiggle it. It’s stuffed with appliance manuals, batteries, a pair of dull scissors and bits of twine.

"Why do you keep all that junk? We haven’t had an electric carving knife in years, remember? We finally threw it out when it stopped working and you couldn’t fix it."

"I still think we should’ve got a new one covered by the guarantee."

Her laugh sounds like a motor struggling to turn over.

"We had the blessed thing fifteen years. The guarantee was long gone."

She’s sitting at the kitchen table in her yellow nightie, her mouth curved in either a grimace or a smile. Her hair is a bird’s nest, thatched and crumpled. There are liver spots on her arms and her toenails are yellowed and curled.

"It’s the middle of the night. I want to go back to sleep. We’ll find it in the morning."

He spends most of the next morning searching. He looks again in the bedroom, the bathroom, the kitchen. He checks the basket of dirty clothes, then the dryer. He tries not to use it too much, it eats the electricity, but she was sick of hanging up the washing outside.

He tackles the living room. He pulls up cushions. His mouth fills with the grey taste of dust. He reaches down the back of the couch. Coins. Buttons. Mouldy sweets. Postage stamps, of all things.

He moves the furniture around the room and stares at the carpet. The colour, a sort of speckled eggshell, was her choice. There’s a large reddish stain. He can’t remember if it’s wine or curry. The carpet’s frayed in spots and he can see the path he’s worn in his daily trudge to and from the kitchen.

Dancing in the ballroom on New Year’s Eve a thousand years ago. Her long red hair was swept up. She wore a green silk dress and matching shoes, a costume brooch that could maybe pass for sapphire in the right light. She was looking up at him. He could smell her perfume, the sharp sweetness of it. His suit was too tight; he’d piled on a few pounds since he last wore it, that was at his brother’s wedding. He was careful not to step on her toes.

You’re a grand dancer."You’re not so bad, yourself." She laughed – a guffaw disguised as a titter. He fell first for her laughter, for its coarse promise hiding behind grace.

On Thursday he looks in Sophie’s room. Their daughter’s bed is neatly made. There are pillows propped up and Sophie’s collection of stuffed toys on the windowsill. There are posters of pop stars and film actors. He sits on the bed and looks at the nightstand. There are books in a neat pile and a reading lamp and Sophie’s keys. He likes to think he can still smell her perfume.

By Friday he has searched for me in almost every corner of the house, and has taken to looking again in places he’s already been, hoping as people often do that lost things will suddenly reappear. He can’t find me because when I slipped from him I rolled under the drinks cabinet and came to rest leaning behind a caster.
He goes out to the garden. The lawn is choked with weeds. He looks at the slick of green on the surface of the pond. He should drain it and fill it in. The bird feeder has toppled over. Dandelion spores scatter and dance in his wake as he tramples to the shed.

The rank fart smell of engine oil. There is a rusty saw hanging off a nail. A coiled and buckled hose in the corner. Wobbly shears and a scythe that couldn’t cut paper. Three lawnmowers. A petrol model that spews blue smoke and struggles when he pushes it up the slope at the back of the garden. An electric one that hasn’t worked in years. And a proper old-fashioned push mower, the blades dull but it still does the job, doesn’t it? The guts of an old wireless spill out on the counter. A faded, tatty parasol is propped up in the corner next to deckchairs that haven’t been unfolded in years.

He rubs at his ring finger. He thinks he might find me here? Is he mad? He’s trying to remember when he last noticed me. He thinks maybe it was Skerries. I’ve been with him for so long that even after letting me go, I can sense when his mood ticks over from joy to fury.

He feels her watching him as he pokes through the toolbox and opens drawers filled with bolts and lightbulbs.

"Do you remember you promised to build me a gazebo?"

"I’d have had to varnish it every other year."

It was lashing down the day that they chose me and my partner. They stood under the awning for a minute before coming in, both of them making a single puddle. He shook out his umbrella and fanned his gabardine. She took off her scarf and gloves. The old jeweller’s glasses were smudged but he had a plump, kind face. Holding her hand, his own was thick and stumpy like a butcher’s.

"Why is it always this finger, do you know?" she asked.

"Vein of Love." He tapped her ring finger. "Runs from there right to your heart."

Her ring was narrow and bright. I am rather plain, broad and quite thick, and my shine has always been dull. He likes that, and he likes the clunky weight of me.

She placed me on him on a rainy Saturday afternoon in October. He used to look at me quite often, then less and less, than got out of the habit completely. He catches glimpses of me now only by mistake. He never took me off, not even that time he went on a business trip and had it away with a prostitute.

Later he went to Skerries at low tide and walked to the water’s edge. He took off his shoes and socks, rolled up the bottom of his trousers, stepped into the sea and tipped her in an ashen fall into the water. He stood there watching her greyness spread upon the rolling surface, the sound of gull’s cries overhead and the rumble of the waves.

Ten days after losing me, he’s in the armchair, snotty with tears.

"Bloody woman, I’ve grieved enough for you. Why can’t this end?"

She’s on the couch, her eyes barrelling into him.

"Why didn’t you cry when Sophie died?"

"Not a single bloody tear."

"Nothing dries as fast as tears, my mother always said."

"I go to Skerries once a month, you know, hoping the water will take you away forever. But you’re still here."

It doesn’t seem right to leave him there in that chair, blubbing like a child who’s lost his toy. I am right here still, glinting behind the front right caster of the cabinet. Seven months, ten days and three and half hours from this moment, he will finally find me. You’re happy to hear this, I trust, but you mightn’t be thrilled when I tell you what happens.

He falls, you see. Not just falls. Collapses like a demolished building. Lying on the carpet, dust swirling around him, trying to suck in air, he thinks, Typical, I’m dying in the living room. Then he spots me winking at him. He drags himself across the floor and reaches out to touch me.

Later, when they find us, he is sprawled like a sprinter, one leg bent upward, one stretched longward, a look of gruesome bliss on his face, and something golden in his grasp.

Vena Amoris, which was awarded second prize in this year’s RTÉ Radio 1 Short Story Competition in honour of Francis MacManus, will be broadcast on RTÉ Radio 1 at 11.20pm on Tuesday 17 September 2019, read by Eamon Morrissey and produced by Sarah Binchy. The three judges of this year’s awards were writer Liz Nugent, RTÉ’s arts and media correspondent Sinéad Crowley, and Declan Meade, publisher of The Stinging Fly. 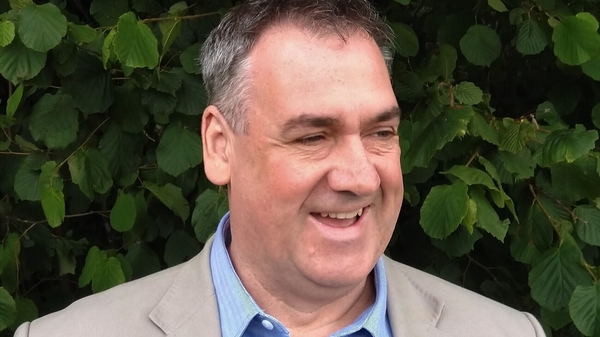