We're delighted to present an extract from The Emerald Dress, the debut novel by Vivienne Kearns, published by Poolbeg Press.

The Emerald Dress is set in the Dublin at the time of Jonathan Swift. The Irish capital is second only to London in terms of prosperity and progress. At the novel's heart is Abigail Harton, a physician’s daughter who is obliged to discreetly seek work while her father’s philanthropic focus, on setting up a pauper’s hospital, stretches her family’s resources.

Mary Gavin noticed the girl’s embroidered bluebird on her dress. 'Did you bring the pattern you talked about?’

‘It’s just an initial sketch.’ Abigail took the damask design out of the basket.

Hugh Gavin rose from his chair. He could see the embroidered version of the bluebirds on her dress, but he needed to see if she had the skill to translate her design into a pattern that he could interpret to thread the loom and weave the cloth.

‘It is very good,’ he said and glanced at Abigail. ‘We may have a commission for a cloth such as this. The fabric needs to be ready soon so that my sister can make a dress for the December ball at Boden Castle, held by the Duke of Alden. How quickly can you prepare a detailed design?’

Abigail nodded. ‘I can finish a full design in a couple of days. If you give me the payment for the pieces now, I’ll be on my way and can start this evening.’

She stood up and smoothed out the creases in her dress. Then she went into the back room. When she came out again, she handed Abigail the amount they had agreed on.

‘Tell your mother there is more work if she needs it.’

‘Well then, we’ll expect to see you with the design in two days.’

‘I will walk back with you,’ Hugh said.

‘I am grateful, but there is no need. I can make my own way home.’ Abigail stood up.

‘No, Miss Harton,’ Mary said. ‘It is not safe to go back alone. It grows dark and I insist that you are accompanied. What would your mother think of us?’

‘I’ll walk with you to the corner of Pluncot Street.’ Hugh was already putting on his cloak. Abigail didn’t want to waste money on a public cab as she had been instructed to do, so she waited for him by the door.

‘My mother and I are obliged.’

Abigail stepped into the lane, annoyed that she hadn’t got away on her own. She should have taken a cab. If anyone saw her walking alone with Mr. Gavin, she didn’t know what would be said of her. She hoped to marry to help her parents and would need to marry well. She couldn’t afford to ruin her reputation before she had a chance to meet a potential suitor. It was easier for Miss Gavin who was independent with a business of her own and a brother to protect her. Benjamin was little still. Her only chance for a secure life was to marry into one.

‘It’s a cold evening,’ he said after they had been walking in silence for several minutes.

‘Yes, it is.’ Abigail walked faster. If she could stay ahead of him by several steps, it might look as if they weren’t together.

He caught up to walk beside her. ‘Your mind is elsewhere, I think.’

‘You should go back. I will be all right from here. It’s starting to rain again, and I do not wish you to catch cold on my account.’

At that moment a beggar grabbed at Abigail’s skirts and Mr. Gavin pulled her away before releasing her. Abigail looked around – she recognised no-one she knew and was relieved.

‘I am sorry,’ he said, genuinely remorseful for having embarrassed her. He tried to think of something else to say but couldn’t find a suitable topic. Miss Harton had managed to gain on him again. For a small person, she certainly showed great strength.

He caught up with her again. They walked in silence until they reached Francis Street. It was raining more heavily now.

‘This weather reminds me of being at sea,’ he said, trying to catch her attention. ‘I’m glad I do not have to sail this winter.’

Abigail looked at him, curious despite herself. ‘Have you travelled far?’

‘I have been to Paris and London.’

‘What is it like in London?’ Her father had talked of his visits there and she longed to see it for herself.

‘I remember as a boy being scared that if I lost my master in the streets I would never find my way home again.’

‘And the clothes, were they very beautiful?’ she asked.

‘Yes, though clothes are beautiful here too. Your design is as good as any I’ve seen, and I’ve been weaving silk since I was a boy.’

Abigail didn’t know what to say.

‘I’d like to go to London myself one day,’ she said then.

If only she could travel. To see everything and do anything that she wanted. She looked up at the man walking beside her. She wanted to ask him more.

She worried again as they got closer to her home that if anyone saw her walking with a stranger, they would be sure to tell her father. They walked in silence until they reached the corner of Pluncot Street where she lived.

‘There’s no need for you to come any farther – my house is just there,’ Abigail said and walked away before he had a chance to answer. She was aware he was watching her and ashamed that she had not been more grateful.

When she reached her front door, Brigid opened it. They had no houseboy and the housekeeper had given her notice months ago. Abigail gave the maid her cloak and went upstairs to find her mother, who was sitting alone in the drawing room.

‘Yes, here it is.’ Abigail handed over the coins. ‘She says there is more work for us if we want it. They want to buy my design, Mama. Her brother will weave the damask cloth. My design must be ready in two days’ time so that she can make a dress for the Boden Ball in December.’ 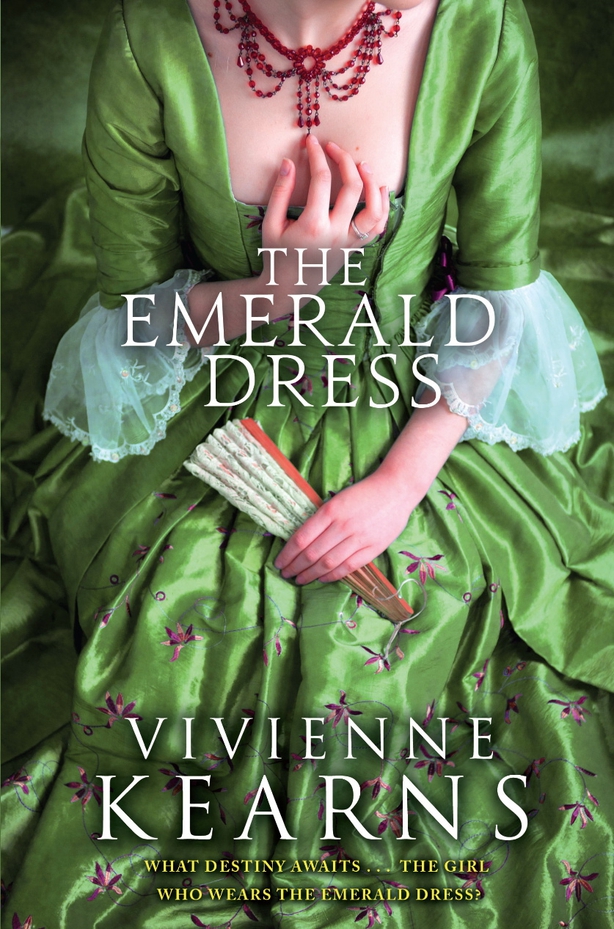 The Emerald Dress by Vivienne Kearns is published by Poolbeg Press, and is now available in bookshops, online and from Poolbeg.com.