In the aftermath of Waking the Feminists, Deirdre Mulrooney's remarkable new RTÉ lyric fm radio documentary Dancing with Lucia reassess the artistic significance and legacy of Lucia Joyce as an artist in her own right, with the help of Evanna Lynch (Luna Lovegood in Harry Potter) as Lucia Joyce and a cast featuring Olwen Fouéré, Bairbre Ni Chaoimh, Michael James Ford and Elliot Moriarty.

Listen to Dancing With Lucia below:

Aligning Lucia's promising modern dance career at the heart of 1920s Parisian avant-garde with Yeats' and Ninette de Valois’ Abbey Theatre Ballets for the first time ever, the programme reclaims the much-misunderstood dancer and asks, what if the overlooked daughter of the famous writer had been allowed to fulfill her promise?

Lucia Joyce, born to James Joyce and Nora Barnacle in Trieste, 1907, has captured the imagination of many writers and artists as tragic muse.

Filmmakers, dramatists, and novelists have projected everything from Mills and Boon-style narratives where the real protagonists are famous male writers (Samuel Beckett, one of Lucia's many boyfriends, and her father), for whom she is just a bridge, to unfounded stories of incest and child abuse, to comic-strip extravaganzas. How did Lucia get to be such a supine, empty space?

Apart from Carol Loeb Shloss’s groundbreaking and controversial 2003 biography Lucia Joyce: To Dance in the Wake, you don’t hear much about the facts of Lucia the dancer, who once declared in exasperation "c’est moi qui est l’artiste". I’m most intrigued, indeed riveted by Lucia, the artist in her own right, of whom the 1928 Paris Times wrote: "When she reaches her full capacity for rhythmic dancing, James Joyce may yet be known as his daughter's father".

Could Lucia Joyce be Ireland's Camille Claudel, an artist who died in obscurity and whose originality, and significance, came to be appreciated only after her death?

While making Georgie’s Vision for RTÉ Lyric FM, the first-ever documentary about Mrs. W.B. Yeats, another extraordinary and overlooked woman, I was thrilled to discover that news of Lucia Joyce’s prowess as 'public dancer’ had found its way into Yeats' correspondence with his wife, one month before that Paris Times accolade. The Nobel Laureate had just co-founded his short-lived Abbey Theatre Ballets in 1927 with Blessington-born Ninette de Valois (founder of the Royal British Ballet) and was on the look-out for outstanding dancers to help him realise his vision for his Plays for Dancers. 'Tom [Mac Greevy] has written praising above all other public dancers, James Joyce’s daughter', he wrote to George. 'We may use her someday.' The unfulfilled possibilities hinted at here are exciting indeed, both for Lucia, and for the ultimate development of dance as an art form in Ireland.

Lucia, who was 21 at the time, was causing a stir with her Modern Dance performances in top Paris venues, in the South of France, and in 1927 had even toured back to Trieste, city of her birth, with acclaimed young Modern Dance group Les 6 de Rythme et Couleur. This dynamic and idealistic young group of artists, 'in bare feet and tunics, wholeheartedly and unselfconsciously bringing in a new age', adorned Vogue and Tatler magazines, among others.

The finest moment of Lucia’s dance career, when she came runner up in Paris’s 1st International Festival of Dance, was witnessed by Joyce and his guests Tom Mac Greevy (who had tipped Yeats off about Lucia), Alan and Belinda Duncan (friends of Yeats), and Samuel Beckett (a fan of Yeats’s Plays for Dancers), in May 1929. To their delight, the dissatisfied crowd cheered support for Lucia: "L’Irlandaise! Un peu de justice monsieurs!". Beckett kept a photograph of Lucia that night in her magical, self-made, and indeed rather Yeatsian silverfish costume for the rest of his life.

I believe Lucia Joyce deserves to be considered for her actual artistic trajectory and achievements, unmuddied by subjective fictional flights of fantasy.

With her impressive avant-garde Modern Dance training, Lucia would have had a lot to contribute to the Abbey Theatre Ballets (1927 – 1933). She began at the age of 15 in 1922 with Emil Jacques Dalcroze’s Eurythmics, and immersion in Akademie Raymond Duncan, an alternative hippy-style commune in the posh Parisian suburb of Neuilly, run by counter-culture guru Raymond Duncan. Brother of Isadora Duncan, he lived as if he was a contemporary of Ulysses himself, wearing open-toe sandals and loose-fitting togas made of hand-made hemp, advocating an alternative Vegan lifestyle. Beginning to create her own choreographies, Lucia embraced his unconventional philosophy, and the 'Greek dancing' movement style, emulating poses as seen on Grecian urns, accompanied by Grecian lyres and other antique instruments.

In 1925 Lucia took up training with a new mentor and mother-figure, Margaret Morris (grand-daughter of William Morris), founder of her own eponymous Montessori-inspired, free movement style, which is still going strong in the UK to this day. Despite the fact that Lucia turned down a job offer from Elizabeth Duncan to teach at her Darmstadt school, a focus on solvency and independence is evident from the 'Physical Training' business cards she made for a prospective business venture with her fellow dancer Kitten Neel – with whom she had also danced a duet in Jean Renoir’s 1927 film The Little Match Girl:

A modern young woman, Lucia had a series of boyfriends. Not unlike Mary Wigman, founder of German Ausdruckstanz/Dance of Expression, after a few broken engagements, Lucia suffered a nervous breakdown. While Wigman survived her breakdown to become one of the most important modern dance practitioners of the 20th century, Lucia was incarcerated by her brother, and ended up trapped in mental asylums for most of her life, with many equivocal diagnoses, variously put in straitjackets, and once even injected with bovine serum. (Giorgio Joyce, quite a tragic figure himself, would also commit his ‘marvellously wealthy’ older wife Helen Fleischmann to a mental institution). Alas, Lucia’s father, her greatest champion and supporter, died when she was just 34. After his death, Nora never visited Lucia again. Giorgio only visited her once, in 1967. Go figure! Lucia outlived them both, until 1982, in Saint Andrew’s Mental Asylum in Northampton.

But the family meddling didn’t stop there. Lucia’s only nephew Stephen, for whom she knitted a lovely jumper when he was born in 1932, took the majority of her writing – allegedly including a novel and poetry – as well as her much-cherished correspondence with her father, from the National Library of Ireland, and destroyed it in 1988. Family friends were also encouraged to destroy all correspondence, thus silencing Lucia, robbing her of her agency, and rendering her into a supine empty space, albeit a most compelling one, for anyone to project just about any narrative they like.

As a Dance Historian keen to restore the lost ‘herstory’ of Modern Dance in 20th Century Ireland, in which I believe Lucia is a key figure to be reclaimed, I believe Lucia Joyce deserves to be considered for her actual artistic trajectory and achievements, unmuddied by subjective fictional flights of fantasy.

Could Lucia have continued on the legacy of the Abbey Theatre Ballets, Ireland’s answer to the Ballets Russes, when de Valois left in 1934 to found what would eventually become the Royal British Ballet? After Frederick Ashton turned him down, was Lucia the answer to WB Yeats’s search for a dance artist to take over from De Valois? Emulating De Valois’ Ballets Russes pedigree, Lucia had taken up rigorous training in Lubov Ergova’s Ballets Russes Feeder School in Paris in 1929. I think it’s wrong to equate this with the ill-fated Zelda Fitzgerald, 7 years older than Lucia, who started training at the same school 2 years previously. Lucia would have been au fait with what was afoot at the Abbey Theatre Ballets via George Antheil, the ‘bad boy of American music’, who was composing an iconoclastic score for WB Yeats’s Fighting the Waves, featuring de Valois at Dublin’s Abbey Theatre at the same time as being a guest at Joyce’s 1928 Paris birthday party, bringing the Joyces to see the Ballets Suedois, and working on an opera with Ezra Pound and James Joyce. All evidence that the Abbey Theatre Ballets were very much on Lucia Joyce’s radar.

Paradoxically, while Joyce, author of the 20th century epic of the body, Ulysses, delighted in avant-garde Modern Dance, from the Ballets Russes to the Ballets Suedois, and Lucia’s artistry and involvement in the milieu fed his work, particularly Finnegan’s Wake’s Issy, and the Rainbow Girls, he pronounced it ‘unseemly’ for a girl to appear on stage dancing. He did unfortunately, and perhaps reluctantly, ultimately encourage Lucia to jettison the dancing for a career in illustration. For Nora, a victim of unconscious misogyny herself, a woman could only be a muse and a servant, certainly not an artist with her own agency. She was even less enthusiastic about Lucia’s Modern Dance career. According to Mrs. Giorgio Joyce, Nora, ‘nagged’ Lucia until she finally gave it up, around 1932.

Could Lucia Joyce be Ireland’s Camille Claudel, an artist who died in obscurity and whose originality, and significance, came to be appreciated only after her death? 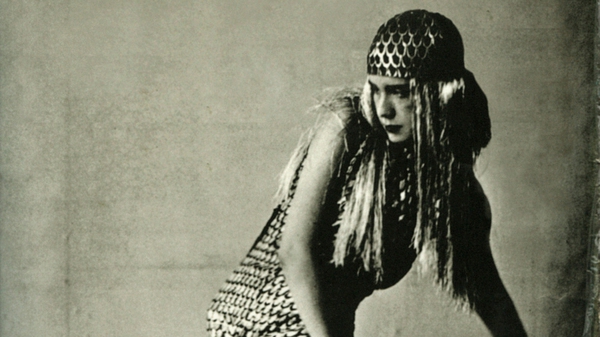