We caught up with comedian Adam Hills ahead of the Kilkenny Cat Laughs Festival to discuss his love for Dublin, his daughters' burgeoning interest in comedy and his family's plan to return to Austalia.

"I have a five-minute routine that I'll do in Kilkenny that I can only do in Ireland," says Adam Hill. "I can't do it anywhere else in the world, and I love that. I'm really proud of that, that it's not just your standard Irish joke; it's something that only Irish people will get and laugh at."

The 45-year-old comedian, who lived in Dublin from 1999 to 2002, will soon return to his "second home" for the Cat Laughs, where he will perform alongside Nish Kumar, Tommy Tiernan, Jena Friedman, Julie Jay, and Jason Byrne - to name but a few - as well as hosting a chat show with three of his favourite comedic writers.

"No one is a headliner, and everyone is a top quality act. You're not competing for review and there are no awards, it's not like other festivals where you live and die on the review. Genuinely, it's a celebration of stand-up comedy. It's ideal, it's the best of all worlds for every comedian."

Hills kicked off his own comedic career in 1989, at just 19 years of age, when he started gigging at the Sydney Comedy Store while simultaneously presenting a breakfast slot at his local radio station. However, such was his love for travel, he began touring internationally by the early 1990s and has bounced between Adelaide, London, and Dublin ever since.

"It's just a little luck that brought me to Dublin, but I absolutely love it. It felt at the time - and still does, in a weird way - like a second home for me. I have a genuine love for it," he insisted.

In 2005, having lived in London for three years, he returned to Adelaide to present a music trivia show called Spicks and Specks, a show that raised his profile enough that he boomeranged (sorry) back to London in 2012 where he was asked to host a Channel 4 comedy chat show The Last Leg during the Paralympics.

As a person with a disability himself - he was born without a right foot and wears a prosthesis - and with a knack for finding the funny in unlikely circumstances, Hills' show was hailed as a triumphant success. So much so that he and his co-hosts, Josh Widdicombe and Alex Brooker, were asked to continue on, long after the Games had ended.

"When you're talking about disabilities and the Paralympics, you have to find a way to be genuine and funny at the same time - you can't just mock people with a disability, as it turns out," he laughs.

"In the first series of being a topical news show, Oscar Pistorius killed Reeva Steenkamp and we had to cover it because it felt weird not to - he was such a big part of the Paralympics on our show. We found a way to talk about it respectfully and not make jokes about it.

"Then, as the trial progressed, we were finding a bit of light by saying, 'Alex, if you thought someone broke in at night, would you put your leg on?' or 'If you were sent to prison, how would you cope without your prosthetics?' We began to find ways to talk about it. That ability came out of necessity."

When probed further, the father of two says he can't pinpoint the moment he began crafting more serious topics into his comedy. Instead, he believes that if your intention is to create joy, you'll find a way to toe the line.

"What's great about comedy is that you can cheer people up, you can take tension out of a harsh situation and you can make it OK for people to talk about things, for example, disability. I think that's why, as human beings, we develop a sense of humour - sometimes you need to laugh and get out of a dark headspace."

Although the comedian will continue to present The Last Leg in 2019, it appears he will be spending a lot more time down under as his wife, Ali McGregor, wants to raise their family in her home town in Melbourne. For Hills, it seems, home is wherever he decides to lay his hat.

"My wife and kids are going to move back to Australia, but then I'm going to come back [to London] whenever we're filming The Last Leg, which is usually ten weeks at a time. In a way, I don't feel like I'm moving back; they're moving back and I'll commute to see them," he laughed.

"My dad worked for Qantas [Airlines] so he was away a lot, so having a dad that was on the other side of the planet wasn't a big deal for me as a kid and I think my kids are used to it as well now. I just need to make sure that, when I'm home, I'm home properly and spending quality time with them."

Sadly, Hills' father passed away in 2012 from cancer, but the influence he had on his son's parenting is apparent, especially when it comes to his love of comedy. As a child, Adam would come home from school to listen to Peter Sellers and Alan Sherman records and watch comedy shows with his dad.

In fact, according to his memoir Best Foot Forward, it was during a Qantas flight that the then eight-year-old saw comedian Victor Borge do a routine that opened his eyes to the world of standup. Before long, Hills was performing in the playground, quoting full comedy routines word for word - a talent that appears to be in the genes.

"I showed [my kids] some comedy videos and, in particular, my five-year-old really loved them. There was a Saturday Night Live sketch with John Belushi making cheeseburgers and, basically, she and I have started doing the sketch. We'll be sitting in the car driving and she'll say 'Daddy, let's do cheeseburger!'

"My eldest daughter has a different kind of comedy sensibility," he mused. "She's a bit more diligent and thoughtful, a bit more studious in her jokes. She'll craft a joke, whereas the five-year-old is happy to jump on board and do sketches."

Can the award-winning stand-up see his girls following in his footsteps? "My eldest wants to be a rockstar/detective and the youngest wants to be a fairy/unicorn/mum/actress - I'm not going to hold them back on that."

As for his own comedy stylings, Adam plans to bring an air of spontaneity to Kilkenny - something that has led him to a series of unusual events at past gigs, including a mock fight with John Kavanaugh whereby the MMA coach pulled the stand-up's prosthetic off to beat him over the head with.

Personally, though, our favourite moment was one that the comedian has somehow forgotten whereby he dared an audience member to come onstage for a joint striptease involving a Snack bar.

"I had forgotten all about that," he laughed. "It's like I become a different person on stage. It's like that film Primal Fear where Edward Norton goes into a rage and has a different personality but, after, he claims he can't remember it. When I'm on stage I do stuff like that and then forget about it - you're like Richard Gere reminding me..."

The Cat Laughs Festival takes place in Kilkenny from May 30th - June 1st - you can see the line-up and buy your tickets here. 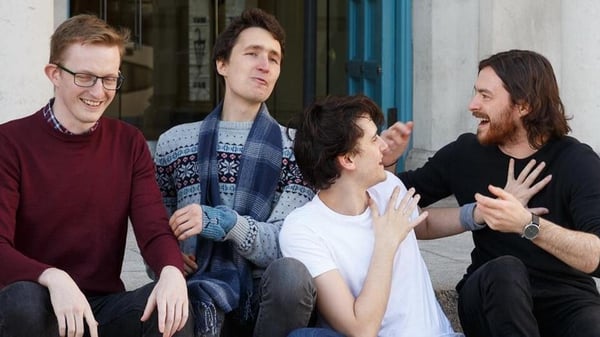