Director and cameraman Marcus Robinson writes for Culture about his film Peter Rice: An Engineer Imagines, a portrait of the legendary engineer, which receives its Irish TV premiere on RTÉ One on May 9th at 10.15pm.

At many times throughout his life, Peter Rice was approached to write a book about his work. There is something painfully ironic about the fact that it was only when he became ill that he found the time to share his seminal thoughts about design and engineering with the world. He completed the work shortly before his death in 1992 and perhaps because of this, An Engineer Imagines is a soaring and inspiring testament to Rice's life and work, containing the essential spirit of the creative and engineering genius of the man.

I am drawn to tell Peter’s story for a number of reasons. When I put down his book, I was amazed that someone who had such a pivotal role in the conception and construction of some of the world’s most iconic buildings was a name totally unknown to me. I want to play my own small part in putting that anomaly right. While Peter was in no way perceived as an underdog; in his world of expertise, the fact that he was not in the limelight like his celebrity architect collaborators compels me to wish to explore his 'Zen, beginner's mind' on film, which is at the core of the true artistic process.

There is an obvious direct connection between this film and my latest work, Rebuilding The Tower, which told the story of the construction of the World Trade Centre site after 9/11. Both films concern themselves with the construction of iconic buildings and are complemented by time-lapse photography to give them the visual majesty and authority they deserve in order to be fully appreciated within their built environment. However, there is an added connection too in that I was immediately enthralled by Peter’s story as I saw in it an opportunity to explore the creative process itself, something I have experienced first hand on my own journey from architectural photographer to filmmaker.

There are some very beautiful and striking visual parallels between the way Peter was as a human being and the way some of his most celebrated designs came into being. By all accounts, particularly in respect to the team who designed the Pompidou Centre, he was a connector. It was his spirit, his human qualities that were the gel; that held the team together and allowed the ideas to come to fruition. This essence of connection is beautifully manifest in the vibrant and living structural perfection of Centre Pompidou - turning complex structural engineering formula and concepts into shapes that today stand the test of time. It is through his buildings that we will understand the man - whether adapting nature’s patterns to build flexible structures, or through creating new experiences through his use of light in buildings.

Rice transformed how we use and view modern multi-purpose structures in our daily lives; be they the Gare TGV at Roissy that we pass through on a train journey, the departure and arrival experience at Stansted Airport or the concert attended at the Sydney Opera House, they are all are imbued with a sense of life that mirror the environment we inhabit and act as metaphors for life - that our time on earth is one surrounded by nature and that in the end, all that mankind can leave is an impression.

Peter Rice: An Engineer Imagines, RTÉ One, Thursday May 9th at 10.15pm. 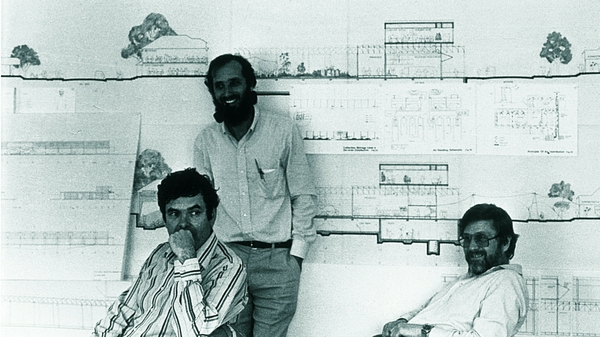