We're delighted to present an extract from The Man Who Was Never Knocked Down: The Life of Boxer Seán Mannion, a new biography from author Rónán Mac Con Iomaire.

Seán Mannion was once ranked the #1 US light middleweight boxer and in 1984 he fought Mike McCallum for the world title, only to fall just short of his dreams. Featuring exclusive interviews with Mannion, this book provides an inside perspective on his boxing career, 1980s Boston, and his present search for purpose outside the ring.

Listen to Documentary On One: Never Knocked Down here.

Seán Mannion’s boxing career had begun to develop a worrying pattern. Win after win after win, resulting in a high-profile fight that he would then lose. For Seán, the fights that he won were no more than stepping stones. But the fights he lost were devastating. Not just to his boxing record, to his confidence, to his love of the sport, but more significantly to his chances of a world title shot.

The huge gains he made by winning against the likes of the high-ranking Nino Gonzalez were wiped out by his loss to Gary Guiden, sliding back down again to the bottom rungs of the boxing ladder. Back again to small money bouts in small halls in front of small crowds. From Caesars Palace to the Memorial Hall, Plymouth, Massachusetts, in the space of two fights. Knowing after the Guiden fight that a cut to the eye was what had stood between him and a title shot only made matters worse.

By this stage of his career, it was becoming more and more of a challenge for Mannion to stay under the 147 pound limit of the welterweight division and his next two fights would prove as much. He just about made weight to beat Argentina’s Ricardo Camoranesi, but the following fight against Hector Figueroa, which would be his last at welterweight, wasn’t quite as straightforward.

"Back in those days, you weighed in on the day of the fight," said Tony Cardinale, "and if Seán did what he was supposed to, he’d be fine. He would leave the gym on target but he had a problem keeping the weight off, and by the time the fight came around, he could be well over."

For Mannion, this particular fight was about unfinished business. Hector "Papo" Figueroa had been Seán’s first and only drawn fight, with the Connemara man strongly of the opinion that he had been the better fighter on the night. Now, he would have the opportunity to prove it.

Mannion and Figueroa had top billing that night and two hours before the fight, Seán left his Plymouth hotel and headed for the weigh-in in the Memorial Hall. The cutoff for welterweights was 147 pounds, although for this fight, another pound had been written into the contract for some much-needed flexibility. When Figueroa stood on the scale, the needle eventually settled at 143 pounds. When it was Seán’s turn, he took off his robe and handed it to Tony Cardinale. He stood on the scale. 156 pounds. A massive nine pounds overweight.

Willie Pep, Papo Figueroa’s manager, chuckled. He had seen this often enough through the years to know that it meant only one thing.

Willie Pep had been the greatest featherweight boxer the world had ever seen. So graceful, so light on his feet that he was christened "Will o’the Wisp." The boxing journalist, Jimmy Cannon, wrote of him: "Sometimes there seemed to be music playing for him and he danced to his private orchestra and the ring became a ballroom."

In 1946, Pep laid a bet with another writer that he could win a round against Jackie Graves without throwing a single punch.

"For three minutes Pep moved, taunted, twirled, tied up Graves—but never threw a punch," wrote Don Riley, . "It was an outstanding display of defensive boxing so adroit, so cunning, so subtle, the 8,000 roaring fans did not notice Pep’s tactics were completely without offense."

The judges didn’t notice either and Pep was awarded the round!

But the Willie Pep in the Memorial Hall in southern Massachusetts on August 20, 1982 was in no mood for dancing.

"The fight is off, guys. Give us the money."

Tony Cardinale looked over at the Massachusetts State Boxing Commission official. Tommy Rawson just shrugged his shoulders. There wasn’t much he could do about the situation. Rawson was Harvard’s boxing coach and he and Cardinale knew each other well.

"Tommy, can we at least try to get the weight off?

"Sure thing. I’ve never seen that kind of weight shifted before, but you can give it a shot"

Cardinale looked over at the guy who had just come down off the scales.

"Well, the fight is on at seven so that’s a little under two hours from now. I’ll give you up to half an hour before it starts. If the weight’s not off by then, you have to forfeit."

Jimmy Connolly stayed in the hall to take care of his other fighters while Cardinale and Mannion headed back to the hotel. When they got to the room, Cardinale went into the bathroom and filled the bath and sink with hot water. By the time Seán walked in, Cardinale was already perspiring heavily from the steam. Mannion had pulled on his heavy rubber suit, used for emergency weight loss, and had taken out his skipping rope. Between the rubber suit, the hot steam and the skipping, it wasn’t long before Seán was soaked in sweat.

An hour later, exhausted from the skipping, Mannion headed back to the hall with Cardinale. Figueroa and Pep watched as he climbed up on the scale. 152 pounds, announced the needle. While he had managed to lose four pounds in an hour, it was still only half of what he needed to lose. Cardinale looked at him.

"You want to keep trying, Seán?"

By this time, with the first fight of the night about to start, the weighing scale had been moved to a corridor being used by fight fans who were heading in to the auditorium. None of them who saw Mannion get off the scale realised that the night’s star attraction was four pounds overweight and too heavy to be allowed into the ring against his opponent.

With the fight about to start in an hour, it was too late to return to the hotel. Seán put his rubber suit back on and went looking for stairs. He found them in one of the back

corridors. Three flights up, three flights down. And so he began. Up, down. The sweat spilling off him. Up, down. His breath rattling from his lungs. Up, down. After half an hour, he heard Cardinale call.

Seán took off the rubber suit and towelled down, standing up on the scale as curious fans walked by, wondering what the hell was going on half an hour out from the big fight. Seán Mannion, Tony Cardinale, Papo Figueroa, Willie Pep, Tommy Rawson watched as the needle on the scales began to rise in seeming slow-motion. Eventually, it began to settle. It stopped. 149 pounds.

"Great stuff," said Cardinale, "we have a fight."

"For fuck sake, Willie, it’s only one fuckin’ pound."

"This is fucking ridiculous. One fucking pound. Do us a favor, Willie. One pound, goddamn it."

"Tony, I’m going to give you another 15 minutes. Take your guy into the changing rooms, give him a rough rubdown, no oil, no nothing, and come back here for one last try."

"A raw massage? You think that’s going to make a difference?"

"Just give it a try. It’s not going to be soothing but I’ve seen it work before."

Tony Cardinale went into the dressing room with Seán. For 15 minutes, he gave Mannion a rubdown, his dry hands burning skin and pulling hair. By the time they had finished, Seán’s body looked as red as the lobsters being served in downtown Plymouth’s seafood restaurants.

They walked out towards the weighing scales, a blanket draped around Seán’s shoulders. Pep and Papo were waiting. Tommy Rawson looked at his watch. Dropping the blanket, Seán stood stark naked on the scales. In an effort to save every ounce of weight, he had left his underwear in the changing room. Mannion still remembers some women screaming as they walked by into the auditorium, witnessing the naked welterweight wannabe. Cardinale, Rawson and Pep crowded around the scale. They looked down. 148.

Still on the scale, Mannion looked into Papo Figueroa’s eyes.

They got into the ring shortly afterwards. Seán Mannion had lost eight pounds in two hours in one of the most intense training sessions of his life. Still, he knew that this fight would only have the one result. Papo Figueroa seemed to know it too. He destroyed Figueroa in the first round but when he had the opportunity to finish him, he let him off. This is how the fight would play out for the next nine rounds. Seán beating Figueroa convincingly but not dropping him. Like a playful cat refusing mercy to a mouse. When it came to the final round, Seán went out, fury still in his blood, and knocked Papo. To show that he could.

Three weeks later, he was back in the ring as a light middleweight, never to return to the constant struggle of making welterweight. The ring was in Scranton, Pennsylvania, and he was up against a local fighter called Steve Michalerya. Mannion had little to fear from Michalerya, a man who had lost 11 of his 27 pro fights. Although the bout was tougher than he had anticipated, Seán turned to his corner, confident of victory, when the ten rounds were in.

The crowd seemed to be of the same opinion, as were the newspapers the following day. Everyone, it seemed, but the judges. When the referee brought the two into the center of

the ring, it was Michalerya’s arm, not Mannion’s, that he lifted into the air. For Seán, the blow was worse than any Michalerya had managed to land in the 10 rounds previous.

Tumbling down that ladder again. But this time, it was different. Seán didn’t realise it at the time but being beaten by Steve Michalerya was the best thing that could have happened to his boxing career. 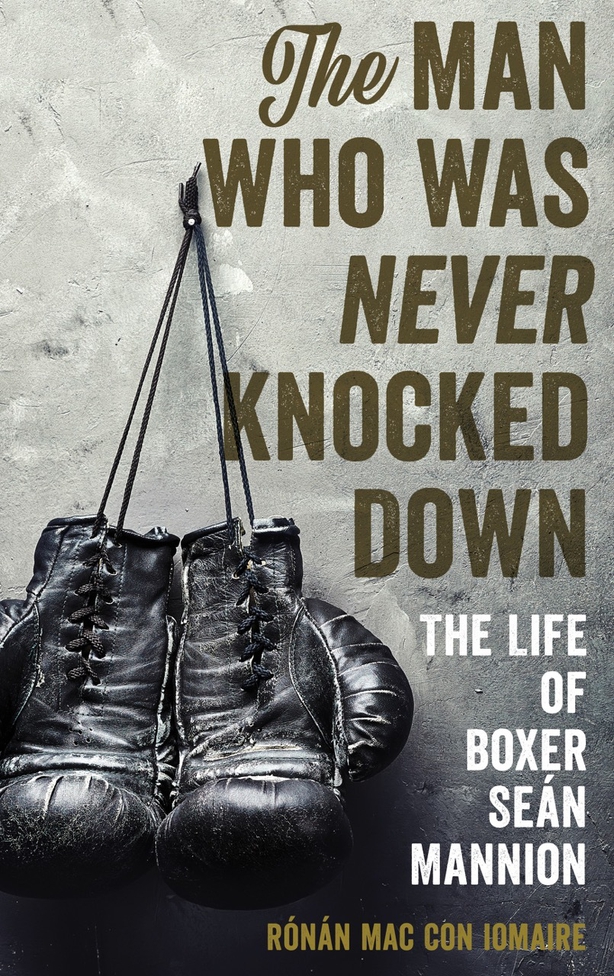 The Man Who Was Never Knocked Down – The Life of Boxer Seán Mannion by Rónán Mac Con Iomaire, published by Rowman and Littlefield, is in bookshops now.