The Dublin-born London-based artist Eva Rothschild is set to make a new outdoor sculpture "on a monumental scale" at The Central Bank's new Docklands Campus location in Dublin.

The piece, entitled A Double Rainbow, will be "open and inviting" according to Rothschild, offering a visual and physical representation of the Bank's ambition to develop "a more social and transparent outlook."

Known for her snake-like, striped metal tube installations, Rothschild makes visually distinctive, generally abstract or geometrical sculptural works that sit outdoors or in and are constructed from concrete, leather, resin, fabric, plaster and metal. They are intended to make us think about how we interact physically, psychologically and emotionally with the spaces around us. They are social as much as visual interventions, inviting conversation, relaxation and more than anything, play.

One of Rothschild's most distinctive works to date is a video piece in which a group of school children destroy an exhibition of her sculptures at Whitechapel Gallery in London in 2012. The premise for the video is the very antithesis of the standard gallery "Do Not Touch!" warning. - you can watch a teaser here:

Ireland has a chequered history of commissioning public sculpture and a complicated record in walking the line between artistic intent, public interaction and the needs, requirement and ambitions of the commissioner - see this 1998 report from the RTE Archives on Eilís O'Connell's Great Wall of Kinsale.

Her temporary public sculpture Someone and Someone was installed in Merrion Square as part of the Vestibule project in 2014.

Throw back to #EvaRothschild Someone and Someone installation at Merrion Square as part of #Vestibule in 2014. See how it sat with the street furniture/public infrastructure of the space? pic.twitter.com/t6uAjpKgIn

A Double Rainbow promises to be a landmark piece for Dublin Docklands.

In the meantime, if you are in Australia, you have until 25 November to catch her major retrospective show, Kosmos, at the Australian Centre for Contemporary Art in Melbourne, which features new sculptures alongside work from the past ten years.

Next year, Rothschild will represent Ireland at the 2019 Venice Biennale. 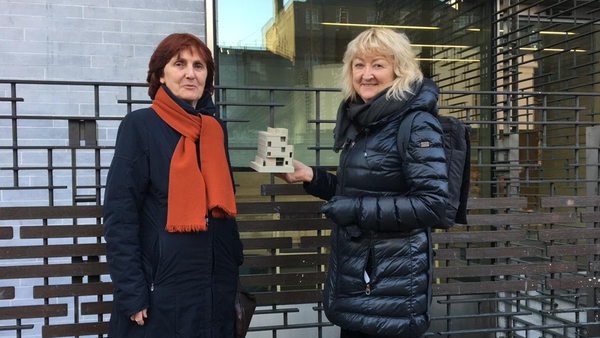