We're delighted to present an extract from Tucked Away, a new short story from Truth & Dare: Stories about Women Who Shaped Ireland by Martina Devlin.

Jane, Lady Wilde – who wrote as Speranza – was Oscar Wilde’s mother. She was a nationalist poet, journalist and essayist, as well as an early supporter of women’s rights. This story takes place in London in 1895 shortly after Oscar is jailed for gross indecency.

"Oscar’s reaping the consequences of his own arrogance, Mama," says Willie Wilde.

Speranza stiffens with reproach. "Where’s your sense of charity? Your brother was too trusting. He was undone by malice."

"Oscar was bloated with vanity and conceit. Prison will purify him."

"Purify him? It will kill him! Shame on you for dismissing your own flesh and blood. Especially in his hour of need. Let others say what they like about Oscar, his family must always defend him. The Wilde name is an honourable one."

Willie blinks. Why must Mama persist in speaking in italics? "You’re rewriting history, Mama. You know perfectly well our father dragged the Wilde name through the muck long before Oscar took his turn."

A howl, rooted in outrage, gushes from her. She cannot accept the idea that she coupled her life to a man unworthy of Speranza, heroine of the Young Irelanders’ movement. Her pen denounced injustice. Her ballads were sung on the streets. Her poetry fired Irishmen and women’s souls. She provoked Dublin Castle into shutting down the newspaper that published her. The Nation’s editor was put on trial because of one of her editorials.

"Mama, I’m sorry, truly I am. I didn’t mean to cause you pain. Let me fetch you a handkerchief. Where are they? In the drawer?"

She flaps him away and rummages for a scrap of linen under her pillows, a dangling earring catching in her grey plait. She can’t have him ferreting about. He’s capable of pocketing anything that takes his eye. Mopping at her face, she gestures towards the door, and he backs away. There are days when she itches to tell him to leave for good. Willie possesses an ace, however: his six-month-old daughter, Dorothy. She can never throw him out now that Lily and Dorothy are living under her roof.

Jane listens to his footsteps taking the stairs three at a time. At seventy-four, her hearing is acute. Perhaps it has been sharpened by her habit of lying in bed by candlelit: "glooming" Willie calls

it. Ghosts flit among the shadows but she can live with them. She won’t even agree to gaslight. It’s a brutality, the way it floods people’s faces.

Household sounds sail up. The maid bangs the dustbin lid in the back yard. Dorothy grizzles. Willie’s voice rumbles, followed by Lily’s response. Their conversation transfers to the hall. The front door slams shut.

She gropes for the envelope and turns it over, as if to gauge its substance by touch, like a fairground medium. The prison stamp tells her it is the response to her appeal to the governor of Reading Gaol. She wrote to him herself, despite the pain in her fingers, knotted into unlovely shapes by arthritis. Grant a dying mother this one boon, I entreat you. Her exuberant penmanship dominated the page, asking that Oscar should be allowed out of prison to visit her, at home. For an hour, a quarter-hour, five minutes – for as short a term as you decree. The request does not strike her as unreasonable. After all, she hasn’t long to live. The governor must take this into consideration.

Willie said she was asking for the sun, moon and stars. "Oscar’s a convicted felon." A vulgar observation, she felt. He told her to apply for permission to pay a prison visit to Reading. She tried to explain she was unfit for the journey. That she’d gasp out her last breath en route. Imagine dying in a railway carriage at Paddington Station! How would that be a fitting end for Speranza?

Boots clatter outside her door. Willie is back, short of breath. "Damn nuisance. Just been collared by a tradesman. Waved the bill for Dorothy’s perambulator under my nose, in full view of the neighbours. Persistent sort, raised the devil of a row. I had to tell him to wait. Be obliged if you could advance me something to settle it, Mama."

"I have nothing to give you, Willie. I’m not due another pension cheque until March."

She sees the whip of temper crack in his eyes. He doesn’t believe her.

"Your brother is a bankrupt. And you know where he is compelled to spend his days." Jane delivers a chilling stare, hoping to shame Willie.

"Even in the clink, Oscar can raise cash," says Willie. "He knows the right sort. His friends have deep pockets. Touch him for a loan."

"I hope you are not going to prove shallow, Willie. Shallowness is a singularly unattractive vice. You are a husband and father now, with Lily and Dorothy to consider."

He hoots, as if she has cracked a capital joke. "I hope you are not going to lecture me, Mama. It’s not as if you know much about the ideal husband."

"You will not mock your papa!"

"How else is one to deal with him?" Seething, she retreats into silence. Willie sees he has overstepped the mark, which won’t get the

shopkeeper off his back. "Mama, don’t let’s fight. Lily can’t take Dorothy out for air if the perambulator is impounded. Babies need air."

The air separating them bristles. "Go outside. Wait until I call you."  When she is alone, she extracts one of the sovereigns from the cloth bag inside her nightgown. At this rate, there’ll be nothing left to bury her.

How she resents Willie for reminding her that William was far from being the husband she anticipated. When he proposed, he painted an irresistible portrait of their life together. They would be an unstoppable force! But William had a secret vice. He could not control his passion for women – lowborn females in particular. It led to certain repercussions. Shortly before their wedding day, he knelt before her as a humble petitioner and confessed all. At least, he suggested it was all but possibly it was the tip of the iceberg.

"Very well, Willie." She extends a plump fist, fingers closed over the sovereign.

His eyes gleam. He advances, holding out his hand, palm upwards.

With a flick of the wrist, she drops the coin into it. "That’s all there is. I want a receipt." 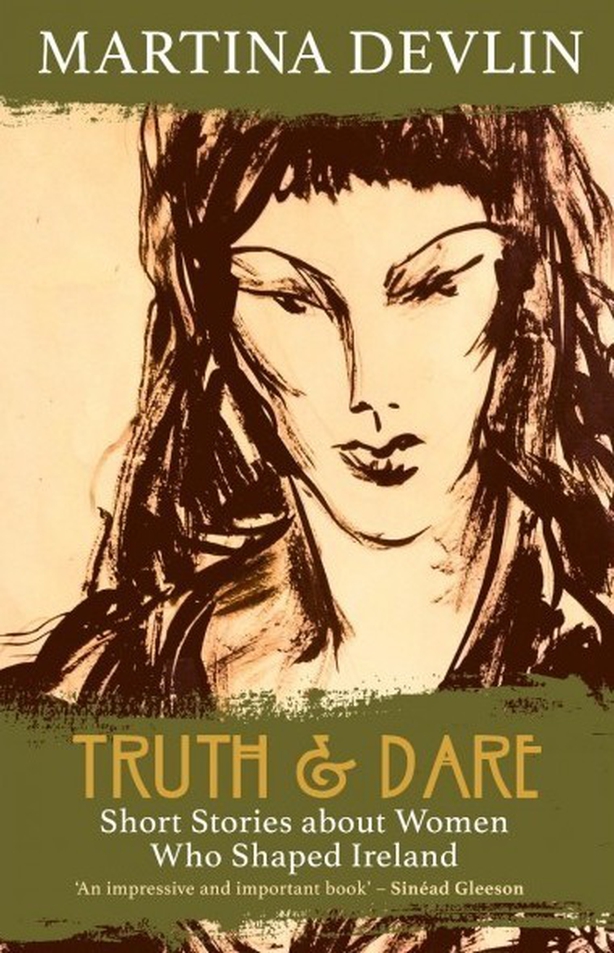 Truth & Dare: Short Stories about Women Who Shaped Ireland by Martina Devlin is published by Poolbeg