Taking a deeper dive into this year's shortlist for The An Post Irish Book Awards, the one thing that becomes very apparent is that the Irish publishing industry is in something resembling rude health.

Go here to cast your vote in this year's An Post Irish Book Awards...

On a category by category basis, choosing a clear winner is a nigh-upon-impossible task. We suggest you do a deeper dive by reading as many of the shortlisted titles as possible, and cast your vote wisely.

Below, we break down the categories for your bookish benefit...

This category offers a splendid showcase for the array of diverse and fascinating non-fiction titles coming from Irish publishing houses these days, from colourful (and educational) children's entries like The Great Irish Weather Book and Blazing A Trail - Irish Women Who Changed the World to Professor Luke O'Neill 's fascinating journey across centuries and galaxies, Humanology.

We've been knocking it out of the park on the children's book front for the past few years; this time out, new kids on the block like Ryan Tubridy and Niall 'Bressie' Breslin face off against kids' faves Peter Donnelly (with a sequel to his much-loved The President's Glasses) and Oliver Jeffers...

What a great year for children's books! Educational (and fun) entries from Dara Ó Briain and Sarah Webb hold their own alongside literary superstar Eoin Colfer and emerging talents like Catherine Doyle.

Don't make the mistake of thinking that the books in this category are only to be enjoyed by YA readers; talented authors like Dave Rudden, Sarah Maria Griffin and Louise O'Neill should be read by everyone.

The Weight of a Thousand Feathers – Brian Conaghan (Bloomsbury)

While Anna Burns already scooped the Booker Prize, there's a wealth of literary riches in this most hotly-contested of categories, and don't count out Sally Rooney and Donal Ryan, both of whom made the Booker longlist. All in, a vintage year for Irish literary fiction...

From a Low and Quiet Sea – Donal Ryan (Doubleday Ireland)

A Ladder to the Sky – John Boyne (Doubleday)

We're not quite sure what constitutes 'popular' fiction these days either, but with a line-up that includes everyone from Graham Norton and Aisling duo Emer McLysaght and Sarah Breen to previous winner Ross O'Carroll-Kelly and the late Emma Hannigan, who cares?

The crime fiction renaissance continues - it's great to see emerging Irish talents like Dervla McTiernan and Andrea Mara sharing the stage with heavy-hitters like Liz Nugent and Jo Spain.

Onside Non-Fiction Book of the Year

Ireland AM Popular Non- Fiction Book of the Year

From true talls tales (Tony 10) and celebrity tell-alls (Play It Again Des and Born for the Road) to vivid memoirs (The Cow Book), we love the sheer diversity of talent celebrated in this category.

Born for the Road: My Story So Far – Nathan Carter (Penguin Ireland)

EUROSPAR Cookbook of the Year

How to Eat a Peach – Diana Henry (Mitchell Beazley)

Irish sporting heroes abound in this category, with a strong showing on the GAA front...

At All Costs – Davy Fitzgerald with Vincent Hogan (Gill Books)

Listeners to RTÉ Radio 1's Ryan Tubridy Show get to pick the winner in this fiercely contested category - cast your vote here. (NB: It should be noted that there's one former US President, one former Irish President, and a book about the President's Cat in this year's shortlist - if you're in any way Presidental, you're apparently a shoo-in...)

The President is Missing – Bill Clinton and James Patterson (Century)

The Woman in the Window – A.J. Finn (HarperCollins)

The annual Listowel bash provides a vivid showcase for emerging literary talents - this category is a great place to spot future poetry superstars, and lie to your friends that you've been reading them for years.

Writing.ie Short Story of the Year

This enjoyably eclectic category mixes selections from essential short story journals like The Dublin Review and Granta with entries from short story collections by the likes of Cecelia Ahern and Mia Gallagher.

The Love Leabhar Gaeilge Irish Language Book of the Year

A welcome addition to this year's nominations is a category exclusively devoted to Irish language publications, enjoying a serious renaissance at present.

In addition to the category winners, two additional special awards will also be announced in November, prior to the Irish Book Awards bash on 27th November: The Bob Hughes Lifetime Achievement Award, which recognises the contribution of distinguished Irish writers and poets, and the International Recognition Award, a special award made to international authors who have contributed substantially to the health and wealth of the Irish book-trade. Now what are you waiting for? Get reading!

The An Post Irish Book Awards 2018 take place on 27th November, with the highlights to be broadcast on RTÉ One on 29th November - find out more (and cast your vote) here. 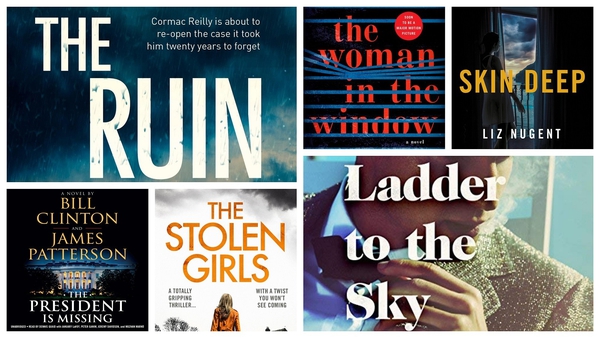