Playwright and performer Donal O'Kelly writes for Culture about the genesis of his classic play Bat The Father Rabbit The Son, which embarks on its 30th anniversary tour this week.

I remember the day the sod was cut on the IFSC site down in Dublin docklands. Charlie Haughey wielded the shovel like a weapon on the throat of poverty. He shoved it in. He killed the monster. He looked up and grinned. The photographers snapped. On the RTE 6 O’Clock News, Charlie Haughey claimed credit for this great boon to the Irish economy. That was more than thirty years ago.

Ten years ago, we had the bank bailout. We have been paying 43% of European bank debt since then. That’s because we the Irish people, 1% of the EU population, through our political leadership, willingly and knowingly
acted like a leaky bucket for international bondholders to launder their ill-gotten gains through the IFSC specially-constructed fiscal turbines, gulley-gulley-wash-wash ging-gang-goo gulley-wash gulley-wash-wash
staying down low beneath the gaze of pernickity regulatory ticks-and-tax-tockery that only slows things down and keeps us stuck in the backlands a laughing stock of the neo-capitalist whizz-kids who told us there was no way this IFSC brainwave could possibly go wrong.

Rabbit nearly wet himself with excitement watching that blade cut through the clay that day in 1987 down docklands way.

I know the price of success. The price!? I know
the smell of success!
I know the value of cash! Converted!
And land! Rezoned!
And dwellings! Deslated!
And assets! Stripped!
And friends! Well placed!
And favours! Returned!
And art! On – my – wall!
Value! Valuation! Punts! Dollars! F**king yens!
International banking centres!
Now I’m feeling better! Much improved!

I don’t know where Rabbit sprang from. I wrote him as a character based on hundreds I saw in loud pinstripe suits running Dublin in the 80s. The self-made men who, instead of recognizing the obstacles they overcame and working out ways of reducing them for others, pretended their success proved no such class obstacles existed. What made grocer’s daughter Margaret Thatcher a political success! They gloried in a free market system that has always accommodated people like them as exceptions that prove the rules of wealth accumulation based on ripping off the weak. And the weak are rendered continually weakened by a relentless violence inflicted on them in such a normalized way that it’s facilitated to present itself as just-the-way-things-are-since-time-immemorial.

Luckily, many people have always been moved to find better ways of arranging ourselves collectively. Rabbit’s
father Bat and mother Mamie were in that category. Seekers of dreams.

When I came back from Nicaragua in 1987, I had the bones of Bat The Father Rabbit The Son written. Rough Magic agreed to produce it, Declan Hughes directed, Bobby Ballagh designed a fabulous aluminium table-and-chair set that I’ve used for two other solo shows since then, and the whole thing premiered in a glorious frenzy of mental tension in the Mansion House for the 1988 Dublin Theatre Festival. A few nights later, I noticed black-and-blue marks on the insides of both biceps. They were from hugging the legs of the upside-down table for the last rapid-fire duologue between Bat and Rabbit in a punt in Dublin Bay, as the show built to its climactic crescendo.

Thirty years later, I’m doing it all again. And it doesn’t feel like a nostalgia trip. The bank bailout and our deliberate impoverishment as a citizenry is rooted in the mindset of that 80s generation – the sons of the
founding fathers of the state. If there had been space given to the founding mothers, we might not have been ripped off so totally. I’m glad I’ll be telling the story again in thirty venues to mark the thirtieth anniversary
of the premiere and transfer to New York of Bat The Father Rabbit The Son.

The 30th anniversary tour of Bat The Father Rabbit The Son kicks off at the Hawkswell, Sligo on Wednesday 24th October - find a date near you here. 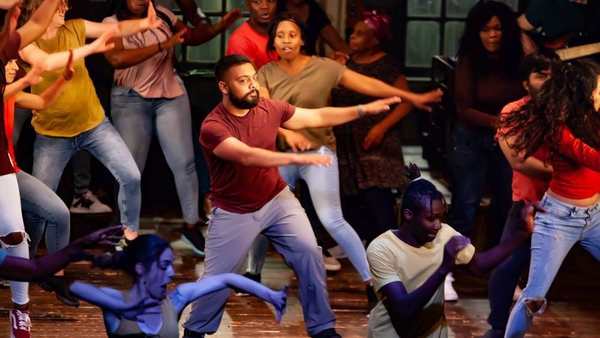