After last year's sell-out tour of pubs across Ireland, the Abbey Theatre’s Two Pints by Roddy Doyle is back for another round, stopping off at pubs in Ireland and the UK. Director Caitriona McLaughlin writes for Culture about 'bringing a slice of Dublin to towns and villages around Ireland - and not the other way around'.

When (Abbey Artistic Directors) Neil and Graham asked me to direct Roddy Doyle’s new play Two Pints, and tour it to pubs around Ireland, I was thrilled. As someone who has made theatre in an array of found and site-sympathetic spaces, including pubs, shops, piers, beneath flyovers, and one time inside a desanctified church, putting theatre on in pubs around Ireland felt like a sort of homecoming. I suspect every theatre director based outside of Dublin has had a production of some sort or another perform in a pub, so why did this feel different?

Was it the fact that we were asking two of Irelands leading actors to perform in such close and intimate surroundings?

Was it the fact that we were bringing a slice of Dublin to towns and villages around Ireland - and not the other way around?

Perhaps it was that we were bringing a new Roddy Doyle play directly into the location it was set, a pub, before putting it on a stage?

Or was it simply the fact that our National Theatre had finally realised that it had an audience and future theatre artists often living 3 or 4 hours away in parts of the country lacking in basic public transport or access to live theatre, particularly new plays written and performed by exceptional theatre artists?

Roddy is not only teaching those of us in the theatre how to write characters for a more informed and respectful world. He is showing us that empathy is created by listening.

We wanted the experience for rural Irish audiences seeing this play in such a small and intimate spaces to be like seeing the Sex Pistols at the 100 club, or at Manchester Free Trade Hall, before the rest of the country knew what was going on. We wanted them to be the first, and to give them the sense of being let in on a secret, before anyone else, as opposed to being the last. It was a very punk aesthetic. I just loved that idea. And hence, the Two Pints tour was born.

When you get hold of a play like Two Pints you know fairly quickly you have something special on your hands. Before reading the script I admit I was thinking, two men sitting at a bar talking about life and themselves, what’s new? As it turns out: everything. With this masterful piece of writing  Roddy Doyle teaches us an old lesson that we have perhaps lost sight of in contemporary drama: plays are about the people we live with. He has written a play that is utterly true to the banter you might hear between any two men in their 60’s sitting in the pub, and yet, it never once dips into any kind of bigoted, judgmental or sexist remark.

Roddy is not only teaching those of us in the theatre how to write characters for a more informed and respectful world. He is showing us that empathy is created by listening. What he allows us to do is eavesdrop on the hopes, fears, desires, and disappointments of two simple, but in their own way, extraordinary men. Yes, the language is colourful. Yes, there are a few four letter words. But there is also much laughter, much love, much comedy, and much life too. I hope you get to eavesdrop on these two men. Like great jazz musicians, they riff off each other, and off their own experiences.

And as I sit here in a hotel bar wondering have I said too much or not enough in writing this, the conversation of two men at the bar floats into earshot:-

"One:  He’s mad for the ambiance, that’s what they used to call it anyway, ambience!

One:  Fucking sharks, where’s it going

Two:  Jesus Christ! I told you what I know!"

…and I am struck once again by the accuracy and brilliance of Roddy’s writing.

Directed by Caitríona McLaughlin, Two Pints heads back on the road in August and September. The tour kicked off in The Flowing Tide on Lower Abbey Street in Dublin, before performances in Carlow, Louth, Longford, Derry, Newcastle upon Tyne and Sunderland - more details here. 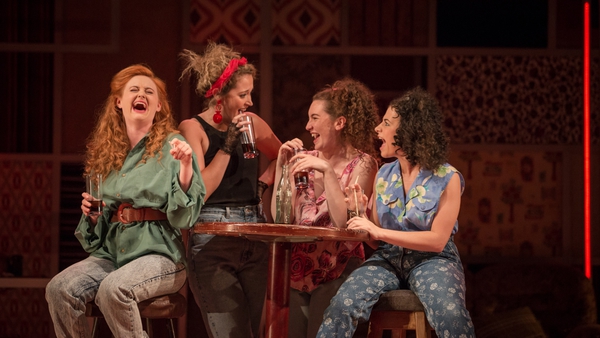 Watch: Roddy Doyle and The Snapper cast in conversation