Playwright Michael West has penned a modern mutation of Mary Shelley's Frankenstein for his new one-man show currently playing on the Abbey Theatre's Peacock stage - here, he deconstructs the DNA of FRNKNSTN.

We call our version of Mary Shelley’s masterpiece a mutation as a play on the workings of DNA, but also as a description of the process of making a piece for stage. T

hough we didn’t know it at the time, this show began a long time ago as a conversation about using the myth of Prometheus as the basis for a one-man show about a mad scientist, but nothing came of it. I read Mary Shelley’s novel some time after that, researching for a play about Artificial Intelligence, but I was mining it for its meditations on hubris while enjoying its gothic furniture; I certainly wasn’t thinking of adapting it. It was over another conversation with Louis, years later, about great titles and what they do to our expectations that the light went on — Frankenstein; or, the modern Prometheus is the full title of Shelley’s book — and we suddenly had a name and a frame for a contemporary take on both myths for a solo performer.

Because we all come to the story of Frankenstein with a rich history of its adaptations and mutations in our heads, we effectively hold multiple drafts of the protagonists up to the light, both illuminating and obscuring their original essence, rendering them unstable and full of shifting colours and contradictory impulses. (Exhibit A: the use of Frankenstein as the name of both the doctor and the monster.) This is the fate of any classic, but it also speaks to something within the novel’s themes.

We felt that the secret to the book’s power was the implicit assumption that the capable, ambitious, creative author contains within herself the dark, neglected, suffering creation.

The key to the book’s ingenious design is its nested narratives: a ship’s captain tells his sister of an unlikely encounter in the Arctic wastes with a Victor Frankenstein, who tells of an unlikely encounter up a mountain with a creature, who tells him how he got there. This creates a series of unreliable narrators, but also situates the creature at the heart of the story and within the story of his maker. This seemed like a good place to start for a one-man show, since any telling of Frankenstein has to confront the challenge of showing this great encounter between scientist and experiment, creator and creature, parent and child.

We felt that the secret to the book’s power was the implicit assumption that the capable, ambitious, creative author contains within herself the dark, neglected, suffering creation. We wanted to blur the lines between those characters and roles and live in that uncertain, shifting borderland even as we were swept along by the narrative. And what a wonderful tale it is: a classic meditation on nature vs nurture, Frankenstein is also a story of thwarted creativity, vaulting ambition, love and, yes, murder.

I’ve long been an admirer of Theatre Lovett and the extraordinary attention to detail and rigorous process that they bring to their work. It’s been a total privilege to share with them the multiple drafts a project goes through from conversations, to text, to readings, to rehearsals and now to performance. The exchange of ideas has been free and invigorating. We hope you enjoy the resulting recombination and mutation.

FRNKNSTN is at the Abbey Theatre, Dublin, until September 1st - more details here. 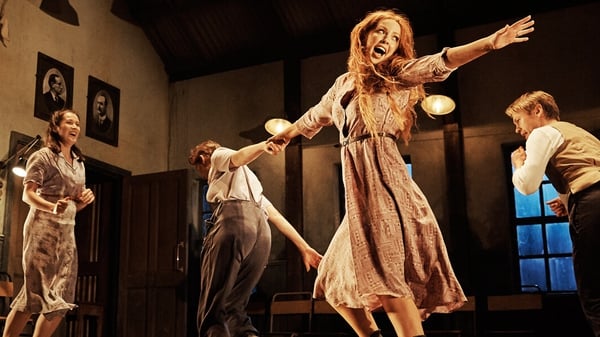