Every week, critic Cristin Leach talks us through a different artwork for Through The Canvas on RTÉ lyric fm - this week, she's taking a closer look at Dorothy Cross's iconic Ghost Ship (2003).

Something unexpected happened when producer Diarmuid McIntyre and I decided we would like to "walk into the world" of Ghost Ship, a temporary public artwork made by Dorothy Cross (born 1956) in 1999. Ghost Ship was anchored Scotsman’s Bay in Dun Laoghaire during February in the final year of the twentieth century.

The day before I was due to meet Diarmuid at the pier, I went to my parents’ house for lunch. "I’m off to Dublin," I told them, "to talk about that lightship Dorothy Cross painted with phosphorescent paint twenty years ago." "I worked on a lightship once," said my dad. This was not something I had ever known about him. He said it was the summer he was twenty years old and he told me tales about doing press ups on the deck during breaks and of dismantling the equipment on board as part of a summer placement he undertook while studying engineering at Bolton St in Dublin. It was the summer of 1969.

My dad remembered the name of that ship, so we Googled it: Albatross. It was the same lightship Cross had painted for her Nissan Art Project thirty years later. What were the odds? And it turned out later that Diarmuid had spent time on this ship too in the 1980s, after it was decommissioned.

Ghost Ship is like one of those concerts more people than could ever possibly have had tickets for claim to have attended. My own memory is fuzzy around whether I ever actually saw it in person. In 1999, I had recently started a new job in Dublin, as an online journalist with RTÉ. My memories of Ghost Ship are indelibly tied up with personal associations about particular time and place: Dublin, when the internet was young and my peer group was setting out on our working lives. It was also a time when installation art of this scale, cost and ambition seemed clever, audacious and apt.

Ghost Ship was selected from artist proposals that came from eight countries to take the £40,000 award, one of the largest visual arts sponsorships at the time. It was painted and anchored in the bay and illuminated to glow and fade in cycles over a three-hour period, and then it was gone. What happens when a piece of art lives on much longer in memory and in documentation than it does in actual fact? Ghost Ship has endured in the public imagination. It also endures in the Irish Museum of Modern Art Collection as a gallery installation set-up: two light ship models, phosphorescent paint, ultraviolet lights and a ten-minute looping video.

Cross was playing homage to the lightships that once marked dangerous reefs around the Irish coast. Manned until 1974, they were replaced by automated electric buoys, decommissioned by engineers like my dad. With Ghost Ship, Cross was also nodding to childhood memories of her own. What happens when we step back in time to encounter those ghosts? Now you see it… 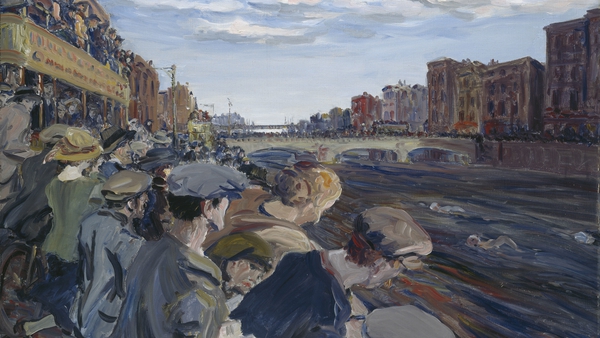