We're delighted to present an exclusive extract from The President Is Missing, the new thriller by President Bill Clinton and James Patterson.

The President is Missing. The world is in shock. But the reason he's missing is much worse than anyone can imagine...

Everything I did was to protect my country. I’d do it again. The problem is, I can’t say any of that.

"All I can tell you is that I have always acted with the security of my country in mind. And I always will."

I see Carolyn in the corner, reading something on her phone, responding. I maintain eye contact in case I need to drop everything and act on it. Something from General Burke at CENTCOM? From the under secretary of defense? From the Imminent Threat Response Team? We have a lot of balls in the air right now, trying to monitor and defend against this threat. The other shoe could drop at any minute. We think—we hope—that we have another day, at least. But the only thing that is certain is that nothing is certain. We have to be ready any minute, right now, in case—

"Is calling the leaders of ISIS protecting our country?"

"What? I say, returning my focus to this hearing. "What are you talking about? I’ve never called the leaders of ISIS. What does ISIS have to do with this?"

Before I’ve completed my answer, I realize what I’ve done. I wish I could reach out and grab the words and stuff them back in my mouth. But it’s too late. He caught me when I was looking the other way.

I blow out air and look over at Carolyn Brock, who maintains that implacable expression, though I can imagine a hint of I-told-ya-so in her narrowed eyes.

"Congressman Kearns, this is a matter of national security. It’s not a game of gotcha. This is serious business. Whenever you’re ready to ask a serious question, I’ll be happy to answer."

"An American died in that fight in Algeria, Mr. President. An American, A CIA operative named Nathan Cromartie, died stopping that anti-Russia militia group from killing Suliman Cindoruk. I think the American people consider that to be serious."

"You’ve heard his mother speak out on this," he says.

I have. We all have. After what happened in Algeria, we disclosed nothing publicly. We couldn’t. But then the militia group published video of a dead American online, and it didn’t take long before Clara Cromartie identified him as her son, Nathan. She outed him as a CIA operative, too. It was one gigantic shitstorm. The media rushed to her, and within hours she was demanding to know why her son had to die to protect a terrorist responsible for the deaths of hundreds of innocent people, including many Americans. In her grief and pain, she practically wrote the script for the select committee hearing.

"Nathan Cromartie was a hero," I say again. "He was a patriot. And he understood as well as anyone that much of what we do in the interest of national security cannot be discussed publicly. I’ve spoken privately to Mrs. Cromartie, and I’m deeply sorry for what happened to her son. Beyond that, I won’t comment. I can’t, and I won’t."

"Well, in hindsight, Mr. President," he says, "do you think maybe your policy of negotiating with terrorists hasn’t worked out so well?"

"I don’t negotiate with terrorists."

"Whatever you want to call it," he says. "Calling them. Hashing things out with them. Coddling them—"

The lights flicker overhead, two quick blinks of interruption. Some groans in response, and Carolyn Brock perks up, writing herself a mental note.

He uses the pause to jump in for another question.

"You’ve made no secret, Mr. President, that you prefer dialogue over shows of force, that you’d rather talk things out with terrorists."

"No," I say, drawing out the word, my pulse throbbing in my temple, because that kind of oversimplification epitomizes everything that’s wrong with our politics, "what I have said repeatedly is that if there is a way to peacefully resolve a situation, the peaceful way is the better way. Engaging is not surrendering. Are we here to have a foreign police debate, Congressman? I’d hate to interrupt this witch hunt with a substantive conversation."

I glance over to the corner of the room, where Carolyn Brock winces, a rare break in her implacable expression.

"Engaging the enemy is one way to put it, Mr. President. Coddling is another way."

"I do not coddle our enemies," I say. "Nor do I renounce the use of force in dealing with them. Force is always an option, but I will not use it unless I deem it necessary. That might be hard to understand for some country club, trust-fund baby, who spent his life chugging beer bongs and paddling pledges in some secret-skull college fraternity and calling everybody by their initials, but I have met the enemy head-on in a battlefield. I will pause before I send our sons and daughters into battle, because I was one of those sons, and I know the risks."

Jenny is leaning forward, wanting more, always wanting me to expound on the details of my military service. Tell them about your tour of duty. Tell them about your time as a POW. Tell them about your injuries, the torture. It was an endless struggle during the campaign, one of the things about me that tested the most favorably. If my advisers had their way, it would have been just about the only thing I ever discussed. But I never gave in. Some things you just don’t talk about.

"No, I’m not finished. I already explained all of this to House leadership, to the Speaker and others. I told you I couldn’t have this hearing. You could have said, ‘Okay, Mr. President, we are patriots, too, and we will respect what you’re doing, even if you can’t tell us everything that’s going on.’ But you didn’t do that, did you? You couldn’t resist the chance to haul me in and score points. So let me say to you publicly what I said to you privately. I will not answer your specific questions about conversations I’ve had or actions I’ve taken, because they are dangerous. They are a threat to our national security. If I have to lose this office to protect this country, I will do it. But make no mistake. I have never taken a single action, or uttered a single word, without the safety and security of the United States foremost in my mind. And I never will."

My questioner is not the least bit deterred by the insults I’ve hurled. He is undoubtedly encouraged by the fact that his questions have now firmly found their place under my skin. He is looking at his notes again, at his flow chart of questions and follow-ups, while I try to calm myself.

"What’s the toughest decision you’ve make this week, Mr. Kearns? Which bow tie to wear to the hearing? Which side to part your hair for that ridiculous combover that isn’t fooling anybody?

"Lately, I spend almost all my time trying to keep this country safe. That requires tough decisions. Sometimes those decisions have to be made when there are many unknowns. Sometimes all the options are flat-out shitty, and I have to choose the least flat-out shitty one. Of course, I wonder if I’ve made the right call, and whether it will work out in the end. So I just do the best I can. And live with it.

"That means I also have to live with the criticism, even when it comes form an opportunistic political hack picking out one move on the chess board without knowing what the rest of the game looks like, then turning that move inside-out without having a single clue how much he might be endangering our nation.

"Mr. Kearns, I’d like to discuss all my actions with you, but there are national security considerations that just don’t permit it. I know you know that, of course. But I also know it’s hard to pass up an easy cheap shot."

In the corner, Danny Ackers has his hands up, signaling for a time-out.

I lash out and whack the microphone off the table. I knock over my chair as I get to my feet. 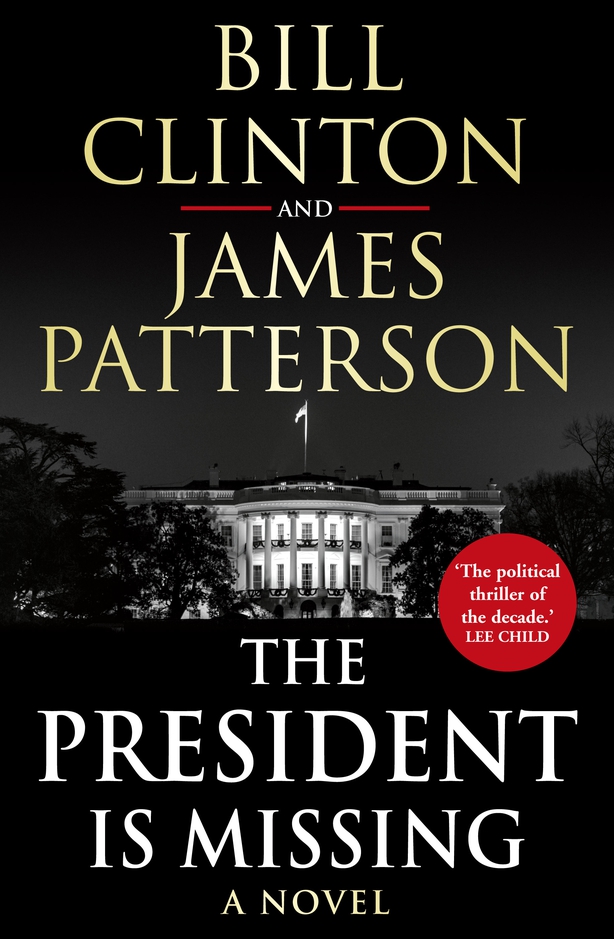 Extracted from The President is Missing by President Bill Clinton and James Patterson, published by Century and in bookshops now.