Paddy Kehoe surveys the best of Georges Simenon, and looks at two further issues in the mammoth 75-book Penguin paperback series of Maigret novels in translation.

The celebrated writer Georges Simenon (1903-1989) wrote 75 Inspector Maigret crime novels and 28 short stories featuring the eponymous commisaire. Simenon’s narratives depended on the sharp powers of perception of his most famous creation, the eponymous police inspector and the  hard existential seed of the stories is somehow not lost in decent English translations.

Shortly before his death, Simenon’s crime fictions were selling 300,000 copies a year in the USA alone. The pipe-smoking Belgian also wrote his so-called his ‘romans durs’, or `hard novels.’ Keen Simenon fans tend to regard these as superior to the Maigret novels, but any ‘Best of’ ranking for decency’s sake should include at least a Maigret or two. There is often a gentle, inoffensive feel to the tales, which may well be the reasons readers like them so much. The most heinous crimes are being committed, but the affable police inspector can still be looking forward to a steaming pot au feu cooked by the loyal missus at home.

In truth, some of the romans durs can be just too hard to bear, and personally I find the amoral despondency  in The Snow was Dirty (La Neige était Sale) just too awful. Similarly, The Man who Watched Trains Go By (L'Homme qui Regardait Passer les Trains) is whimsical criminallity out of control. 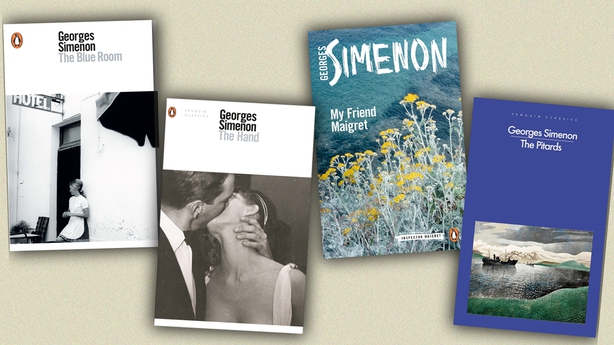 On the other hand, The Blue Room, The Hand and The Mahé Circle – also classed as romans durs - number among the greatest of his many novels. So why are these three more appealing to your writer? Essentially because their troubled male protagonists are not so hell-bent on self-destruction as the characters in The Man who Watched Trains Go By and The Snow is Dirty.  The men may well be up to no good, yet we can at least perceive a certain logic in their self-protective evil-doing. It’s nature red in tooth and claw with the others and it’s just too atrocious, too sensational even.

Tony is married to the gently submissive Gisele and they have a young daughter Marianne, while childless neigbour Andrée is the wife of sickly Nicolas. Residents of the village of St Justine, Tony and Andrée are indulging in a lusty affair at the Hotel des Voyageurs in the nearest big town of Triant. The lovers meet regularly at the Blue Room of the title, with the connivance of Tony’s brother, the hotel owner. One hot August day, the frighteners are truly put on Tony, when through the window of their love nest he sees Nicolas approaching the building. Tony suspects that Nicolas has twigged the torrid affair. Frightened at losing what he has, Tony runs for cover and resists resuming the liaison, as he tries to hide in the camouflage of domestic comfort. This will not be possible, and the affair is fated to be the catalyst for murder.

Simenon lived for a few years at Shadow Rock Farm, in Lakeville, Connecticut in the early 1950s and wrote a number of stories set in the area - indeed, a few  of his Maigret novels are set elsewhere in the USA. The Hand charts with a disorienting sense of menace the fall-out after a drinks party. One Ray Sanders goes missing in a severe snowstorm on the walk home from the party while lawyer Donald Dodd, his wife Isabel and Sanders’ wife Mona make it home safely. Dodd elects to go search for his friend, but is seized by an odd inability to actually do so. Well sozzled after the night’s carousing, he commits a grave, possibly criminal act of neglect. The reason, he concludes, is a sudden, all-consuming fit of sexual jealousy.

So respected is Inspector - or more properly Commisaire - Jules Maigret in the business of detection that Mr Pyke, an officer from Scotland Yard, has arrived in France to study how his Gallic counterpart does the job. Together, the two men together attempt to uncover the secrets of the island of Porquerolles, off the Cote d’Azur. A small-time crook has been murdered on the island, the night after he had enthusiastically proclaimed his friendship with the self-same Maigret in the presence of a large group of the island's residents. The two inspectors leave drably grey Paris for the sparkling Meditterranean to solve the murder. Someone has to do it...

The Pitards is a compelling - and decidedly noir-ish - story of baleful shenanigans at sea from Simenon. Georges Lannec is the Breton owner and captain of a cargo ship; the stubborn seaman is annoyed as he sets off down the river Seine on a voyage to Hamburg, the reason being that his wife Mathilde, nee Pitard, has insisted on accompanying him on the trip. Lannec harbours deep resentments against his wife's family - an odiously ambitious set of bourgeois caricatures. Indeed, the Pitard family has a hold over Lannec, as he has borrowed from them a sizable portion of the cash required to buy the boat.

Hell of a Lot of Crime: Over 800 million Simenon copies sold

'My readings? I read tout Simenon, and when I'm done, I start all over again,' declared the great film-maker Claude Chabrol, who adapted a number of Simenon stories for film. The entire ouevre consists of 391 titles, with 75 books alone featuring Inspector Maigret, translated into more than 50 languages. There are over 800 million Simenon books sold worldwide, and he is the most translated French speaking author of the 20th century - and the second most translated author of all time in Italy, after Shakespeare.

Meanwhile, Maigret’s Doubts (Une Confidence de Maigret) is number 52 in the series of Penguin re-issues and new translations, and is just out. The story was first published in 1959, 27 years after Simenon had introduced his fictional Jules Maigret of the Paris Police Judiciaire to readers. The chief executive of a pharmaceutical company has thrived in his career to date thanks to an astute marriage to a beautiful wife. However, as the story begins, the wife has been murdered and the husband himself is in the throes of a love affair. Suspicion initially falls on the surviving spouse. 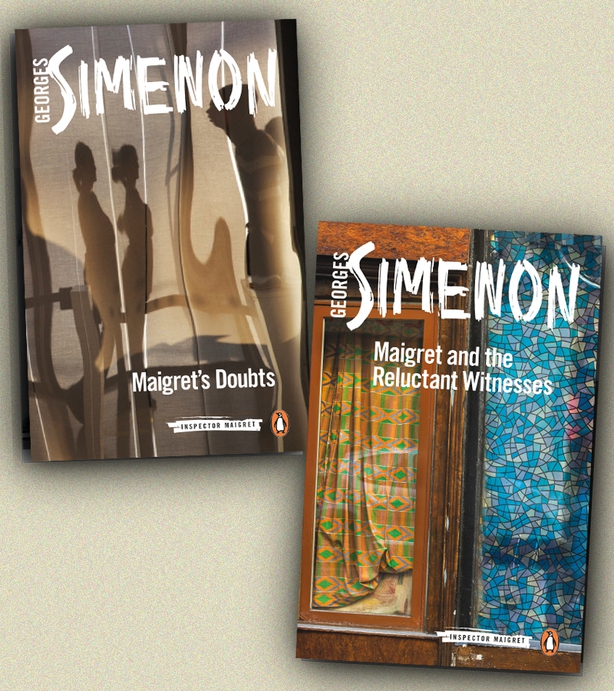 In number 53 in the detective series, Maigret and The Reluctant Witnesses (first published in 1958 as Maigret et les témoins récalcitrants, and released on March 1) a once-wealthy family closes ranks when one of their own is shot, leaving Maigret, and a troublesome new magistrate to unravel a tortuous knot.

The estranged black sheep of the family, Veronique, may hold the key with her knowledge of the depths to which the family will sink to protect their reputation: It was as if suddenly, long ago, life had stopped here, not the life of the man lying on the bed but the life of the house, the life of its world, and even the factory chimney that could be seen through the curtains looked obsolete and absurd.