As has already been commented elsewhere, had a bomb dropped on Dublin's National Concert Hall last night, the Irish music scene as we know it would have ceased to exist.

The great and the good landed at the NCH last night to pay their respects to the mighty Shane MacGowan, upon the occasion of his 60th birthday - better still, the man has defied the odds to remain alive and kicking, and still capable of belting out an 'auld tune - and long may he continue to do so.

And what about that line-up? Arguably the finest assembly of contemporary rock musicians (accompanied by the odd trad veteran, and a Hollywood megastar) to ever grace an Irish stage, the line-up on the night included (deep breath) Nick Cave, Bobby Gillespie of Primal Scream, Glen Hansard, Camille O’Sullivan, Johnny Depp, Cerys Matthews, Carl Barat of The Libertines, Lisa O’Neill, Finbar Furey, whenyoung, Glen Matlock of The Sex Pistols, Clem Burke of Blondie with Cáit O’Riordan, Spider Stacy, Jem Finer and Terry Woods of The Pogues. Add to the mix unannounced guest turns from Bono, Imelda May and - making a glorious return to the stage after an extended absence - Sinead O'Connor, and well - you really had to be there.

The tragic event that preceded the occasion - the passing earlier that day of Dolores O'Riordan - was addressed by a number of acts onstage, with Bono dropping a few lines of The Cranberries' Linger into his performance of Rainy Night In Soho, accompanied by Johnny Depp on guitar.

President Michael D. Higgins presented Shane with a special NCH Lifetime Achievement Award in recognition of the power and poetry of his work, and his singular contribution to Irish music. 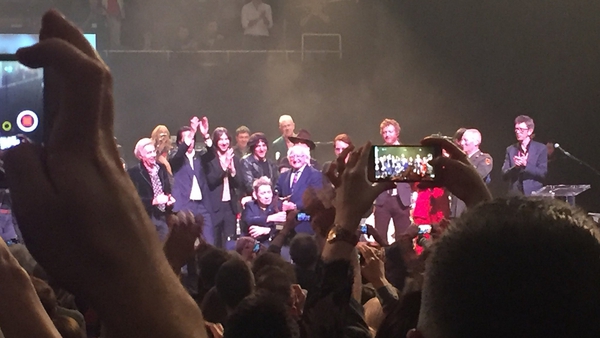