First Fortnight began in 2010 as a volunteer-led initiative and has grown to the extent that, in 2016, the charity was instrumental in staging the inaugural European Mental Health Arts Festival in Athens. This time next year it will host the second ever European Mental Health Arts Festival in Dublin. How is it that a group of Irish volunteers have created and grown a cultural event from a kitchen table to a major national event? Co-founder JP Swaine explains how....

In January 2010, hardly anybody spoke in public about mental health. When it was spoken about it was generally in negative terms. Our simple idea of creating a space in the cultural calendar for people to come together and share their stories as humans with experiences of mental health through a variety of art forms has now brought us many years along a road.

We weren't here to patronise the affected; we were here to challenge the public’s attitude about mental health stigma and discrimination, so the art we were interested in needed to provoke and cause disruption.

Mental health is now broadly understood as a cultural and social issue as well as a health concern. Reducing the stigma of having a mental health problem and the discrimination experienced by those with a diagnosis of mental illness are central concerns for health providers and policy makers. As volunteers and citizens, those of us who created and sustain First Fortnight have built our ideas, models and frameworks in a way that they can be replicated in many locations where a mental health festival can do some good. You could be forgiven for thinking we had it all figured out at the start.

Coming off the sidelines

Right now, I'm sitting typing at the same kitchen table that we started First Fortnight at more than eight years ago. There were just two of us then, myself and David Keegan, now First Fortnight’s CEO. The economy had collapsed around us. Like most of our friends we were lost between figuring out how to stay or figuring out how to leave. We would talk long into the night about what we might do trying to make sense of the world that was in chaos around us. Set up a company, write a play, organise a gig. There was creative energy between us and we wondered aloud every time we had the time to sit together. In that wondering, infused with all the reality that financial crisis Ireland had to offer us, a moral code began to accompany the creative moments. And while we did not know it at the time, we were getting ready to come off the sidelines and start to make something new in a world that didn't seem to be working as it should.

Starting a grassroots organsation isn’t really anyone's idea. It can only grow from a group. Stephen Johnson, in his book, Where Good Ideas Come From, talks about the need for hunches to collide in order to form good ideas. When I think back on what has really made First Fortnight what it is today, it is partly to do with the original idea of combining two concepts; using the beginning of the year to talk about mental health via the arts, and, secondly, and undoubtedly more importantly, the hunch that we needed more people like us to shape what this mission could become.

In order for all of us to look forward to a better future for our national mental health, we all need to own the change. We all need to come off the sidelines.

The team that we assembled to form the original board of the charity was not a happy accident but a strategic attempt to recruit some people we thought could make a difference. We fostered a culture of maximum freedom with maximum responsibility. This became fondy known as the 'You break it - you bought it' rule. If you are convinced your idea is the one that has to be advanced, then it is up to you to lead it. We never voted on anything. The group trusted each other to bring their ideas. The meetings were long, at times unstructured and but always creative. Those of us who were lucky enough to have jobs and be able to stay in Ireland at the beginning of the noughties were often drowning in extra work for less reward. If you wanted to do something different, interesting or valuable, then this had to be done on your on time. This DIY passion was the fuel that fired the engine.

Our first two efforts,in 2010 and 2011, were in essence our incubation stage. With no money, no real support and no clear idea of what came next, we organised two music-based events with some talk and visual art components attached. Both of those outings were met with overwhelming positivity, national media coverage and offers of help to keep going and do more. In 2012, we decided that First Fortnight was not just a period of time that ended with an event, but a mental health arts festival. With the exception of a similar film festival in Scotland, which we only became aware of a month before our launch, this had not been done before. By the summer of 2011 we had a limited company, an application for charitable statues, a bank account and a team that was bursting with energy. All we had to do next was fail a little more.

Our visual arts curator Eithne McAdam was instrumental in shaping the group's thinking on what artistic principles were necessary to meet the human challenge the project presented. She was adamant that to be truthful to the humanity of our mission, we needed to reject art world labeling such as 'outsider art' or 'art brut' and be extremely cautious with anything that confused the art material created by individuals through therapeutic processes and art produced for public expression. We became empowered through these emerging programming principles to tackle hard issues through the correct lens. We weren't here to patronise the affected; we were here to challenge the public’s attitude about mental health stigma and discrimination, so the art we were interested in needed to provoke and cause disruption. Across all of the art forms, our group sought out work that stood on its own two feet in its respective discipline while having something to say about mental health in today's society. Quality and relevance remains our core programming principle.

We grew a communnity, they’re building a movement

The festival, the charity and indeed the now well-established creative therapy service has grown consistently year-on-year. The original organisers all remain connected and involved in some capacity. But the roots of the organisation have gotten deeper as more and more highly committed volunteers join the ranks each year. We started out as part of a campaign, but its clear to us now that we are at the centre of a movement. Across 17 counties in Ireland and across 10 European countries, the First Fortnight principles of mental health arts activism have begun to be adopted and implemented. Our role at the centre of the charity is shifting year-on-year from those who organise events to those who organise groups of people who organise events. These events form part of this national and multi national happening.

You could be forgiven for thinking we had it all figured out at the start.

Its truly humbling to see so many people from so many places stepping up and taking on First Fortnight events in their our towns and villages. In order for all of us to look forward to a better future for our national mental health, we all need to own the change. We all need to come off the sidelines. It doesn't matter if you don't know how - we didn't either. Just get to work, ask for help and figure it out. You will be amazed at the good you can do!

JP Swaine is the co-founder and director of the First Fortnight mental health charity, which runs an annual arts festival and an art psychotherapy service. First Fortnight 2018 is currently underway in 17 counties across Ireland and runs until January 20th. See FirstFortnight.ie for details. 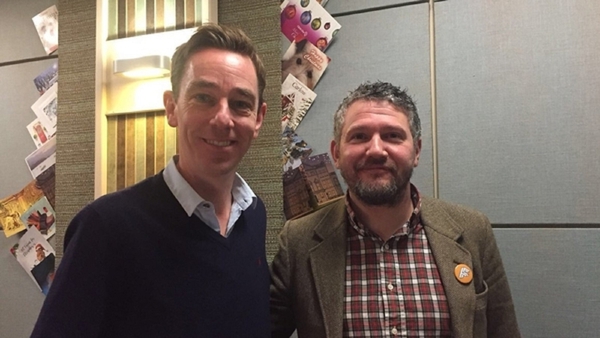