In a special Christmas Day edition of ‘cabaret of conversations’ Pantisocracy, unofficial Queen of Ireland, Panti Bliss hosts a gathering exploring how we draw upon the traditions of being Irish, in language, music, song, poetry and dance to re-imagine anew ourselves and our place in the world.

My sisters and I would write our letters with care.

Tongue out in concentration, I would mark out each letter slowly and deliberately with seven-year-old gravitas, knowing that as soon as I had finished, my mother or father, with similar gravitas, would place the letter in the fireplace and coax the burning ash to float up the chimney and out into the dark Mayo night, where it would drift and float, till it reached the magical Mr Claus.

My letter would begin and end with the expected polite greetings, enquiring after the health of Santy and his good wife, and passing on my best wishes to Rudolph, but both Santy and I knew that it was the list, sandwiched between these salutations, that was the real reason I was writing.

It was a short list, just three or four items, in descending order of magnitude and importance. The last item, gently but firmly insisted on by my mother, was always the same. In case of supply chain problems or industrial action by the Elves, she’d make sure I wrote, 'Or a surprise'.  I suppose you could call it a ‘get out Claus' clause.

But the first item on my list was also always the same. My Number One, my first preference. Every year, after checking the spelling, I would carefully write in all capitals at the top of the list, 'A GORILLA SUIT'. For some now-forgotten – but probably Tarzan based – reason, I had decided that only a gorilla suit would make my life Mayo life complete.

Of course nowadays, with the internet and Amazon and the manufacturing power of a billion Chinese at his fingertips, no doubt Santy could deliver on my oddly specific hairy simian wish, but at the time, in 1970’s Mayo, with only a few French elves on a work-to-rule and the limited options available in a Galway toy shop, Santy would – my mother explained – do his very best but, just in case, I did put down 'or a surprise' didn’t I?

I did. But every year, as stubbornly as hopefully, I wrote 'A GORILLA SUIT' at the top of the list, and every year, my Christmases remained stubbornly and resolutely gorilla free.

We put great store by Christmas.

You can tell, because we say "We’re doing it smaller next year" or "Next year I’m going away" but we never do, and we continue to food shop as if stocking a wartime bunker and argue over who cooked it who ate and who didn’t dish wash it.

Whether we love it or hate it, we give it weight and meaning.

And you can tell we give it weight and meaning because we love it or hate it.

We fill it with memories, fattening its significance each year as we add more. Mementos of weather, and faces, and silly jumpers, and novelty gifts that had already broken before The Sound of Music came on.

Like an old cinema reel we revisit our Christmases Past –  of songs and gins and rows and slights, hugs and tears and cuddles and of course sherry trifles. Of kitchen disasters, and sibling rivalries. Of people who couldn’t make it this year, and yes, loved ones who won’t make it again.

We put great store by Christmas.

You can tell, because we argue over what it is and what it means and who gets to own it. Occasionally a Grinch will try to steal my Christmas.

You see, while I love Christmas, I’m not a religious person. A fact that forces my poor mother to practice her own religion a little bit harder, as she intercedes on my heathen behalf. Piling defensive decades of the rosary between me and my final reckoning. My Christmas is secular. The very worst kind of Christmas I’m told. As if secular is interchangeable with trite or meaningless,  shallow or pointless.

But it’s my Christmas. And it’s been my Christmas for forty nine Christmases now. And my Christmas has weight and meaning for me. The weight of cross country train journeys, and last minute shopping, and neighbours popping in and out, and a small dry sherry for Granny. Four decades of Mammy’s plum pudding, bad cracker jokes, and "Keep an eye on the turkey, I’ll just pop down to Mary, it’s her first Christmas without Joe."

The meaning of family traditions, some that pre-date me, and others, more recent ones that quietly, and unconsciously, became cherished ones without us noticing. Like watching Christmas Strictly on the telly and slagging the frocks.

I like my Christmas. My Christmas of family and friends and place. It’s nieces, and siblings, and Dad snoring over Harry Potter. It’s another pair of gloves unwrapped and exclaimed over, as if we’ve never seen gloves before. It’s a gin & tonic with Mrs Guckian next door, and a squeaky bone wrapped for Penny the dog as if she cares about wrapping. It is memory, connection and nostalgia.  It is a remembrance of those gone but still loved, but it’s also an open door, welcoming new memories, new connections, new loved ones marking their very first Christmas in this history of me, and mine, and ours.

There’s not one Christmas. There’s an infinite number of them. As many as we make. Perhaps as many as we need.

So happy Christmas. Happy your Christmas, to you and yours. 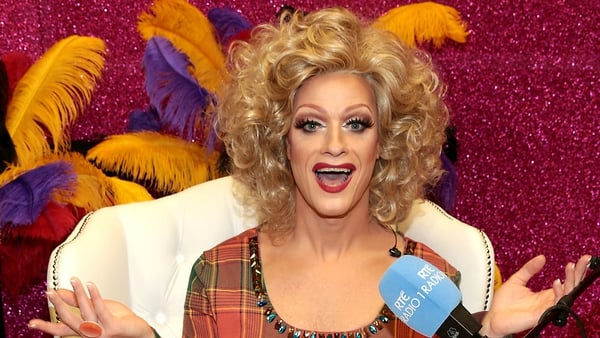 Panti Speaks: That's How the Light Gets In