This Christmas, Dublin's Gate Theatre presents its own unique spin on a classic fairytale... Writer Nancy Harris writes about the challenges of reimagining The Red Shoes for a new generation.

Fairy-tales are deceptive. We often think of them with a vague fondness, like a childhood friend we haven’t seen in a while, and though we might not have read Cinderella recently, we remember the story - right down to the moment the ugly sisters get their eyes pecked out by pigeons… No, I didn’t remember that part either. But it’s right there in The Brothers Grimm, along with one of the ugly sisters cutting her own toe off to squeeze into the famous golden slipper. She’s urged on by the wicked step-mother who offers the chilling consolation, "When thou art queen, thou wilt have no more need to go on foot."

Fairy-tales are often more brutal than we remember, which has led to a lot of white washing over the years – by Disney and others -  who feared them too harsh for children. Now when we say something is ‘like a fairy-tale’ we generally mean that it follows a predictable formula in which a hero or heroine encounters some obstacles, eventually triumphs, and everyone lives happily ever after. Yet the truth of fairy-tales is much more opaque.  And there is no exact formula. The Ugly Duckling might turn into a swan, but The Little Match Girl dies. The brevity of the stories - some little more than a page - often adds to the shock.

Do you have to change vast swathes to ensure that our delicate sensibilities aren’t offended? Or do you stick with the original material, come hell or high water, even if certain elements no longer ring true?

The Red Shoes is certainly one of the more opaque fairy-tales, which is what makes it such an exciting proposition for a contemporary retelling - as well as a daunting one. And while there’s much that is magical in the original tale, there’s no avoiding that it does seem intended as a dark warning against the dangers of vanity - something that, to modern eyes at least, hardly feels like a crime. So how do you approach something like this for a contemporary audience? Do you have to change vast swathes to ensure that our delicate sensibilities aren’t offended? Or do you stick with the original material, come hell or high water, even if certain elements no longer ring true?

When myself and the director Selina Cartmell began talking about this production, we had more questions than answers.  But we were clear on one thing - we did not want to white-wash the difficult parts of the story. Certainly, I was free to add characters, develop plot, make things up, and I have. We knew that dance and music would play a big part, but the basic tent poles of the fairy-tale – difficult, wonderful and shocking as it sometimes is - had to stay in place. Only in this way would we discover if the story had any real value to a contemporary audience, anything worthwhile to tell us now. And we’ve found that it does. In spades.

The Red Shoes is certainly one of the more opaque fairy-tales, which is what makes it such an exciting proposition for a contemporary retelling - as well as a daunting one.

Hans Christian Anderson’s original story is set against a background of oppressive Christianity, in which an orphan’s passion for a pair of sinful red shoes and the wild dancing which follows, seems like an unconscious rebellion against the stifling environment she finds herself in. In the fairy-tale, Karen is brutally punished for her transgression, but did she transgress at all? In many ways, the story could be read as the struggle inherent in trying to please two masters – a rigid establishment that says ‘conform’, and a seductive counter culture that that says ‘rebel’ while ignoring the price someone powerless might pay for doing so.

Yet it’s also a story of resilience and ultimately of recovery of self, which absolutely has value for us today. After all, no one gets through life without loss, confusion or grief- we all lose our footing at times. But if fairy-tales- can teach us anything, it’s that our wounds have the potential to be our strength.  And even if our production arrives at a different conclusion to the one Hans Christian Anderson might have intended, the elements that got us here, can all be found in the fairy-tale he gave us.

The Red Shoes is at The Gate Theatre, Dublin until January 27th - more details here. 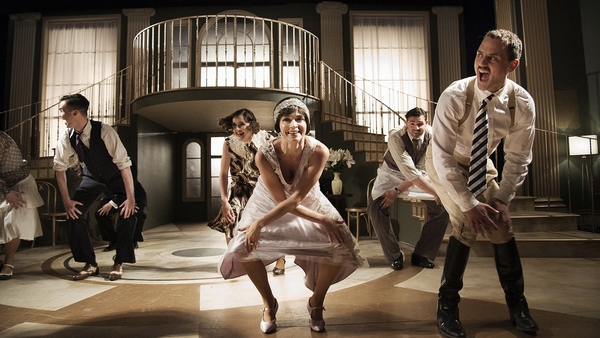