We're delighted to present an extract from Kenneth King's memoir The Endeavourist, published by RedDoor.

Would you, should you, ever sell your well-appointed, five-storey house near Buckingham Palace to uplift an impoverished area in rural East Africa? Kenneth King thought he should, so he did. This is The Endeavourist.

1. How I became a bastard

In the marble and glass towers of London and Manhattan, energy, intelligence, ingenuity and stamina can be lavishly rewarded. This had become my world during the 1990s. In the years since I’d moved from Dublin to London, I’d moved from insurance into the high-risk, high-reward business of investment banking. I found it fascinating, and I quickly gained a reputation as a person who could take on the big global projects and get results.

I bought myself a home in London – a five-storey townhouse near Buckingham Palace. I bought cars, took luxury trips, invested in a few works of art. I worked ferociously hard, putting in the seventy hour weeks the job demanded and shuttling backwards and forwards between London, Frankfurt and New York

Now I was well and truly swimming with the sharks.

I was beginning to feel burnt out, mentally, physically and emotionally, though I worked hard to ensure that nothing showed on the outside. I was still working ridiculous hours, scrambling on and off planes for meetings in Frankfurt, New York, Singapore, India and Tokyo, but the hunger to achieve had been sated. I was beginning to wonder if there was something else I should be doing with my life, and I was having to put in huge amounts of effort just to stay afloat. My results dipped, and I realised the blood in the water was my own. Investment banks can smell selfdoubt and they are not forgiving.

All too soon, the call came. I was told my services were no longer required and given an hour to collect my possessions, say goodbye and leave. I’d get six weeks’ money and that was the end of it. I was unemployed. Worse than that, I felt finished. My precarious new position and declining demeanour soon impacted on my very recent marriage, which was more fragile than maybe either of us had realised. I couldn’t see how on earth I would ever be able to pay off the mortgage. I felt lethargic, angry, sad and fearful. I was worried about my health, about my lack of energy, about having no reason to get up in the morning. I could see myself ending up alone and drunk and desperate – and I didn’t like what I saw.

After a serious disagreement about money and family, there followed a sudden separation and then lawyers’ letters with a demand for half my assets. The dream had become a real nightmare.

It was now 2008, the year that I felt at my lowest ebb. Divorced, useless and broken. Devastatingly shattered on the inside. As the financial crisis swept the world, all the banks began laying off their staff. There were thousands of ex-bankers in London like me competing for the same handful of jobs. Having been a workaholic, I would wake up in the morning and wonder who I was. I felt like a has-been. One day, walking down Oxford Street alone, it especially hit me – all of the loss, all of the pain. I went down a side street into some dark doorway and found myself hunkered down on my knees sobbing uncontrollably

What could I do? Where could I go?

It’s all very well having a blinding flash of inspiration and deciding that you’ll go to an impoverished African country and do something that will make a difference.

How? How, exactly, was I going to make it happen? I needed to know a lot more about what needed to be done. I needed to know what had been tried already, what had worked and what had failed. I’d read about the UN’s Millennium Development Goals, the bold, ambitious eight-point plan, beginning in 2000, that aimed to eradicate poverty and hunger and improve health and education opportunities across the developing world by 2015.

But I soon came across a single sentence that stopped me in my tracks: referring to the eight Millennium Development Goals, it stated ‘Already those noble ambitions are receding into the distance.’ What? How could this be?

only five years into the project! The target for achieving the UN’s eight Millennium Development Goals had been set at fifteen years. How could confidence in achieving these fifteen-year goals already be receding into the distance after just five years?

I was intrigued. Why the hell was the world so far behind schedule on this vast project that was crucial to a billion of the world’s poorest people?

One key element in the UN’s approach to the MDGs had been the appealing idea of creating ‘Millennium Villages’.

The village of Sauri, in western Kenya, became the first ever Millennium Village project, in 2004. During the project, there had been a big increase in maize production, malaria dropped sharply, and the local primary school jumped from an outside ranking to the top ten. Progress wasn’t perfect, and some of the advances might have happened anyway, but still I felt hugely inspired by the whole concept. This was exactly the sort of project I felt drawn to. I had the energy, the desire to do something valuable and the planning and project management skills to play a useful role. I wanted to get involved, and I decided to offer my services to the UN. I didn’t really have a plan but by now I was on a mission.

For weeks, I made calls and fired off emails, trying to offer my services free of charge. But nothing happened. That’s not, apparently, how it works. You don’t just go and knock on the front door of the UN

. My frustration grew as I bounced from pillar to post. I couldn’t break through and make contact with anyone who could help get me to my ultimate target of finding and talking to someone with authority to take a decision about including me.

I was sure the Millennium Village approach was right, though.

‘Fuck it!’ I decided. ‘I’ll just damn well go to Africa and create a Millennium Village project myself, then. And I won’t lose five years with delays to get started either. Houston, we have fucking lift-off.’

It was stark raving bonkers – a batty, preposterous, perhaps even deranged scheme to establish a Millennium Village project myself in order to advance the UN’s inspiring Millennium Development Goals.

But it also felt like one of those life-changing moments. 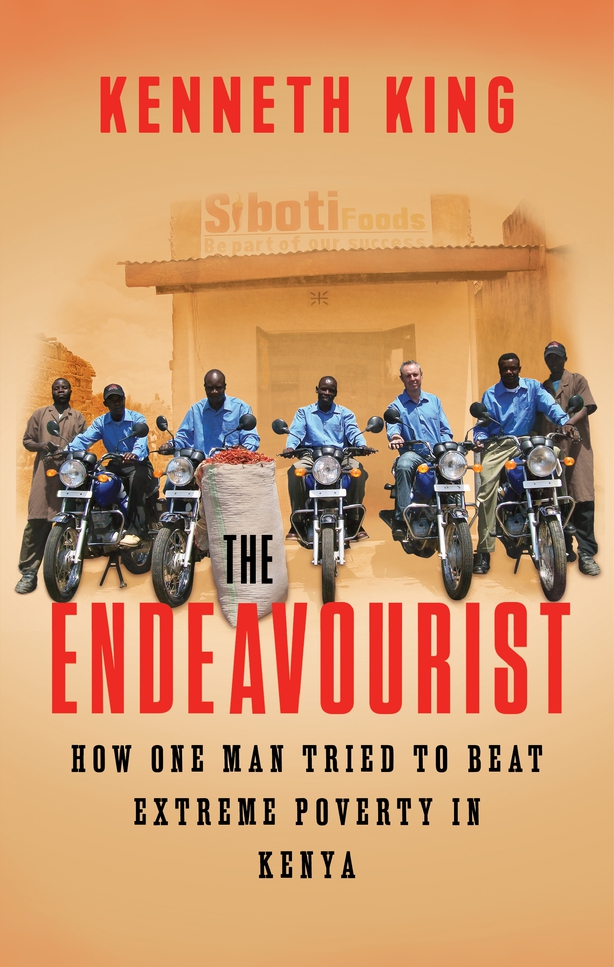 About The Author: Kenneth King was born and raised in Dublin. He moved to London in 1990, where his career went from strength to strength, moving from insurance to investment banking, making him a wealthy and successful man.A sudden and devastating change in circumstances led Kenneth to review what was important to him, leading him to Siboti, and the story he recounts in this book. He now lives and works in Luxembourg.