When the artist Vera Klute won the National Gallery of Ireland Hennessy Portrait Prize in 2015, she used the money (€15,000) to buy a kiln. The following year, some of the cool, white porcelain sculptures she fired inside it went on show as part of her Molesworth Gallery solo exhibition in Dublin, entitled Breeding Ground.

Klute’s wall-mounted porcelain works resembled petrified pieces of human flesh. Flesh & Blood I hung like a haunch of meat, sliced through, but it also featured flower formations emerging tulip-like from one end. On stepping closer, you could see the curved back and thigh of a foetus tucked up inside.

Much of the work in Breeding Ground related to Klute’s own recent experiences of pregnancy and birth. The porcelain pieces took a forensic approach to the body, neatly demonstrating the oddly alienating familiarity of the human form when it is explored and disrupted on an anatomical level.

Flesh & Blood II is a quietly arresting piece of sculpture. It features a tracery of pattern, the imprint of fabric, like a lace curtain, on inner flesh. Deep in the layers, again there appears the shape of an unborn human being, rear-end exposed. Skin-covered flesh is presented like a host or shroud protecting the foetal form inside. Layers of fat, muscle and bone are frozen in porcelain form. This is a fantastical anatomical specimen parsed through layers of memory and experience.

The internet has made the 21st century an era in which anyone curious and talented enough, can add to their technical skills as required. Klute is a 21st century polymath, a modern Renaissance woman and an auto-didact. She taught herself taxidermy on the back of her decision to use dead birds as part of her 2014 RHA Ashford Gallery show. She won the portrait prize that led to the kiln for her realist oil painting of Anne Ryder, a friend’s mother, but as a portraitist, she is as likely to produce a digital animation or sculpture as she is to put brush to canvas. She draws, paints, makes tapestries, and kinetic works too, with waving hands or blinking eyes.

Born in 1981 in Salzkotten, Germany, Klute came to Ireland to attend Dun Laoghaire IADT, graduating in 2006 with a first-class honours degree in Fine Art and a slew of emerging artist awards. Her commissioned portraits of the social justice campaigner Sister Stanislaus Kennedy (an oil painting) and the theatre director Garry Hynes (a sculpture in concrete and porcelain) are now part of the National Gallery of Ireland Portrait Collection.

Her ability to move impeccably between mediums is married to a sense of solid quietude that marks her work as the product of deep contemplation. A consistently understated undercurrent of anxiety is tempered by the sheer control she exerts over her widely varying techniques.

Klute’s art is intimate and dispassionate at once, unsentimental but genuinely curious, occasionally even uncanny. Her approach is that of a scientist, but the best of her work has emotional integrity at its heart. And it is into this category of dissection, analysis and re-assembly that her glazed porcelain sculptures fit. Measuring approximately twenty centimetres wide, Flesh & Blood II has implications of surgery and echoes of Mary Shelly’s Frankenstein’s monster. It poses uncomfortable questions about human frailty and strength. It may resemble a macabre anatomical sample, but when viewed in person, it has a stronger air of live flesh, frozen and cut open to reveal something else, also living, inside.

The foetal body appears plump and fit, suspended for a moment, captured in the middle of healthy development. To make this form visible in an artwork at a time when access to abortion services in Ireland is once again the subject of heated debate, to reveal and explore the fleshy physicality of human gestation, feels risky, political and potentially divisive.

Klute solves this problem by allowing Flesh & Blood II to be cold and hot and messy at once. It is meaty and ceramic, personal and impersonal. She shows us beauty and horror, hope and mortality, side by side. The porcelain works were shown alongside drawings of clustered body parts, and paper sculptures depicting impossible entanglements of multiple limbs. The whole show explored the notion of the body as a trap, and as a source of infinite potential. 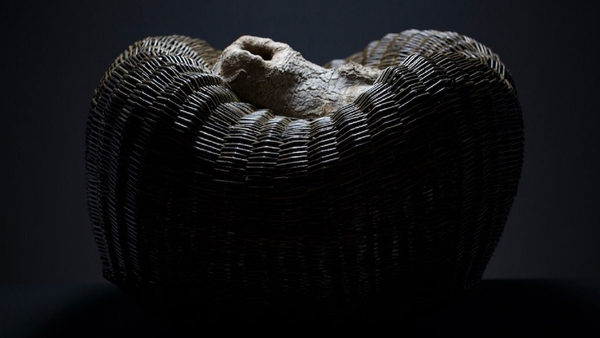