What will break the stranglehold of the extreme right wing in American politics and elsewhere? The elevation of corporate power to the offices of state, as witnessed in the formation of Donald Trump’s Cabinet, for example. And how can the people, the ordinary citizens who have been left behind, respond and put forward a viable alternative?

These are some of the questions Naomi Klein addresses in her new book, No Is Not Enough: Resisting Trump’s Shock Politics and Winning The World We Need, and they form the basis of her chat this morning with RTÉ Today programme presenter, Cormac O hEadhra. The answer, she says, lies in grassroots movements coming together and changing the direction of the political wind. 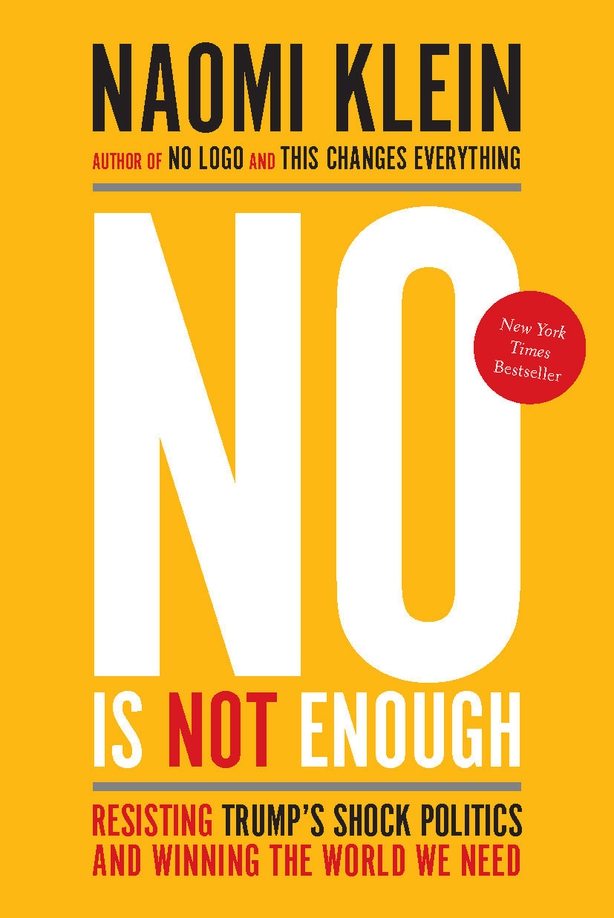 Ironically, these democratic, people-powered social movements could learn a thing or two from those they would identify as their nemesis, the Tea Party movement, which showed how the grassroots could influence and turn the direction of one of the world’s oldest political machines. In that case, the Grand Old Party, the Republicans. Time now, she says, for a Democratic equivalent.

"We are in this moment where the ideological project that really began under Reagan and Thatcher is in profound crisis… What I have in the book is an example of a "People’s Platform", something that is not designed on high by a political party, but at the grassroots, that represents a coming-together of movements that, too often, work in individual silos. The climate movement. The racial justice movement. Economic justice movements, coming together and deciding, what do we agree on? Where do our visions intersect?"

Naomi Klein is the award-winning author of books such as No Logo, The Shock Doctrine and This Changes Everything. And although her call for grassroots action is nothing new, she insists that effective action will require established political parties, such as the Democratic Party in the United States, to engage with this new direction. And so, it’s back to that lesson, so clearly taught by the "other side" so to speak. The Republican Party’s acquiescence to the Tea Party agenda.

What Naomi’s vision will require, said Cormac, is a "superhuman effort" from small groups across the United States, working together. Can it be done? Can the grassroots really push upwards, pushing forward viable candidates, and a viable alternative to what has gone before? According to Klein:

"The task is really to energise this vast part of the American electorate that does not vote. That is not going to happen until there is a forward-looking, bold agenda, that is willing to go after where the money is, where the power is. That’s what the Sanders camp is working on right now. The majority is out there. It’s just a question of activating them."

The existing pattern is unsustainable and destructive, she says, with Donald Trump’s cabinet loaded with extremely wealthy former CEOs and former Wall Street executives. So much for  "draining the swamp", she says.

Unsurprisingly, Naomi Klein is a fan of Bernie Sanders in the United States and Jeremy Corbyn in the UK, both of whom, she says, are putting forward radical but welcome agendas for change.

No Is Not Enough: Resisting Trump’s Shock Politics and Winning The World We Need is out now, published by Penguin. To listen to the full interview with Naomi Klein, click here.