In 2011, the National Gallery of Ireland closed its doors at Merrion Square, and two thirds of the building, to begin one of the largest refurbishment projects in the history of the state.

Six years later, after numerous delays and costing close to €30million, the NGI finally re-opened the historic Dargan and Milltown wings earlier this month. A remarkable new observational documentary film, Portrait Of A Gallery (screening on RTÉ One on Tuesday June 27th), secured unique access inside the walls of the the nations most visited cultural attraction, while the institution went through huge change. If ever there was a time to have cameras in the gallery, during its 150-year history, this was it.

Three and a half years in the making, director Adrian McCarthy and Wildfire Films observed the day-to-day running of the institution while witnessing the transformation of the dilapidated historic Dargan and Milltown wings. It's a mammoth challenge for architects Heneghan Peng, the Office of Public Works and their construction team as they attempt to feed modern services beneath a protected 150 year-old and 110 year-old building, while also opening up new spaces never before seen by the public.

"We will be opening up to the public saying this is yours, come back and claim it because you’ve been out too long" -Sean Rainbird, NGI Director, May 2107.

There has been a legacy of problems with dampness, water damage and temperature control at the NGI, making these historic wings unfit to house the national collection of Irish and European art. There has also been the ongoing (and not insignificant) issue of people getting lost as they navigate their way through the buildings. The objective was to transform these impressive Victorian buildings back to their original beauty - while creating one of the most impressive modern gallery spaces in Europe.

Throughout this formidable construction project, the gallery decided to keep its Clare Street entrance open and created a buffer zone between the noisy building project on one side of the wall and the smaller busy public galleries in the Beit and Millennium wings on the other. Over the life of this transformation, Portrait Of A Gallery captures director Sean Rainbird and members of his team as they deal with over 700,000 yearly visitors, while planning on-going exhibitions and preparing the collection for the largest re-hang in the Gallery’s history.

The film spends time with colourful head curators Adriaan Waiboer (Head of Collections and Research), Brendan Rooney (Irish Art) and Adrian Le Harivel (British Art) as they meticulously prepare for months in advance of the re-hang. Between them they are responsible for the layout of the majority of the 650+ paintings, which will hang in the newly refurbished galleries.

"We’ve made maps of where pictures are going and we’ve been staring at these maps for way to long now and we want to start hanging. The moment of truth is coming". -Adriaan Waiboer.

We also meet head of conservation Simone Mancini and his team, as they prepare masterpieces like the newly restored Marriage of Strongbow and Aoife by Maclise – the largest painting in the collection, "We are working ahead of everybody else in the gallery, because we need to prepare the collection well in advance of the re-opening. So there is huge pressure. But we do what we do because we love it". We also meet with paintings conservator Ele von Monschaw as she makes the final touches to the damaged Monet painting ‘Argenteuil Basin with a Single Sail Boat’ before its return to the public gallery. The painting was violently vandalized by a member of the public in June 2012.

The John Paul Construction site manager is colourful Dubliner John Francis. "I’ve often said the title of refurbishment can be very deceiving," he says. "It gives the impression we’re doing a little bit of plastering and a touch of paint here and there, but I think the internal re-build of the National Gallery of Ireland would have been more appropriate".

In Portrait of a Gallery, we get to know builders, cleaners, gallery attendants and conservationists, and speak to some visitors to this beloved national institution. All of this gives an insight into how a National Gallery, one which belongs to the Irish people, functions while witnessing the challenges, pressures and expectations as they head towards the re-opening.

Filmed from January 2014 until June 2017, McCarthy's camera observes key moments on both sides of the buffer zone, capturing the highs and lows of the building project as the team deal with surprises underground, bad weather and the pressures to deliver the building back to the NGI on schedule. We get intimate with the iconic Carlo Cambi carved wooden door frames as they are removed, repaired and returned to the Milltown wings – along with a newly discovered handwritten note on one of the frames scribbled by Mr Cambi himself in 1901. We also witness the departure of the William Dargan statue (who helped establish the NGI) from the front lawn, where a huge energy center will get built underneath. His majestic return, thirty months later, signifies the end of construction.

As the curators and art handlers start to move the paintings out of storage and into the newly finished gallery spaces, it takes an army to transport the giant newly conserved Marriage of Strongbow and Aoife painting as it is un-framed, stretched and rolled before making its way from conservation, through the building, to its old home in the newly refurbished Shaw Room and positioned back on its wall. Curators and art handlers work in partnership as many of the finest paintings in the collection are finally re-hung. Some have never before been seen by the public.

On 14 June 2017, the day arrives, with An Taoiseach officially opening the newly refurbished National Gallery of Ireland. Within 24 hours, the Irish public finally get their chance to return to their beloved Dargan and Milltown wings. It has been a long wait. Was it worth it? 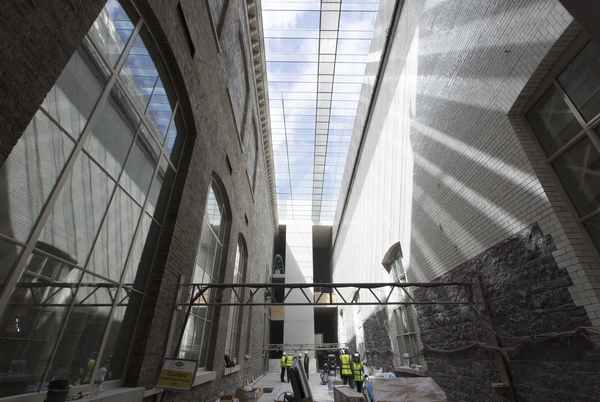 Historic wings re-open at the National Gallery of Ireland