We're delighted to present an extract from This Family Of Things, the new novel by Alison Jameson, author of Under My Skin and Little Beauty, published by Penguin.

On the day Midge Connors comes hurtling into Bird Keegan’s life, she flings open his small, quiet world. He and his two sisters, Olive and Margaret, have lived in the same isolated community all their lives, each one more alone than the others can know.

Taking in damaged, sharp-edged Midge, Bird invites the scorn of his neighbours and siblings. And as they slowly mend each other, family bonds – and the tie of the land – begin to weigh down on their tentative relationship. Can it survive the misunderstandings, contempt and violence of others?

A poignant and powerful study of the emotional lives of three siblings and the girl who breaks through their solitude.

On that Saturday Midge and her father were fighting. At times she allowed this to happen, knowing that when he got her home he would drag her from the car and out into the bushes and beat her with anything he could put his hands on. Once when she was a child he used an iron and another time the wheel of an old pram. And all this with her mother, Bridget, watching and not really seeing, a helpless sort of woman, soft and faded like a cushion. The youngest child, a boy, would stand, frozen and staring, and two of the older ones would try to catch her and hold her down for their father. And Midge did not blame them at all for this. She too might have chosen desperate means to stay on his good side – but she had learned a long time ago that there was only one side to her father, the man who had made her and wanted to kill her. So far he had shown her no love at all and instead spent his time trying to plough through her.

This fight was about the money she had made from singing at the Beacon Hotel in Tullyvin. The manager, a man who was known around the town as Rocky, said she could come into the bar that afternoon and sing and then pass a small bread basket around and keep the takings. And she had done well that day too because there was a wedding and a christening. Midge had stood there on the spongy carpet that was damp with stale beer and sung her heart out for them. In truth Rocky only felt sorry for her and he knew all about her excuse for a father. And now because she owed him something she worried that she would have to let him do things to her in the dark car park where all the empty bottles were. She had a tambourine – more of a toy really – a guitar and a small keyboard given to her by her mother.

‘The girl hasn’t a note in her head,’ some old one said and there was a fair bit of laughing.

But because they were getting drunk and stupid they dropped a few notes into her basket and Midge had plans for them. She was going to save enough money to make a new life for herself and her mother. But Bridget had told her not to do that. Her mother who washed dishes at the Italian chipper and whose body was loose and worn out from having too many children.

‘Don’t plan,’ she told her daughter. ‘Don’t plan because your heart will be broken.’

But Midge was making money to steal away with. Midge was making money to travel to America with her mother – and if it wasn’t for these plans in her head, this idea she had of living on the other side of the world with the possibility of something good happening, Midge would have walked out into Lough Rinn and let the whirlpool suck her down to the very bottom. And people said there was no bottom.

Then her father had slipped through the door of the bar with that blonde tramp Imelda Conroy. He was in his black ‘leather’ jacket, the dirty grey tracksuit bottoms hanging off him, and he took all the money off her. He did it right there in front of everyone and then sat up at the bar with Imelda and filled her up with brandy. Rocky had tipped her a few euros too and that went into their glasses with the rest of it.

To Midge who stood silently by, drowning in this new humiliation, he said, ‘Wait in the car.’ She was starving and had planned on treating herself to a Snickers bar and a magazine. Instead she cried a bit in the car but stopped as soon as she saw him coming.

There was no point in crying. It only showed him that he was winning at something. The car was an old Toyota with daylight showing through the floor and he only had it because it had been left in a ditch to rot by someone. He turned the key in the ignition with a fresh cigarette hanging out of his mouth and the smell of smoke and drink was sickening her. It was after six o’clock and she hadn’t eaten anything for hours. Her whole house, the world that she lived in, was beginning to fall in on her. She was twenty years old and as she sat there in the car she began to wonder if she could just stop her own life – and do it in a way that he would be locked up for.

Midge waited until the car was on the lake road, out past the town hall, and he was putting his foot to the floor as she knew he would. Here with the November sky thick and starless all around them, he spoke to his daughter and said, ‘Aren’t you a great little songbird, pet, making a few bob for your poor old father?’

He leaned back in his seat on the long straight stretch with the Toyota bouncing and swaying, the whole thing making her seasick, her head like a barrel full of venom that she was ready to spit at him. If he crashed the car he might kill her and that would be the end of the two of them. She didn’t care that much about herself now and it would be worth it if it also finished him. The Guards would know that he had been drinking again and that he had taken her out the lake road and hit a bump and then a lorry might come and down they would all go into the dark, brown water.

‘A little canary,’ he whispered, and so then she began at him, pecking gently at the start, not wanting too much to happen – but in her mind she was going to peck the skin clean off him. He was so drunk that he was in a cloud of clown’s humour and finding himself very funny. But for Midge it would be the Saturday when she fought with her father and changed her life for ever. So she began quietly and slowly at first – knowing that towards the end it would be as if two mongrel dogs had been let loose in the car with a blood-red steak between them. 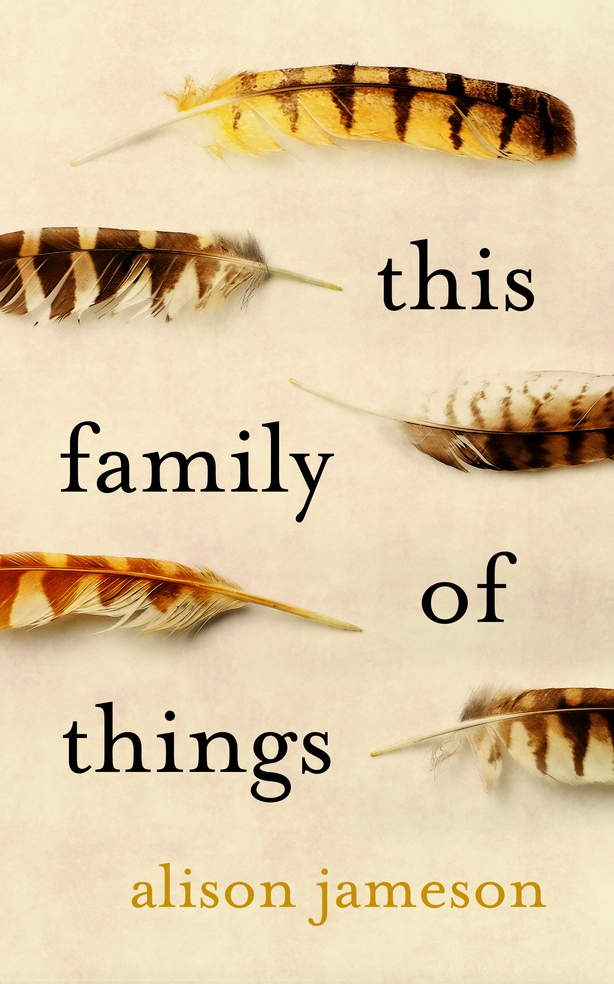 About The Author: Alison Jameson lives in Dublin, where she combines writing with occasional work in her former business, advertising. This Family Of Things is her third novel.

Conversations With Friends by Sally Rooney - read an extract