To mark the award of the Nobel Prize in Literature to Bob Dylan, and his forthcoming Dublin concert, we present some reflections on favourite lyrics from his back pages, via the current edition of Trumpet, Poetry Ireland's essential literary pamphlet.

I always go back to Make You Feel My Love, lines like:

I’d go crawling down the avenue

There’s nothing that I wouldn’t do

To make you feel my love

He calls up a universe of emotion in a handful of basic words, something that others might need entire novels, a thesaurus and considerable sweat to achieve. It’s also the simple, earthy quality of these words, the rhyme and rhythm, and even the touch of melodrama. He’s the kind of poet that makes people fall in love with language, whether they want to or not.

‘Wild mercury’ was how Bob Dylan once described the sound he sought. He defined it as ‘the sound of bells and distant railroad trains … usually it’s the crack of dawn’. His greatest lyrics are mercurial, allusive, elusive. (Mercury is the god of poetry, trickery and thieving – and is the ruling planet of Dylan’s sign, Gemini). I’ve always loved Dylan’s Street-Legal, whose songs are drenched in Tarot imagery. ‘Mercury rules you and destiny fools you’, he sings on No Time To Think. On Infidels, there’s the wonderful Jokerman, a shape-shifting ‘dream twister’, ‘shedding off one more layer of skin / keeping one step ahead of the persecutor within’. The Jokerman might be Jesus, he might be the Devil, he might be a political ‘manipulator of crowds’; he echoes the Fool from the Tarot. The song is driven by pure poetry, exquisite rhythms and shimmering rhymes (‘False-hearted judges dying in the webs that they spin / Only a matter of time ’til night comes steppin’ in’). At times I fancy the Jokerman is Dylan himself, the bard who looks ‘into the fiery furnace’, a ‘preacherman’ who ‘dances to the nightingale tune’ – our swift-voiced messenger, who ‘flies high by the light of the moon’.

Love Minus Zero: No Limit from Bringing It All Back Home (1965). I fell in love with this song when I was eighteen, turbulent, avid for life; I was so hungry for more from life, more of everything, already ambitious for the experience so beautifully caught in those lines from Donne’s Ecstasy:

When love with one another so

Dylan’s song is a young man’s celebration of that kind of companionship, the rare, particular, miracle of finding a twin soul. In Spenser we find the line ‘My love is like to ice, and I to fire’, but Dylan’s beloved is like both ice and fire. Notice, though, as that young man I was very soon noticed, that she’s true ‘like ice, like fire’; notice also that ‘Valentines can’t buy her’, that ‘She doesn’t have to say she’s faithful’. She is her own woman, wise –

And that failure’s no success at all

– and self-confident: ‘She knows too much to argue or to judge.’ A woman in her own right, not a blank screen for the projection of conventional thought or feeling. And it was the first song I taught myself to play on harmonica.

In the late 1970s I was sitting with my first serious girlfriend in that vegetarian restaurant on Harcourt Street. Whatever we were talking about is gone, like the restaurant and what passed for our relationship. What remains: sunlight on floorboards, a broad Dublin afternoon leaning in the Georgian windows, and Dylan’s Blood On The Tracks, which someone had put on the stereo. Hard to name a favourite, but I’ll single out Tangled Up In Blue. Like the track that follows it, Simple Twist of Fate, that song is full of one of Dylan’s persistent themes: moving on, hitting the highway that inevitably spirals back, like a grooved needle, to the same central yearnings – restlessness, love, regret – though my own restlessness came down to an inability to settle on anything apart from writing the occasional poem.

Some are carpenters’ wives

Don’t know how it all got started

I don’t know what they’re doin’ with their lives

When I was 19 or 20 such lines resonated, and they still do at 59; these songs continue to exert what Paul Muldoon called ‘more pressure per square inch’ than many poems.

Everybody who loves Bob Dylan has a favourite album. Mine is Blood on the Tracks, from 1975. It obsessed me for at least a year, to the point where I knew most of it off by heart (no longer true, due to the vicissitudes of age). I still listen to it regularly and it always invigorates. The two great love songs, Tangled up in Blue and Simple Twist of Fate, remain very special, but for the times we are living in, Idiot Wind is the one. On 20 January, as I watched the inauguration of Donald Trump with mounting horror, I was moved to text various friends with some lyrics from the song:

Idiot wind, blowing like a circle around my skull,

From the Grand Coulee Dam to the Capitol

Idiot wind, blowing every time you move your teeth

It’s a wonder that you still know how to breathe ...

It helped to have such lyrical outrage at my disposal.

Masters of War is one of the great anti-war songs. Dylan released it on his second studio album, The Freewheelin’ Bob Dylan, in 1963, at a time when the Vietnam War in all its horror was raging, along with the African-American civil rights struggle, and the emergence of our own civil rights struggle in the north of Ireland. Its brilliance is in its accuracy in every line, and its forthright articulation of exactly who Dylan sees as responsible for warmongering with no regard for human life on any side. To the people in government and the arms trade, he sings: ‘You ain’t worth the blood that runs in your veins’. I have to agree, 100%.

Tangled Up in Blue. Bob Dylan’s poetic ascension should appeal to the Irish in a special way. Ours was, in the deep past, a poetry that was conceived as song, experienced as an unbroken oral to aural circle of total experience. Words and music, that double helix – alive together or not at all, eschewing the page in favour of the air on their tangled journey to the head and heart. Raspy soothsayer and freewheelin’ maker of images, Dylan loosed words from their inky bonds where they burned like wildfire into the very fabric of the times we live in and in his own time, in the modern world. He set the bar on how to give voice to the word, give depth and measure to the tune.

Dylan the poet has been a singular voice in my ear since he first seized my attention with the  lyrical intensity of early compositions such as One Too Many Mornings, Boots of Spanish Leather, and Restless Farewell (looking back I marvel at how one so young could write such voice-of-experience songs), as well the story-telling drive of Lonesome Death of Hattie Carroll. His fecund sense of his own era in early protest and political songs, and their immediacy, was equally precocious. Dylan is impossible to pin down – his reinventions, rebirths and changing identities have been ceaseless: the Rimbaud-esque imagistic fireworks of Highway 61 Revisited and Blonde on Blonde, the pared-down balladry of John Wesley Harding and the confessional poetry of Blood on the Tracks. He led me, and others of my generation, to the possibilities of language. Removed from their melodies, his lyrics may not seem to be poetry in any conventional sense, but his mastery of metaphor and wordplay is something many page poets struggle to achieve. The Nobel Prize may have offended certain literary purists, but his work, which like Whitman’s adds up to a collective vision of America, surely earned this ratification.

Dylan is a shape-shifter and a poet. Don’t Think Twice, It’s All Right has the most beautiful lyrics and holds up a mirror to the self. It works because he plays with tenderness, sweetness, love and forgiveness, with a hint of spite in the mix for good measure. All of this is poured into cleverly crystallised poetic lines about the human condition and all the colours that a lover can evoke in the self – time to move on down the road and walk in the shadows for awhile. It’s certainly a metaphor for life and circumstances as well as being an ode to someone who wasted your time and your heart. How it dovetails perfectly over a honey-toned sweet melody makes this one of my favourite Dylan songs. Dylan said of this track: ‘A lot of people make it sort of a love song – slow and easygoing. But it isn’t a love song. It’s a statement that maybe you can say something to make yourself feel better. It’s as if you were talking to yourself.’

When you ain’t got nothing,

you got nothing to lose.

Though they are not saying the same thing exactly, and the circumstances of their lives were so different, both these lines carry the charge of the zeitgeist they transmitted. Both poets refused demagoguery. Both championed the sovereignty of the lyric. And if Dylan has been pilloried by what I call the Dylan Deniers, who use his own description of himself as ‘a song and dance man’ against him (adding ‘mere’), we do well to remember that the song and the dance are at the heart of the matter of being human. I love the pilgrim soul in him; I love too the scholar of song who had access to Alan Lomax’s vast archive of the folk songs of Europe and America and beyond, the scholar who submerged himself in Francis James Child’s 19th-century anthology, itself a conduit back to the late medieval border ballads. He was my soundtrack for the journeys I made to see the gypsy, the other, l’autre, soundtrack to my life, to the world in English as she is sung:

Outside the lights were shining

On the river of tears

I watched them from the distance

With music in my ears 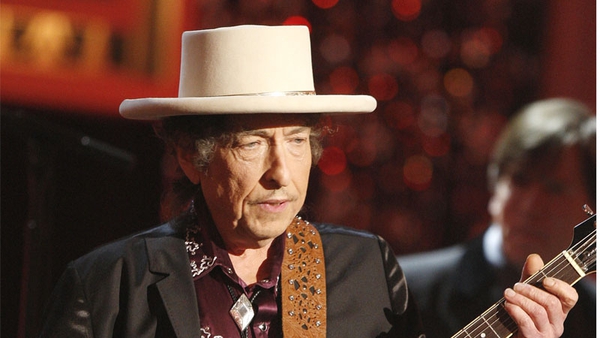