My series Altering States: A 100 Years of the Arts in Ireland, developed and produced in 2016 (and currently being broadcast on Mondays on RTÉ Radio 1 just after 10pm), takes a thematic look at how culture and the arts fared in Ireland following on from Independence and into our own time.

Listen to Altering States: Patronage and Funding below:

This edition of Altering States: 100 Years of the Arts in Ireland, is one of two which specifically look at ways in which artists and the arts have found financial support as well as recognition by way of an award, a commission, a grant, a sponsor or a patron, and how crucial these have been, and continue to be, to the making of art, its dissemination and its accessibility to the public.

Artists from different disciplines who provide brief anecdotal experience are Joseph O'Connor, Jennifer Johnston and Martin Gale. From the RTÉ Archives then Taoiseach Charles Haughey praises the newly opened Irish Museum of Modern Art in 1991, whose establishment was hugely encouraged by donations of artworks becoming available to the state from such benefactors as Gordon Lambert, and the need to have a museum in which to house them.

It tended to be mainly private sources of funding which enabled the arts in the first part of the twentieth Century, most particularly patronage as well as what we today call ‘volunteerism’ and the dedication of passionate individuals, which planted the seeds of much of our current arts and cultural landscape. The establishment of the Arts Council in 1951 would gradually see it become one of our major funders of the arts in Ireland today, as is also narrated in this programme.

By way of considering a particular institution to illustrate how integral a part patronage and funding plays in making an idea a reality, On the programme, I meet up on location with Aoife Ruane, Director of the Highlanes Gallery in Drogheda. She starts by putting the gallery into cultural context, referencing the Droichead Arts Centre and Upstate Theatre Company as well as the strong tradition of singing associated with Drogheda and Louth. Though it opened its doors in 2006, the gallery's earliest patrons were planning and providing for its art collection since the mid-1940s.

Ruane highlights the importance of public and private funding (including Irish Cement, the local Credit Union and McCloskey's Bakery) working together today in originating exhibitions, producing catalogues and touring exhibitions including those of the work of Abigail O'Brien and Janet Mullarney. She also notes the importance of the building and the collection in inspiring new work and the support of the Heritage Council in making the most of its particular character.

I recorded OPW (Office of Public Works) Deputy Art Advisor Jacquie Moore in the store of its collection in St. Stephen's Green in Dublin. It is a relatively modest facility, as so much of the collection is on display in public buildings from Government Buildings to hospitals, Asylum processing offices, court houses and our Embassies internationally. Jacquie provides wonderful details on the character and role of this working collection; the portraits in Áras an Uachtaráin, instigated by Éamonn de Valera; its collection of landscapes; where and how it has acquired and procured its art over the years - from graduate shows to high profile commissions; it's role alongside and complementary to the collections of the National cultural institutions, as well as where and how we can experience the oldest publicly owned collection of art in the country.

Altering States: A 100 Years of the Arts in Ireland, RTÉ Radio 1, Mondays after 10pm

NB: Each programme is wrapped around the signature music of contemporary Irish composer Ciarán Farrell’s composition The Garden, from his RTÉ Lyric fm CD Perfect State. I mention this as many people have been asking about it. 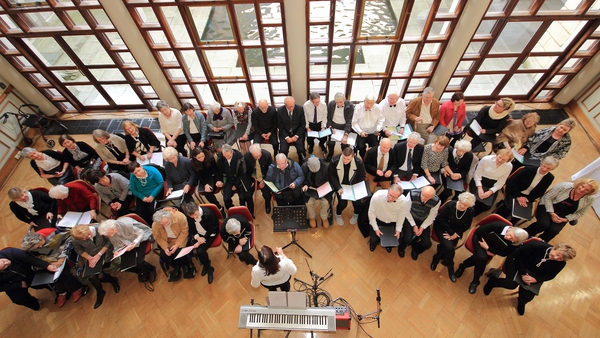 Places Matter - and so does investment in the arts