Snow is not a weather condition we’re used to in Ireland. When it does come, we tend to react with equal parts delight and frustration. Irish snow means unscheduled school closures, inexperienced drivers on snow-bound roads, brief snowball fights and speedily erected snowmen, because only rarely does a 'snow day' turn into anything more than a snow morning, or a snow afternoon in this country. Irish artists have captured some stunning snow scenes over the years, although the genre remains a minor category of Irish landscape art. Here is a selection of the best to be found in Irish public collections.

This painting by Lavery (1856-1941) is cracked down the middle, where the wood on which it is painted has split, but it remains one of the most interesting images in the Butler Gallery Collection. Belfast-born Lavery studied in Glasgow and Paris. He was best known known for his portraits, in particular those of his second wife Hazel, whose image appeared on Irish banknotes from 1928 (as an allegorical figure of Ireland), until the introduction of the Euro.

Souter (born 1929), was raised in Ireland, after her family moved from Northhampton to Dublin in 1932. She trained as a nurse before choosing a life as a painter instead, in the mid-1950s. One of Ireland's most significant, if reclusive, mature painters, her work draws on abstraction but is always firmly grounded in a strong sense of place and feeling, as with this scene. Now in her late 80s, she lives on Achill Island off the coast of County Mayo, where she is still painting.

Meath-born Hamilton (1878-1964) studied in Dublin, Belgium and London, but was most influenced by French Impressionism. By 1945, when this painting was purchased for the Municipal Gallery of Modern Art (as it was then called), she was one of Ireland’s foremost painters, recognised for her abundant use of thick paint and expressive brushstrokes, as seen in the snow-heavy branches of this County Down scene. In 1948 she won a bronze medal in the art section of the London Olympic Games, making her, at 70, the oldest person to win an Olympic medal for Ireland.

Vinegar Hill, near Enniscorthy in County Wexford, was the site of the 1798 Rebellion battle in which the United Wexford Rebels were defeated by the 15,000 strong British side. Nearly 160 years later, O’Malley (1913 – 2003) painted this scene of melting snow and murky fields, from a vantage point on the opposite hillside. Kilkenny-born O'Malley was a self-taught artist who worked as a bank official until the 1940s but went on to become one of Ireland’s best known artists. Other snowy works by O’Malley in Irish public collections include Winter Orpheus (1964) at IMMA, Self-Portrait, Winter, Heavy Snowfall at Trevaylor (1962-63) in the collection of the National Gallery of Ireland and and Hawk and Quarry in Winter (1964) in the Crawford Gallery Collection in Cork

Harry Clarke, The Snow Queen (1916), Collection of The National Gallery of Ireland

Lauded as Ireland's greatest stained glass artist, Clarke (1889-1931) was also a remarkable book illustrator. This image is one of ten original full-page illustrations he did for Hans Christian Andersen's Fairy Tales, published in London in 1916. He was still a relatively unknown artist at the time. A hundred years on, the image retains its vibrant, jewel-like qualities and detail. The Queen glows radiantly as she emanates a frosty chill; the boy Kai stands aside in awe. The core of the tale lies in the conflict between good and evil. Clarke completed the commission around the same time he began work on the windows for the Honan Chapel in Cork.

The focus of this bird’s-eye view of Dublin is the pattern produced by the contrast between light and shade on city rooftops covered in snow. Formed with loose brushstrokes in lithographic ink, it is part of a series collectively entitled Shadows, and echoes the more famous prints Ie Brocquy (1916-2012) made to illustrate Tomas Kinsella’s translation of the Irish Táin in 1969. By time of his death four years ago, Dublin-born le Brocquy was Ireland’s best known painter.

O'Connor (1792-1841) was one of Ireland's best known landscape painters, celebrated in particular for his romantic, atmospheric moonscapes, which can be seen in the Crawford and NGI collections. Born in Dublin, he also lived and worked in London and travelled in Europe during the early 1830s, where he made some of his best work. He specialised in rich, wild scenery and preferred to sketch from nature rather than imagine scenes, so it's likely this cloudy grey-skied ice-skating scene is one he witnessed on his travels.

Magill (born 1959) was raised in Antrim but is now London-based. Her landscape paintings depict non-specific locations, captured somewhere between real-life memory and imagination, to visually stunning effect. Her intention is to evoke a certain feeling or mood. This scene could be fog, as much as snow, -bound, but it combines a feeling of space with one of certain claustrophobia in its depiction of an airy, wintery outdoor place hemmed-in by a whitening sky.

Based in Dublin, Comerford (born 1967), paints scenes that look like stills from a road movie. In this one, headlamps explode in a burst of light as a car approaches on a snow-edged suburban ring-road. Wooden fence posts jut up beyond the crash barrier as city lights blur the horizon at the edge of a clear blue sky. Comerford’s most compelling paintings operate like carefully framed snapshots from a lonely journey, evoking a mood of cool isolation - and this one is no exception

Derry-born McGuinness (1901-1980) trained in Dublin and Paris, where abstraction influenced the strong compositions for which she became known. She was a founder and president of the Irish Exhibitions of Living Art, which began in 1943 to challenge the academic, realist artistic tradition that prevailed in Ireland. This winter scene is typical of her use of close-up still life objects with a landscape opening out behind: in this case, a snow-dusted field to be entered through an open red gate, like an invitation to escape to the mountains beyond. 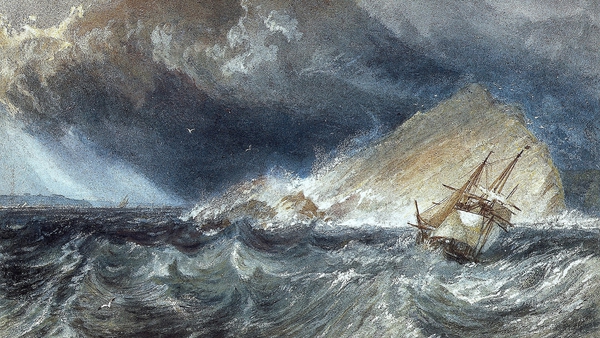