A choice selection of programmes from the RTÉ Archives capture the late, great John Montague in his own words across more than a quarter of a century on Irish radio. His writing and other preoccupations make for fascinating listening, as recurring and new subject matter evolve for him across the years; his experiences of exile, family and history, on his education, on earning a living, on peers and rivalry and nourishing talent.

‘It’s an extraordinary business trying to write poetry. I was aware that since I’m in the ‘ms’ it had to be as good as Milton and in the contemporary scene there is Milosz…I’ve come to read Dante over and over to get closer to him…[but] I think the answer is obviously Shakespeare…’

A regular presenter of the 1970s RTÉ Radio arts series Imprint was Seamus Heaney. Here he is, in an edition of the programme broadcast in October 1972, in conversation with John Montague, his friend and fellow Ulsterman, on the eve of the publication of Montague’s The Rough Field. This poem is considered a major classic of twentieth century writing - started by Montague in 1960, it took over a decade to complete. Montague speaks about the autobiographical aspect of this landmark work, as well as the influences on him of Irish writers including Oliver Goldsmith and William Allingham.

Conversations in the Arts was broadcast a couple of years later, in December 1977. Here, Montague measures up the challenges and privilege of experiencing so much so early in his life. Having been born in New York to Irish parents in 1929, he recalls images of an American childhood full of excitement, "even in such a place as poor as Brooklyn was then" – seeing movies at the age of three, of snow and his father pulling him on a sleigh, and then his abrupt relocation at the age of four to a life lived with his Ulster spinster aunts, as well as the rural idyll of their farm. There, consolation for the breaking up of his family was found in his love of the farm animals and the wondrous nature of this new place.

He speaks affectionately and empathetically of his Tyrone-born father, and similarly of his father’s brothers, catholic nationalists, who had moved to America in the 1920s to earn a living. Montague says "they were condemned… they could never hope to find work in their home place because of their involvement in the IRA and the War of Independence.' As he says "My father was not an ordinary emigrant. He was conscious of, and had a strong sense of incompleteness in himself. He was fond of me - I was the youngest." For that reason, when economic realities meant the breaking up of the Montague family in Brooklyn, Montague’s father decided that the young John would be sent to Ireland to his sisters, and that in time he and his son "walked through these fields together".

Once in Ireland, "Garvaghy gave me a kind of special happiness," he says, "from an urban ghetto [Brooklyn] into a 19th century countryside’. It was only later that he could reconstruct this story: "It was the adventures of the fields, working in the bogs, dropping seed potatoes, this world that began to disappear after the war… I was extremely privileged to experience both of these [worlds]’.

Seamus Heaney once said I was the wind bush of Irish poetry. it means that I could hold through storms and that I am faintly jagged’.

Montague's poem The Rough Field considers the wars between the native Ulster chieftains and the Elizabethan planters of the 16th and 17th centuries, and their impact on future generations. It is his attempt at placing himself and his people in time and history. Of the poem, Montague says "I’m not going to make a pronouncement on it.  It was not written idly… [but] written out of the pain of my family. It grew out of their inheritance - historical and personal pain."

On education, Montague says his aunts hoped he might become a priest - he spent 5 years in Armagh College which he says was retrograde to his previous local school education. "We learned bodily shame," he says, "which I didn’t have ‘til then. It was the war years so we were poorly fed, though that couldn’t be helped’. Two-thirds of his class there later became priests.

On his early writing and poetry:

"My ambitions were not literary, but I was proud of being a gifted scholar. I did best in Latin, but was very good at English". The young Montague had a desire to see the outside world – to widen his experience, to get back to Brooklyn and to see his father. There was a family discussion about where he should go after school – Belfast or Dublin - and it was decided he would go to UCD. There, he came across a group of intellectuals and the college magazine. As he read more, in his words "Something suddenly happened - words became alive on the paper’. His peers were people like Pearse Hutchinson, John Jordan, Anthony Cronin and Pat Brady: "They were different to my background.They had been brought up in the schools of the Republic, (they) accepted things’. Later on, meeting a young Thomas Kinsella would prove massively important to him.

On place and exile:

"I was born into exile. I was transplanted [from Brooklyn] into the area of my father, and then went south." Living in West Cork at the time of the Conversation in the Arts interview in 1977, Montague points out that he is amused that Cork is the largest county in the Republic and that Tyrone, his own county, is the largest county in the North. He is drawn to Cork as an area in which you can contemplate the whole country. "Caoineadh Airt Uí Laoghaire was written in Macroom, Edmund Spencer has his association with the place, The Hag of Beara was written only out the road… [Seán] Ó Faoláin and [Frank] O’Connor was the dominant school when I was growing up." He praises the intelligent colleagues he has in University College Cork where he lectures, mentioning Seán Lucy and Seán Ó Tuama, and the other writers around him such as Thomas McCarthy and Gregory O’Donoghue, as well as Seán Ó Riordáin [who had recently passed away].

The Arts Show presented by Mike Murphy dedicated a programme to John Montague at the time of the publication by Gallery Press of his Collected Poems in 1995.

On the cover is a photograph of himself, and about this Montague enjoys a bit of roguery. "Fascinatingly, it’s the only book of mine with a picture of me on the cover," he says. "I’m a fairly good-looking fellow but I’d never thought of putting my own face on the cover of my books. But my two publishers seemed to have conspired that this should be the time which I strut my stuff," he laughs. ‘It’s not just my photo. There’s also the Irish landscape. It’s outside my house in West Cork. There’s a lovely mountain behind called Mount Gabriel. There’s also a wind bush. Seamus Heaney once said I was the wind bush of Irish poetry. it means that I could hold through storms and that I am faintly jagged’.

In this programme, he also shows his admiration for women poets including Biddy Jenkinson, Nuala Ní Dhomhnaill, Paula Meehan and Eléan Ní Chuilleanáin. He talks about the importance of work and of earning a living - reference is made to his work as a film critic for the Catholic Standard, and as Paris correspondent for The Irish Times during the Algerian War. He mentions that "poetry does not pay her man" and says "I took an early vow that I would not depend on poetry to make a living... [and]made myself into a fairly good lecturer and so on".

His stammer, to which he has referred over the years, first came on when his Brooklyn-based mother first visited him in Ireland when he was seven, an occasion which caused him great upset. He describes as "quite heart-breaking" the poverty in which people like Patrick Kavanagh existed. He refers too to Austin Clarke, who though he made a weekly appearance on Radio Éireann had a family depending on him with very little income. This awareness of the need to earn may well have been articulated in reaction to the views of his father, who told Montague he didn’t like work, and was known to say "You should not do today which you could put off until tomorrow".

First broadcast in 1998, an edition of the weekly radio programme Off the Shelf with Andy O’Mahony featured an interview with John Montague, This recording was made at the time of Montague having just become the first Ireland Professor of Poetry, a chair set up in partnership with the Arts Council of Northern Ireland and The Arts Council of Ireland, Trinity College Dublin, Queens University Belfast and University College Dublin.

The poetry of John Montague is available from www.gallerypress.com. RTÉ Radio will dedicate a programme to John Montague and his work during the Christmas period. 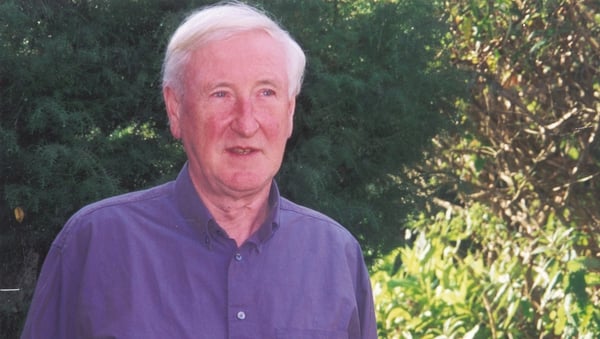