In June 2015, artist Siobhan McDonald travelled to the Arctic Circle to gather inspiration for a forthcoming exhibition. This week’s Lyric Feature, Crystalline, tells the story of that remarkable journey. Here, Siobhan writes about her travels.

The Arctic has an uncanny way of teaching you – forcing you – to live in the moment. In the summer months, the light is permanent and intense – it has magnesium-flare potency. Although everything appears to be motionless and silent, there is always something moving. 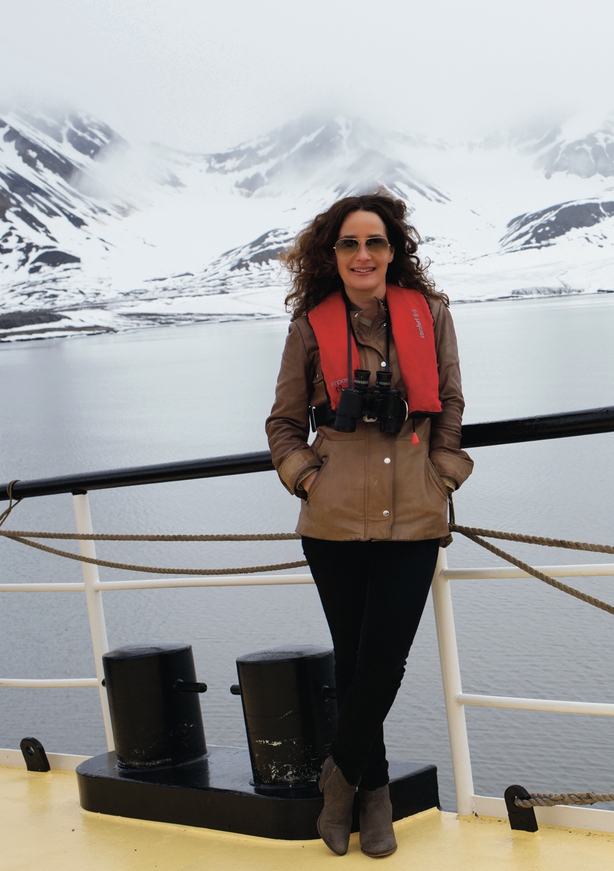 I am interested in the changeable nature of landmass, historical events and their interconnection to time. My studio is at the School of Biology and Environmental Science at UCD where I am working on a series of artworks, painted and photographic, based on my collaborations with scientists such as the palaeontologist Jenny McElwain in the Programme for Experimental Climates.

In early June of 2015 I travelled by Barquentine tall ship around the archipelago of Svalbard as part of the Arctic Circle Residency, to observe glaciers at the edge of the known world.

When the boat departs, and I see the last sight of Longyearbyen, Norway, slip away, I know that I will have no further contact with the outside world for the duration of my voyage – just over two weeks. The ocean opens up in front of us, an enormous expanse of horizon, long enough that there is no problem seeing the arc of the world.

On board there is an extraordinary bunch of international characters all working in photography and the visual arts, as well as education, writing, dance, architecture and poetry. In place there is also a crew of skilled sailors with a cracking sense of humour. My initial preoccupation is with studying the map to get a handle on where we are. The knowledge that the earth is round was well understood by the ancient Greeks. They found their proof in the shadow cast during an eclipse as well as their understanding of the stars. I’ve been exploring the properties of light for the past few years and have taken along a heliograph, designed by UCD physicist Tom McCormack, in the hope that I will record the sun track during the summer solstice at the North Pole.

I am not prepared for the beauty of our first glacier, Esmarkbreen, emerging from the mist, its crystalline structure glowing. Looking at it appears to actually slow down time. I try to sketch it but we’re moving too fast so, in haste, I start to make three-second ink drawings on Indian paper. It’s hard to visually adjust to the whiteness. What is pure white? Is it an actual colour or the absence of a colour? How many shades are there? As I look at the edge of the glacier it gives way slowly to a hue of grey. At this point, the more intensely I look, the darker it becomes and I remember a poem by Seamus Heaney calledHofn, which was written after he flew over a glacier in a propeller plane in 2004. It stayed with me: “We learned that the ice is actually melting. As a ‘child of the earth’, I’ve rarely felt more exposed”. 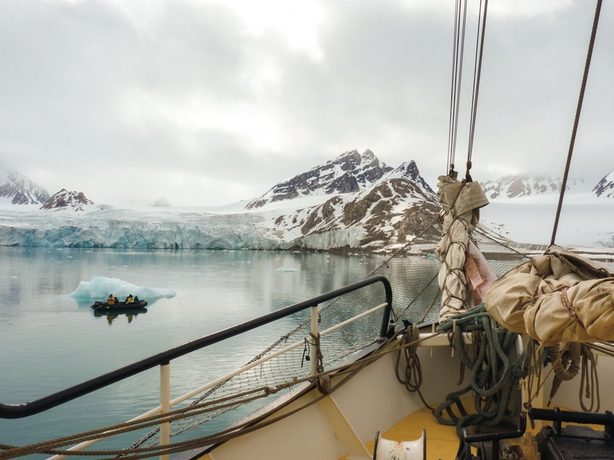 On the boat, we rise daily at 8am for a quick breakfast before dashing to get our gear together. We travel ashore in inflatable motorboats and spend the evenings sailing to our next location. Any land activity is planned so as not to harm the beautiful environment – and so we are not eaten by polar bears. A gun is our only defence against these incredible and powerful animals. Our exceptional guides double as polar bear guards and scope out the path of our daily expeditions. Although shooting a bear is the very last thing you would do. The melting ice cap is already driving these animals off their hunting ground and it’s unlikely they’ll survive beyond 20 yearsfrom now.

It is because the regimes of light in the Arctic are so different that I start to lose all track of time. Sleep deprived but energised by the sun, I read Arctic Dreaming by Barry Lopez and land on a brilliant description of the light here. It is so bright, notes Lopez, “that the eyelid by itself is no protection. You sleep with a strip of felt tied over your eyes”. This brightness, he explains, is because the air is largely free of residue and dust.

My days are spent actively immersed in the physical nature of the Arctic world and its wildlife. As I walk over ice fields and mountains, examining objects eroded by the weather, I am acutely aware of the richness and fragility of this ecosystem. The sound of the sea ice moving is gentle and pervasive. On occasion the volume increases to a grinding pulse of ice against ice.

On the seventh day, summer solstice, I obtain the most exquisite sun tracks on my heliograph. As the expedition nears its end, I finally have sea legs under me. My footprints on the shore are gone now, absorbed by the endless movement of ice and weather. I look at my small sketches and think of the moments of quiet and the things that made me pause.

Back in my studio, I am now working on a solo exhibition for the Centre Culturel Irlandais in Paris, curated by Helen Carey. The installation-based work, developed in association with The European Space Agency (ESA), touches on my physical journey through this exceptionally fragile region. In spring, I completed a residency at ESA in Amsterdam, and one at the Centre Culturel Irlandais in Paris. The Institute of Physics in Ireland has sponsored me to develop a publication, Crystalline, which seeks to explore the disappearing landscape of the Arctic with drawings and photographs alongside texts by writers including Tim Robinson.

The experience of being there, in the presence of such beauty and strangeness, was revelatory to me and I want to distil what is ephemeral and essential in this frozen landscape, to draw attention to the porous nature of reality and the tipping of natural balances in the North Pole.

Originally published in The Gloss. Listen to The Lyric Feature: Crystalline, produced by Claire Cunningham for Rockfinch here, and find out more about Siobhan McDonald's work here.