Macnas is a creative ensemble based in Galway who have blazed an artistic trail around the world ever since their foundation in 1986. The company was born out of a wild, raw new energy in the mid-eighties by Padraic Breathnach, Ollie Jennings, Pete Sammon and Tom Conroy. They quickly gathered a large tribe of wizards, creatives, and visionaries around them and created a magnanimous story which still continues. 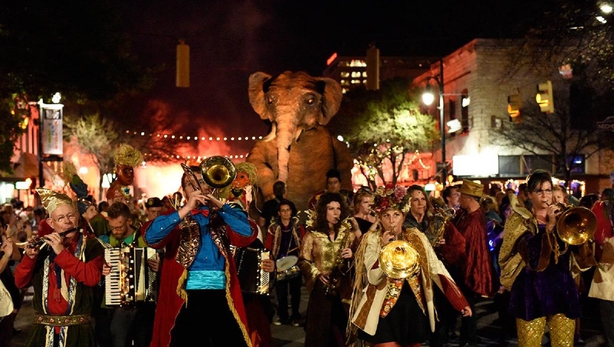 The company first made a big splash in the 1980s when it floated a 30-foot Gulliver down Dublin's River Liffey. The next big bang was touring with U2 and appearing at the MTV Music Awards in the 1990s, going on to celebrate the Millennium by suspending a giant baby over Times Square in NYC. In the 2000s the street arts traders descended upon theatres and warehouses to deliver a series of award-winning shows, trading outdoor for indoor spectacle. Since 2011, Macnas have walked a 15-foot-tall Boy Explorer and his butterfly across Australia on a quest for brilliant ideas, brought in the Chinese New Year in Beijing, amazed the public in London with a 20-foot-tall giant, and in 2016 became the first spectacle company in the world to premier at the renowned SXSW Festival in Texas. Macnas continues to pioneer innovative work across the streets of Ireland and across the streets of the world.

I joined the company in 1993, the same year Macnas toured with U2, and my first parade was Noah's Ark. The Diceman (AKA Thom McGinty) played God that year, and it was all very exciting for a Galway girl!

After that Rod Goodall and Padaric Breathnach decided to do a touring street show Moby Dick - and I was cast as Captain Ahab. I had the best craic of my life racing around the country in a giant boat to every town, city and village, with a face full of glue gum, a beard rash and a fibreglass leg. I was a young woman transformed into an elderly bloke, it was pure Macnas mayhem.

One of my favorite moments was having a drink with some of the cast in the Tobar in Galway and seeing Peter O’Toole at the bar. He had come to see the show and complimented the guy who played Ahab. We had great gas when I told him I was the girl who played the shark slayer!

At 24, I was the first woman in the company to direct a Macnas parade in 1998 and that year legendary actor Ray McBride played the King of the Fools. Eleven years later in 2009, I returned to a different landscape, and out of that a whole new Macnas direction was born.

Now I have the privilege of working with the next generation, a company still bursting with boundless energy as our Macnas Young Ensemble, our 18 – 30 year old engineers of imagination, conjure brilliance and beauty alongside the established Macnas artists.

This year the Young Ensemble, who have worked with us since their teens, premiered a wonderful odyssey of invention and theatrical vision, performing their first fully-fledged Macnas show in a disused Galway printworks as part of the Galway Theatre Festival as well as touring with the company to London. bringing Crom the Giant to Trafalgar Square. This is what makes Macnas thrive.

And, as the artistic director of this shed of invention it’s a joy to be a guardian of this legacy.

Savage Grace, this year's Macnas Halloween Parade, will take place in Galway on Sunday 30th October 2016. The following day, Monday 31st October,  Macnas will close the Bram Stoker Festival in Dublin for the third year in a row with a citywide procession, Sleep No More.

To celebrate their 30th anniversary, Macnas invite the public to share their favourite memories of Macnas parade moments since in 1986, with just a couple of lines telling them which parade was special for you and why. You can post via their Facebook page, Twitter or on Instagram using #macnasmemories.