Crime of Passion is the debut novel by Oscar-nominated film-director John Boorman. Set in the auspicious Cannes Film Festival, Boorman brings the reader into the world of film director Daniel Shaw and his long-time friend and collaborator Jack Diamond. Together, they have made well-received movies, but none have achieved commercial success. In a last ditch attempt at success, Daniel and his writer concoct a script they hope is sexy and violent enough to attract a mass audience. They call it Crime of Passion.

Shadow of a Smile was the 8 PM film in competition at the Cannes Film Festival and its director, Daniel Shaw, stepped on to the red carpet alongside his star, Alison Mulhoney. Her full-length frock cascaded in frothy layers to the carpet, and when Daniel offered her his arm he inadvertently trod on one of the dress’s trailing effusions. Alison shot him a withering look before summoning the radiance she needed to present to the three hundred photographers banked up on both sides of the red carpet.

Daniel looked back and beckoned his wife, Hope, to join him. She shook her head and clung to the comfortable arm of the film’s producer, Jack Diamond, whose other arm supported his wife, Bella. They watched Alison swirling and posing for the frantic snappers.

‘How about the Goddess of Eastman Kodak?’ said Bella.

‘Eastman Kodak is on the skids,’ said Jack Diamond. ‘Film is finished. Those cameras are all digital.’

The projection of Shadow of a Smile was drawing to a close. On the screen in tight close-up, the luminous Alison Mulhoney shed a single teardrop, which the forty-foot screen magnified to the size of a ping-pong ball as it made its slow-motion journey down her high cheekbone. Daniel recalled that after thirty takes he had given up on getting Alison to cry. The tear was CGI, a computer-generated image. That globe of saline water had taken two operators eighteen hours on their terminals to get right and had cost $30,000 – and to Daniel it still looked fake. It looked like a tear all right, but not hers. It came out of her eye as though escaping incarceration.

‘Now?’ Alison asks her ailing lover, who, a wider shot, reveals is cradled in her arms in a composition nudgingly like the Pieta of Michelangelo.

She pushes the needle into his arm with a gasp that Daniel hoped would metaphorically suggest sexual penetration. As the lethal dose of morphine floods his bloodstream, her lover sighs in post-orgasmic content.

As the end credits crawled up the screen, applause erupted. Daniel had had other pictures in competition at the festival, and he knew that almost every film was applauded. He squeezed Alison’s hand. Both their hands were moist with the cold sweat of anxiety. They slipped and slid together like miniature sumo wrestlers. In a spirit of equity, he groped for his wife’s hand on his other side, but it was not on offer. The event was being televised close-circuit in every bar and festival office, every hotel room, and somewhere amongst the forty thousand press, forty-five thousand producers, distributors, actors and directors, she knew that her jealous lover would be keeping an eye on her.

At this moment, more than anything else in the world – even the Palme d’Or or his wife Hope’s estranged affections – Daniel wanted to urinate. This would become a dilemma in the next few minutes because the applause, sitting or standing, its intensity and duration, would be carefully measured and noted, and affect the fate of the film. He would urge it to go on, but for the sake of his bladder, he needed it to be over. He regretted his lack of restraint at the champagne reception before the screening, where all those whose fortunes rested on Shadow of a Smile had gathered to fortify themselves for the ordeal.

The applause faltered, then a spotlight illuminated Shaw and his star. Pierre Dachenet, the gloomy French press attaché, sitting behind Daniel, leaned forward to hiss in his ear, ‘Stand up.’ Daniel stood; so did Alison. The applause surged. He turned and bowed to the crowd and flapped his hands in an upward motion, urging his producer, Jack Diamond, and writer, Brad Tullio, to rise too. They both stood and bowed. The applause flagged again. The credits on the screen were celebrating the contributions of the Honey Wagon driver and Alison’s masseur. Pierre hissed to Daniel, ‘Kiss Alison, kiss her.’ Daniel obeyed and Alison hugged him, wallowing in the rising applause. She had the ecstatic radiance of Bernadette communing with the Holy Virgin. Daniel noted that at last she was truly beautiful. After all those weeks of cajoling, bullying, pleading, flattering, tricking her into a performance, wanting to love her but never achieving even affection, she was now incandescent. His heart opened to her. He looked into her eyes, eyes that shot past him to the blur of faces offering her adulation. He did not exist.

Now, having watched the film with the eyes of an audience, he knew that it did not quite work. The history of the project unspooled in his mind as the aural flattery of applause rattled around his ears; the thrill of the first idea, the excitement of writing the script with Brad Tullio; they had both felt that this was the one, the Ur-movie they had been put on this earth to make. He had wanted Kristin Scott-Thomas, but the financiers had demanded a bigger star. Alison was wrong for the part but he had compromised, since it had been the only way to get it made. In the happy expectation of shooting in Manhattan, he had rented an apartment and put the children in school there, but it had proved too expensive to shoot in New York, so they ended up faking Manhattan in Bulgaria, with post-production in Stuttgart in order to get German tax-shelter money.

Hope, his wife, was stuck in New York, and he hardly saw her or the children for eight months. Feeling abandoned, she took up with an old boyfriend, Paul, whom she had known when she was single and working as a dancer. What had started out as an escapade to spite her husband had developed into an exquisitely painful love affair. ‘Film is war,’ as Sam Fuller defined it. ‘You shoot and are shot at, battles are won and lost.’ You hope that the film is not fatally wounded by compromise.

The three thousand black-tied, ball-gowned members of the audience dutifully kept the applause alive but, despite Pierre’s protestations, Daniel led his team from their seats up the long aisle towards the exit. Cannes protocol demanded that no one leave until the director and stars had left. There are further rituals back on the long red carpet, where the insatiable photographers await the disgorging stars, and behind the snappers, the fans, the autograph-hounds and the mildly curious.

But Daniel had to pee. Following him blindly, his entourage found themselves piled up at the entrance of the men’s toilet. 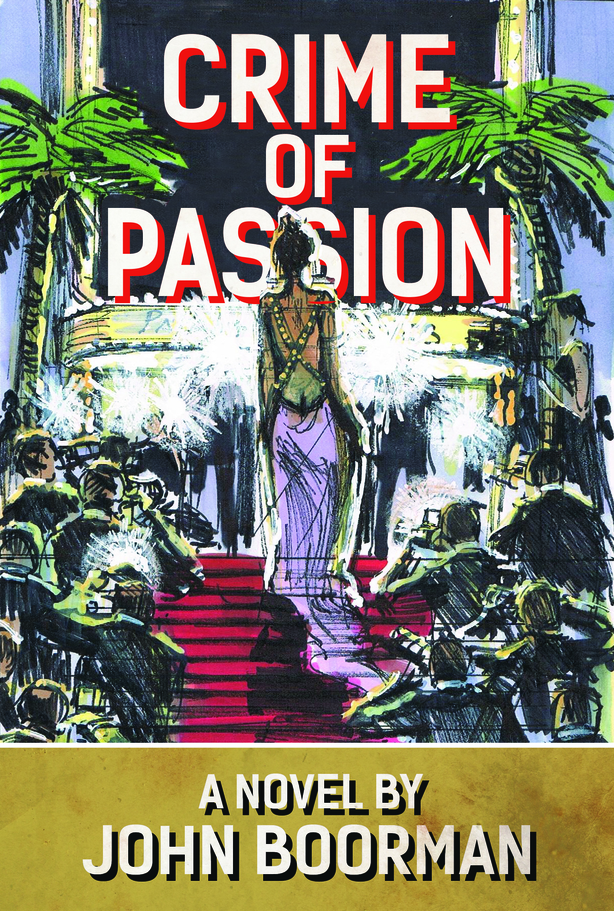 Crime Of Passion by John Boorman (published by Liberties Press) is out now.